According provided by The YONGNUO YN85mm F1.8 lens (YN85mm F1.8 N model) is very grateful to Dmitry. Here here on OLX from him you can buy a large number of various photographic equipment YONGNUO and not only. Dmitry has many positive reviews and is always ready to prompt and help. 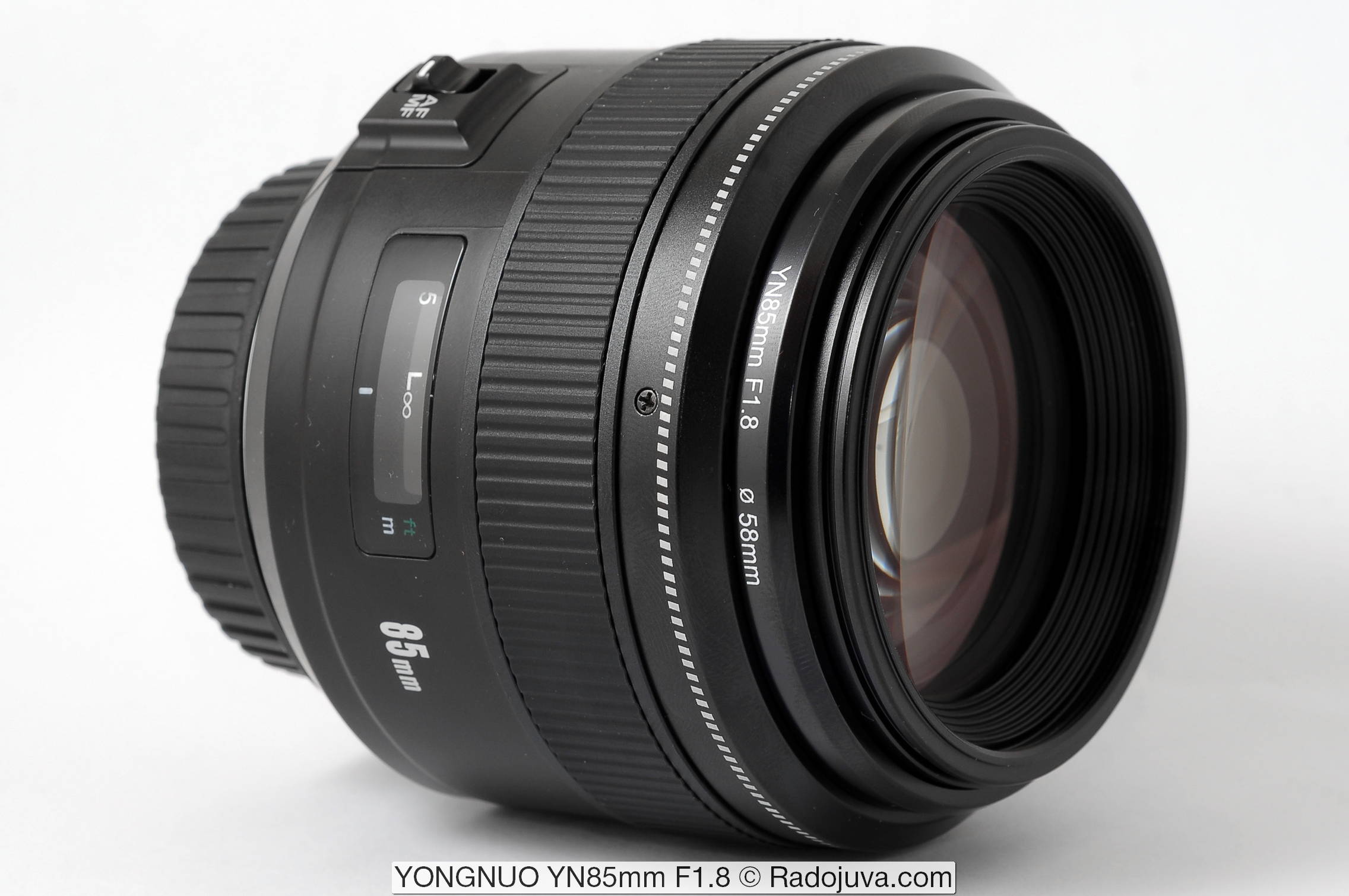 The YONGNUO YN85mm F1.8 lens (YN85mm F1.8 model) in the review I will call in abbreviation - 'Yongnuo 85 / 1.8'. Important: on Radozhiv there is already a review of the version Yongnuo 85 mm 1: 1.8N for Nikon cameras, but the Canon version has a number of differences, described in the section below. 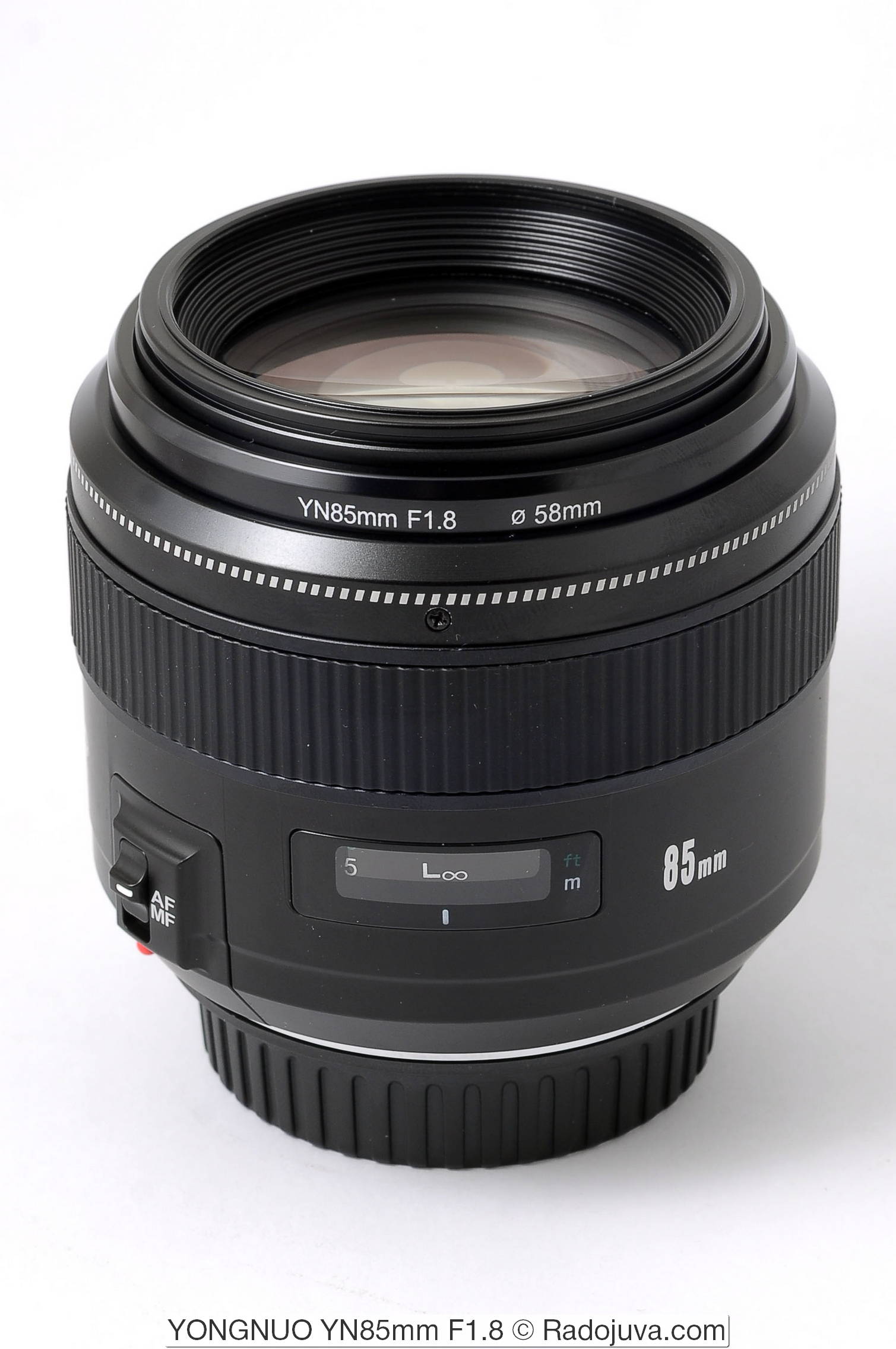 In general, Yongnuo 85 / 1.8 is a replacement for the original Canon LENS EF 85mm 1: 1.8 USM from which his appearance was copied. But the original lens is still better.

In its parameters, the Yongnuo 85 / 1.8 is a very attractive lens for amateur photographers as an inexpensive creative lens, primarily intended for portraiture. 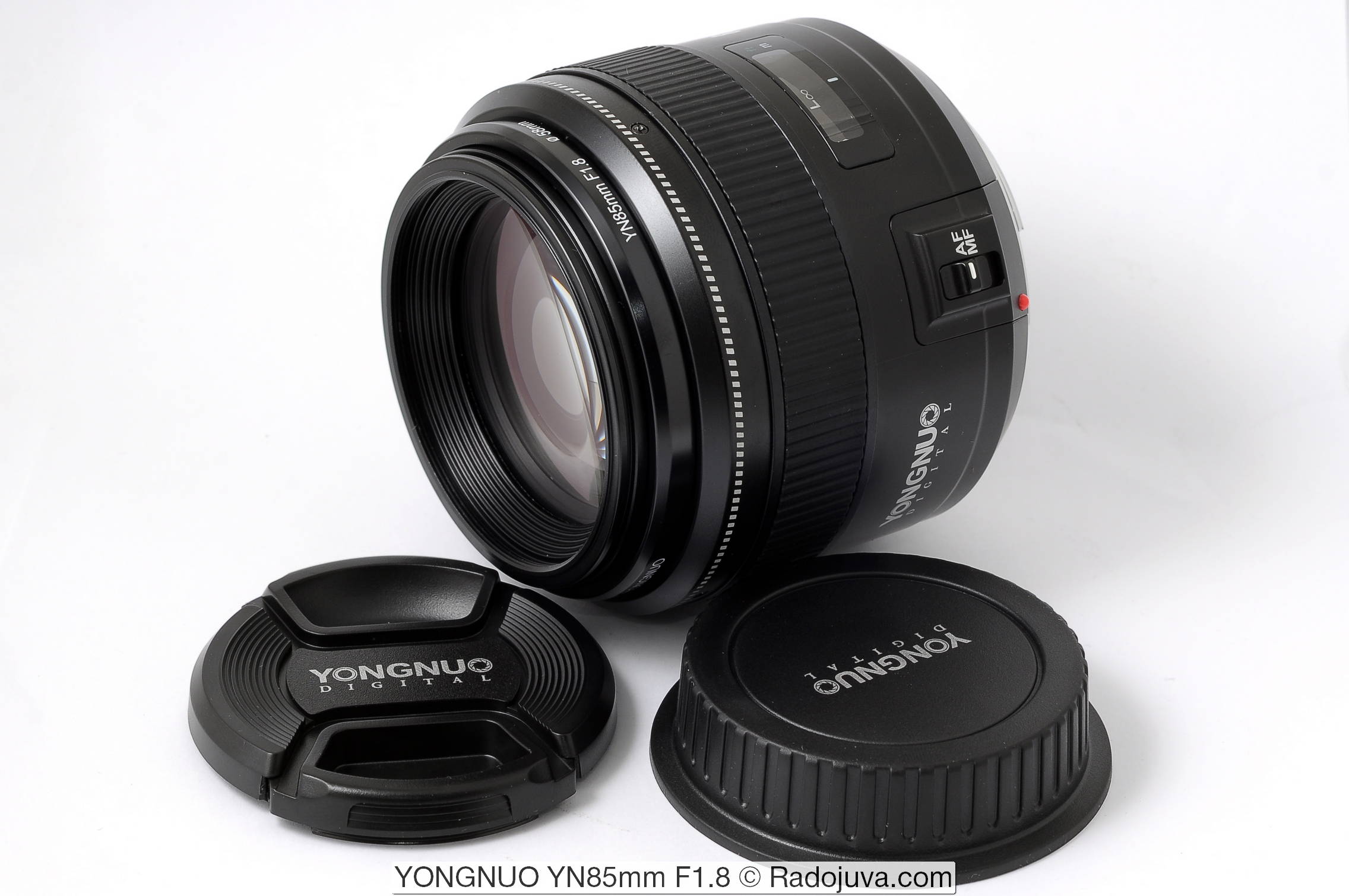 YONGNUO YN85mm F1.8 (model YN85mm F1.8) for Canon EOS cameras was announced in February 2017 of the year. FROM October 2018 a new subversion is released that is cured of focus problems in Live View with some Canon cameras, as well as improved performance with adapters Canon EF-EOS M. The new version is no longer fundamentally different. Most likely, the review shows me an updated version, since it was made in December 2018. Lenses are found in different boxes: white and black and gold.

Differences from the version for Nikon

Differences between the Yongnuo version for Canon and Nikon (Yongnuo 85 mm 1: 1.8N) turned out to be quite a lot:

In general, the version for Canon was more successful. 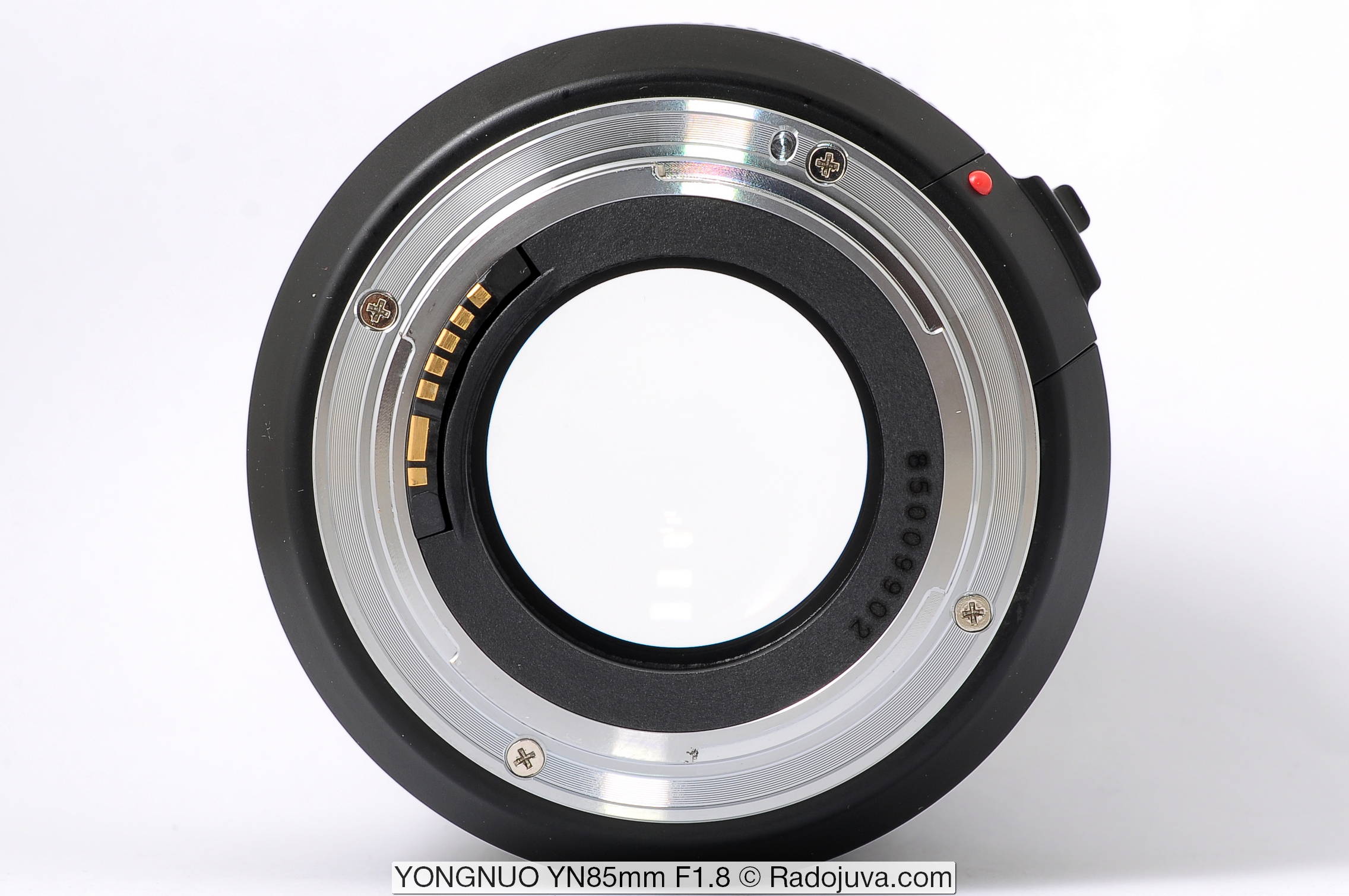 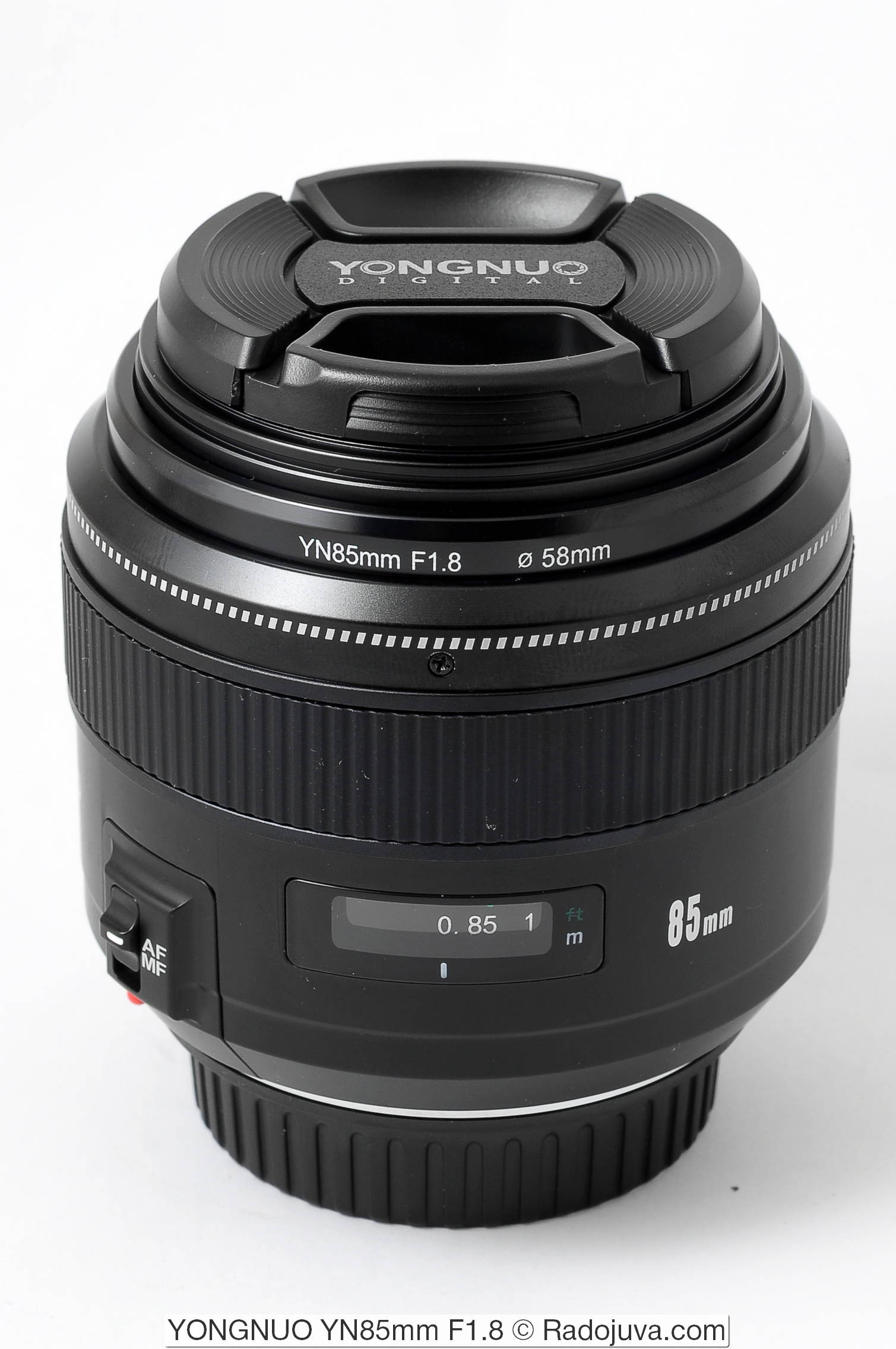 In terms of focal length, the Yongnuo 85 / 1.8 is a cross between a short telephoto and a standard lens. Yongnuo company refers it to standard fixes (standart fixed focal lens), and the model Yongnuo 100 / 2 already to short / moderate telephoto (medium telephoto prime lens).

Real indicators of aperture (T-feet) are quite large, and are at the level of T / 2.0-T / 2.23. During focusing from MDF to infinity, the decrease in aperture, expressed in T-stops, is not felt at all. 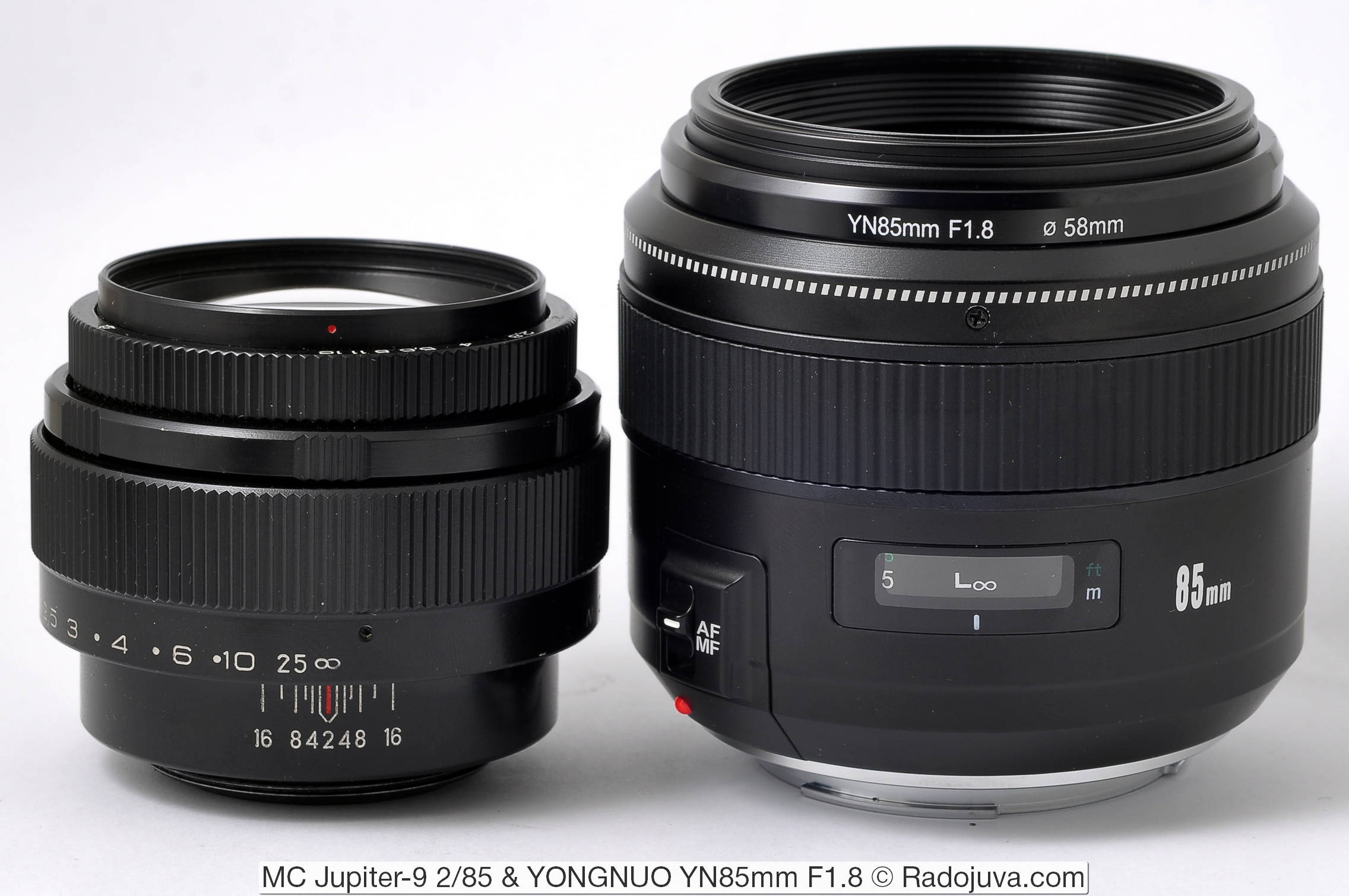 The lens came to the review completely new in a black and golden box.

In a small box is a warranty card, a certificate of quality control, instructions in Chinese and English, a carry case, a bag of desiccant and the lens itself with a front (YN-58) and a back cover. This is the first lens from Yongnuo, in which the front and rear lenses of the lens were not initially covered by special transport films.

Unfortunately, there is no hood in the package. But the lens can use YN-ET-65 bayonet hoods or Canon ET-65III (indicated in the instructions).

Unlike Yongnuo 100 / 2 and many other Yongnuo lenses, Yongnuo 85 / 1.8 model does not support firmware update via USB port.

Important: with high-speed shooting, more than 5 frames per second, the aperture blades do not have time to completely close and open. On F / 18-F / 19 apertures, the diaphragm closing mechanism closes and opens the diaphragm for a rather long time. On some cameras, this may lead to an error on the camera display or to an incorrect exposure. 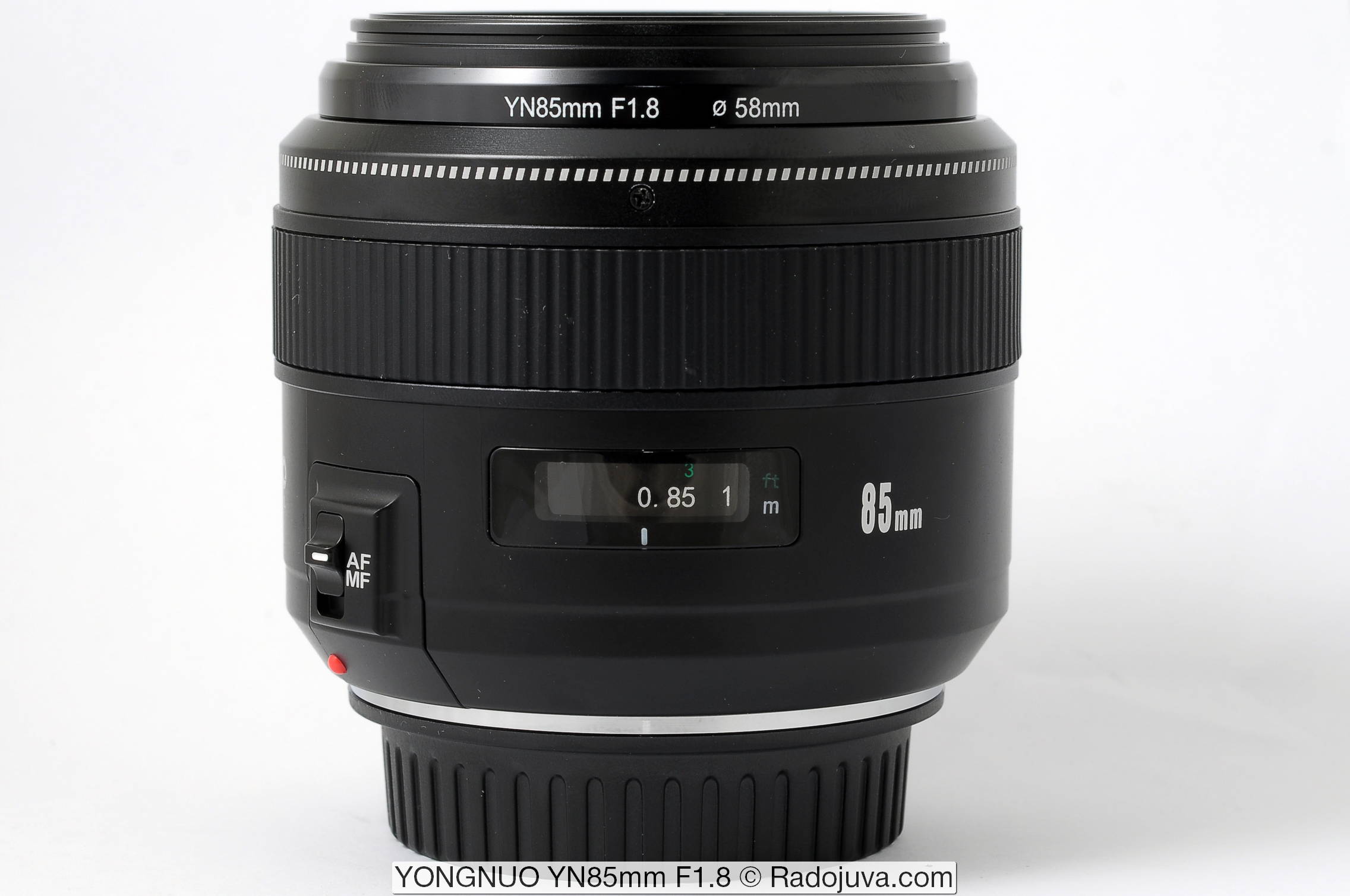 For focusing, Yongnuo 85 / 1.8 uses micro motor and is an analog of Canon MM (Micro Motor). Auto focus will work with any SLR camera Canon EOS. Most likely, mirrorless cameras with an appropriate adapter should not have any special problems.

When focusing the motor is very noisy. Noise unpleasant and annoying.

The focus ring is rubberized and in manual focus mode rotates approximately 135 degrees. Upon reaching extreme positions, the ring does not abut, but continues to rotate freely. Focus ring spinning very tight. During manual focusing, you hear 'plastic rubbing against plastic or metal', friction noise is unpleasant. Manual focus uncomfortable. The focus ring travel is heavily 'knocked into a heap' in the range of 2-5 meters, which requires a very, very thorough rotation. The direction of rotation of the focus ring is the same as the original Canon LENS EF 85mm 1: 1.8 USM.

There is a 'AF-MF' (auto focus / manual focus) mode switch on the lens body.

Lens supports continuous manual focus control. This function is similar to the Canon FTM function of the original lenses. Some features of working with FTM are described in detail for me in the Canon 24-105 / 4 L IS USM lens reviewwhich also possesses FTM.

Lens has internal focus, the front and rear lenses remain stationary during focusing. It is possible to use various filters without any problems. I easily used a Yongnuo 85 / 1.8 with a polarizing filter HOYA 58mm PL-CIR.

The lens has a window with a focus distance scale in meters and feet. The number of values ​​on the scale is small, the scale itself is not very useful. There are values ​​only for 0.85, 1, 1.2, 2, 5 meters and an infinity mark. 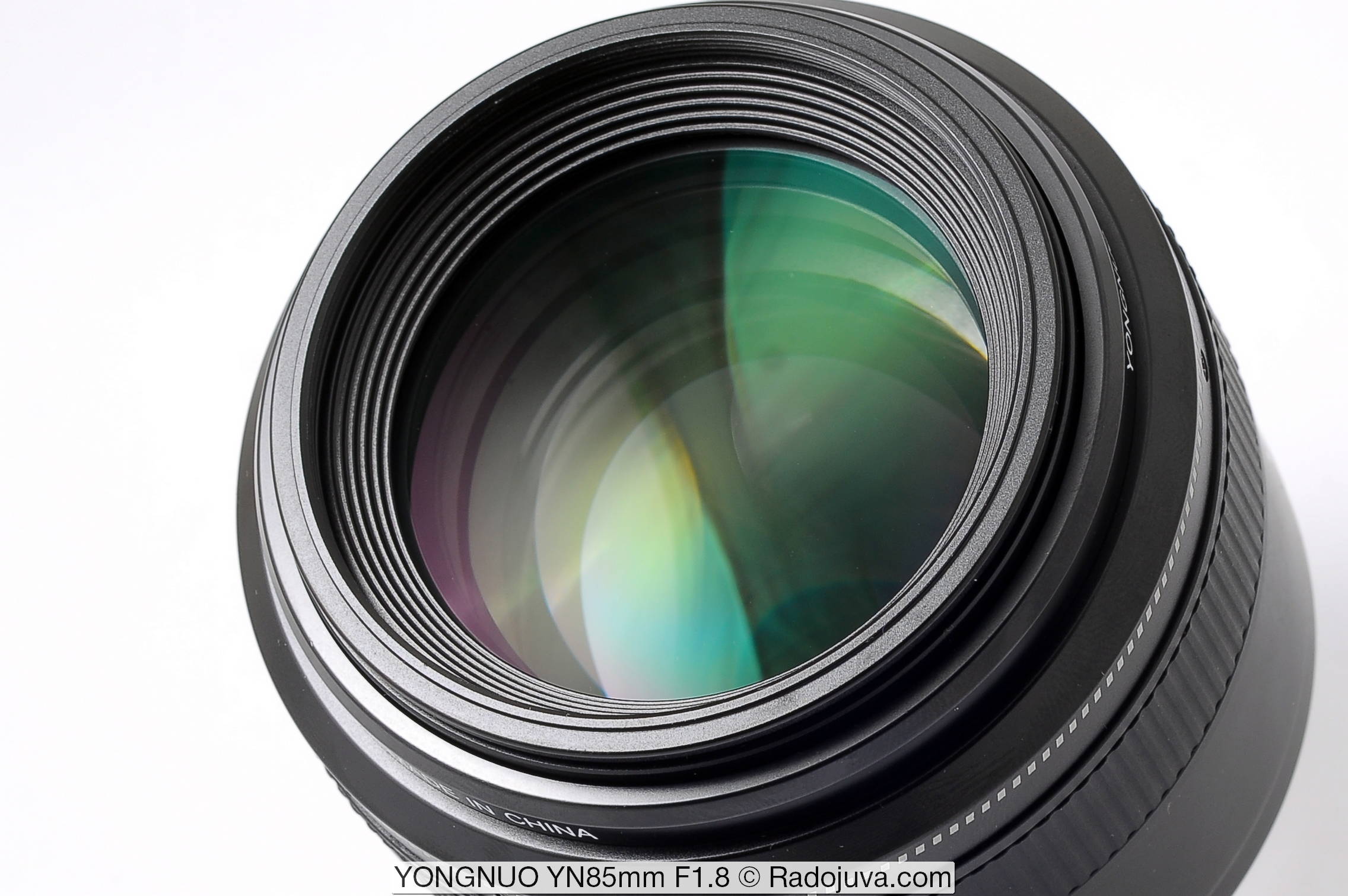 Typically, some Yongnuuo lenses copy the optical design of older Nikon / Canon lenses to achieve comparable image quality. Many people believe that the optical scheme of Yongnuo 85 / 1.8, like its appearance, is copied from the original Canon 85 / 1.8 USM. But the original Canon 85 / 1.8 USM uses the 9/7 circuit, while for the Yongnuo 85 / 1.8, the 9/6 circuit is used with the diaphragm placed elsewhere. The schemes are similar, but differ in the rear pair of lenses.

It is very suspicious that Yongnuo 85 / 1.8 was announced exactly 25 years after the announcement of the original Canon 85 / 1.8 USM. Most likely a quarter century difference is due to patent obligations.

Optically, Yongnuo 85 / 1.8 did not go far from the original Canon 85 / 1.8 USM, with the exception of certain additional flaws in the Chinese counterpart.

There is no lens profile for the lens in popular RAW converters, but most likely the profile will appear shortly or you can create it yourself. 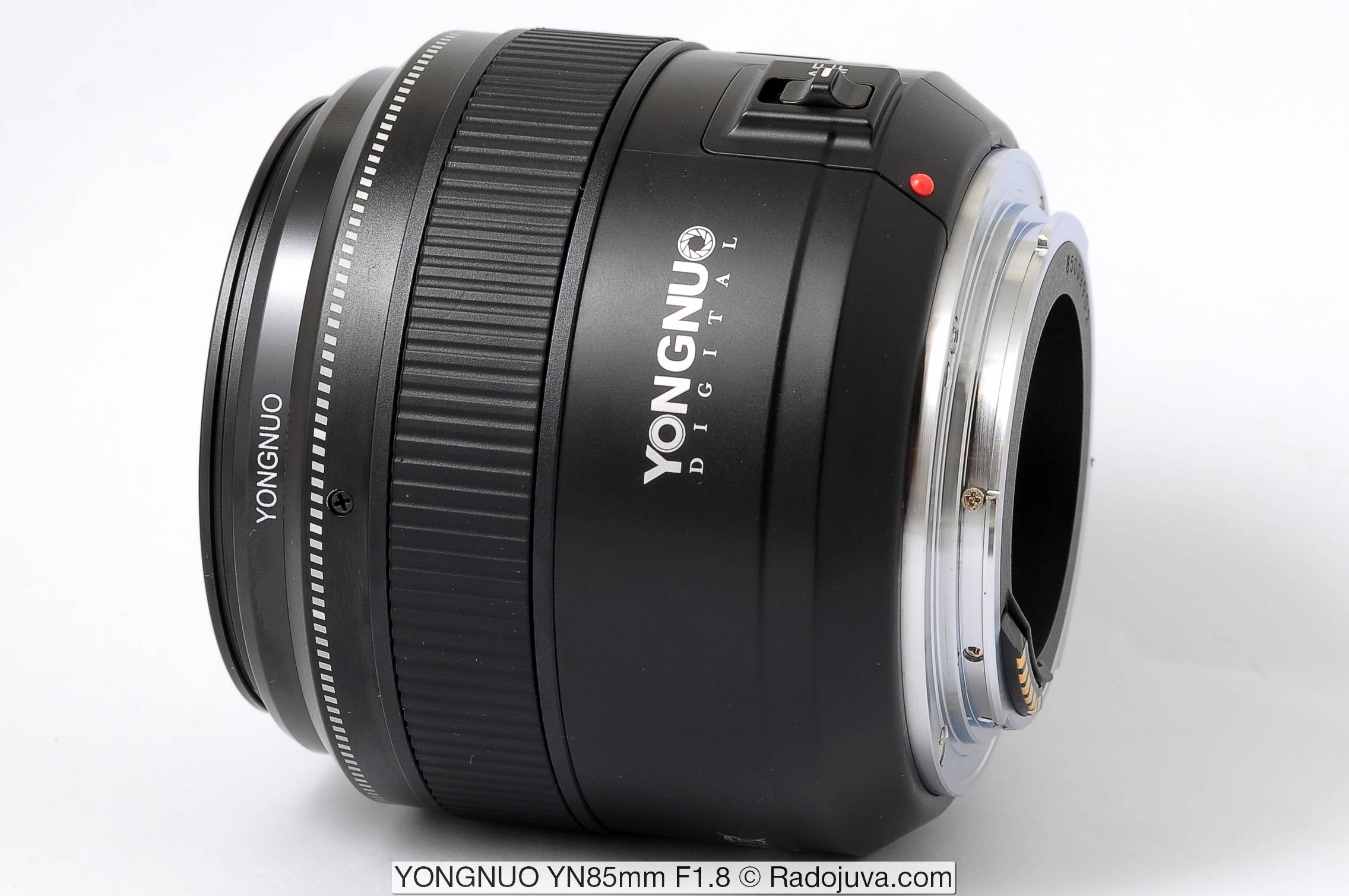 Original RAW ('.CR2') photos can be download from this link (79 photos, 1700 MB). thanks Anna Faleeva for organizing a small workshop. 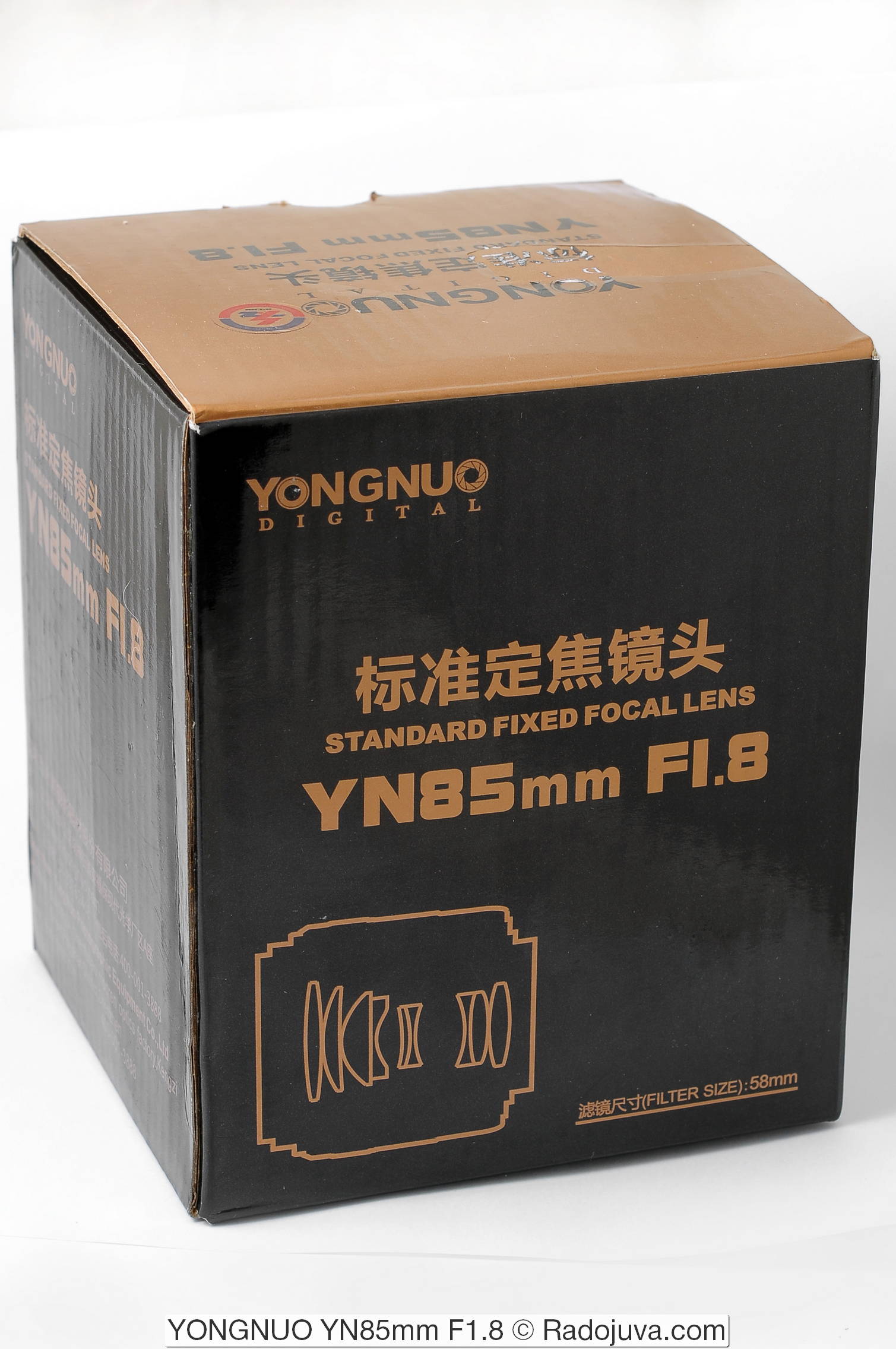 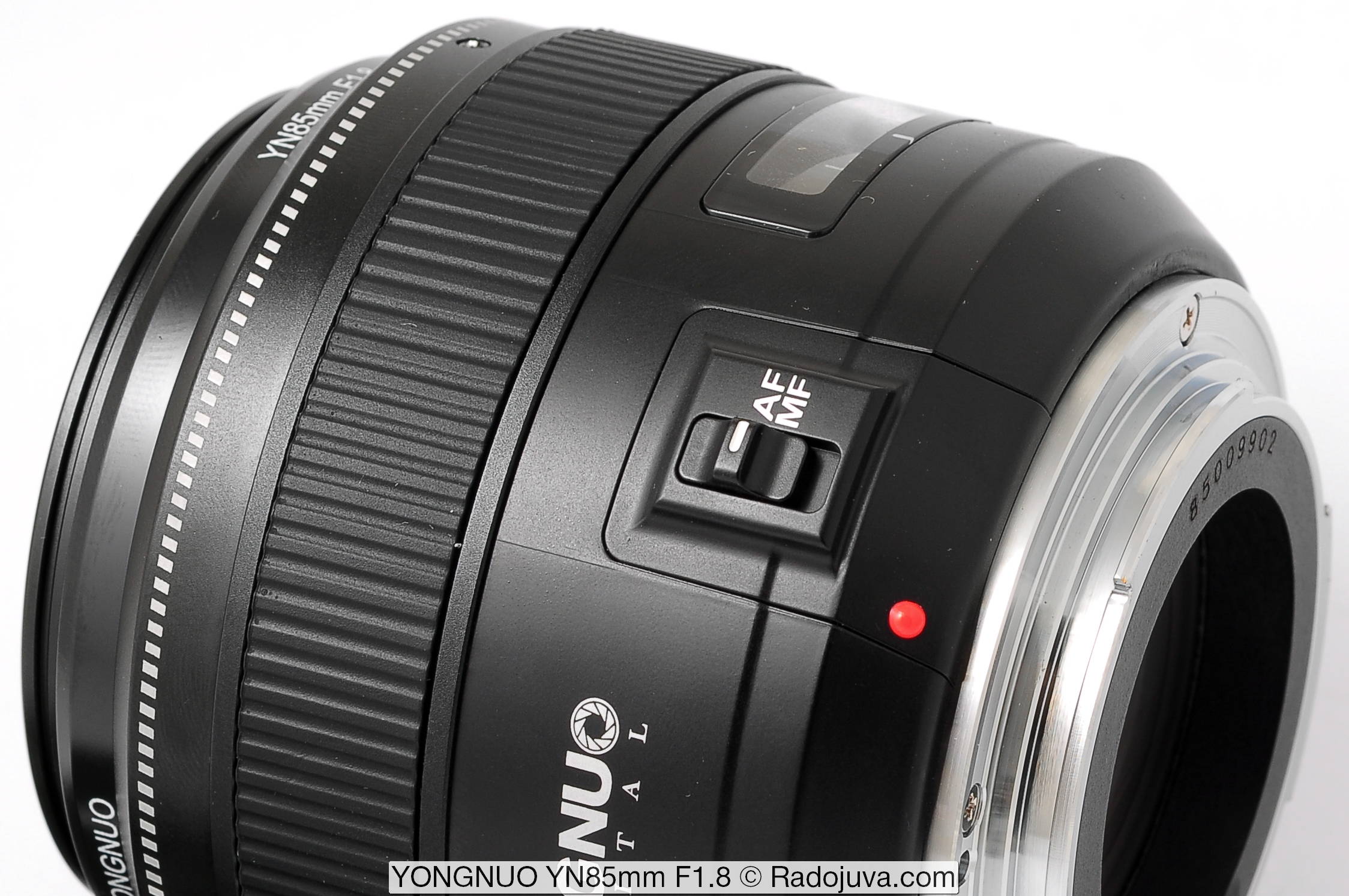 Lenses have almost the same weight, the same diameter of the filters, the same MDF, maximum magnification factor and the same number of aperture blades. 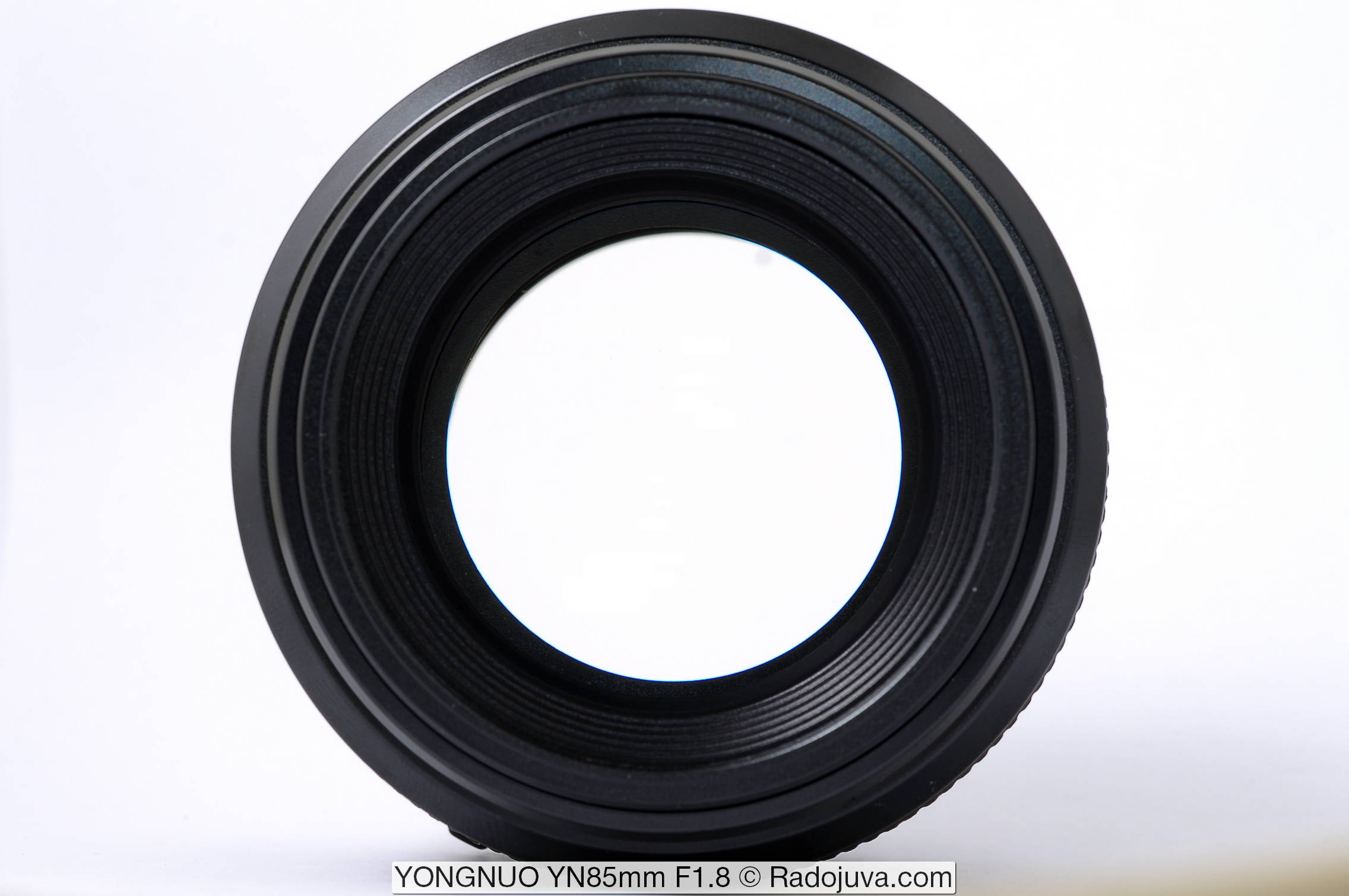 Choosing a good portrait lens with a focal length of 85 mm is very important for a large number of photographers. I pay a lot of attention to this issue, because I prepared this list of all such autofocus lenses for full-frame cameras:

Sony / Minolta (A or E mounts) 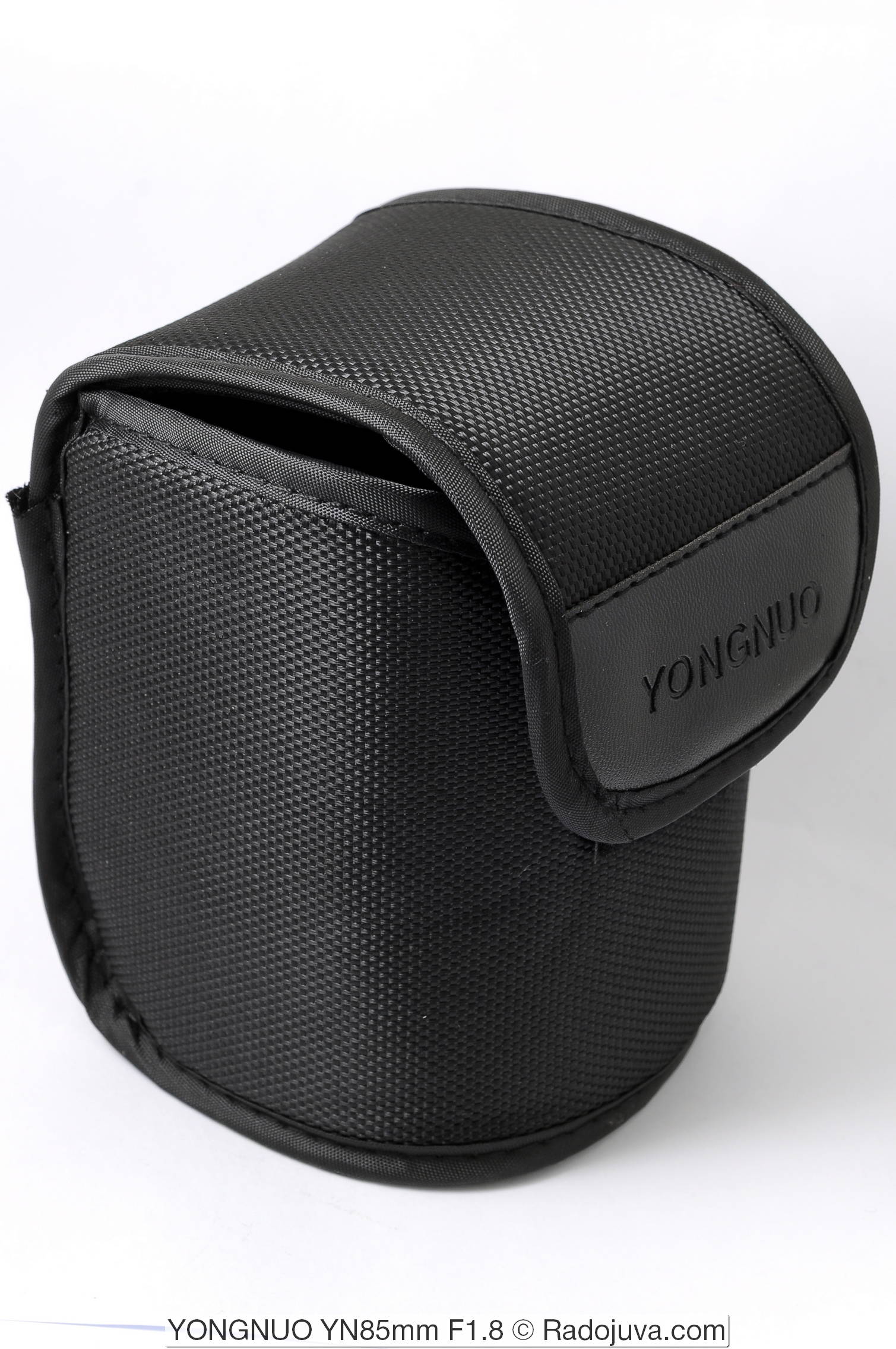 You can also see prices at E-Katalog on this linkor in the price block located below:

Yongnuo lenses in the Nikon / Canon version often differ in a lot of small things. Yongnuo 85 / 1.8 is no exception. In general, the version for Canon, even though it is 2 years older than the version for Nikon, turned out better.

Most likely 25 years that have passed between the announcement Canon EF 85 / 1.8 USM and Yongnuo 85 / 1.8, are related to patent obligations.

On Canon APS-C cameras, the EGF of the Yongnuo 85 / 1.8 lens will correspond to about 136 mm due to crop factor. On crop, it is almost a real 135th weave, such EGF is quite convenient for portrait shooting in open locations.

Here on the site, comments do not require any registration. In the comments, you can ask a question on the topic and you will definitely be answered, and you can also express your opinion, leave your feedback or describe your experience. For the selection of photographic equipment, I recommend E-Catalog. Many little things for the photo can be found on AliExpress. 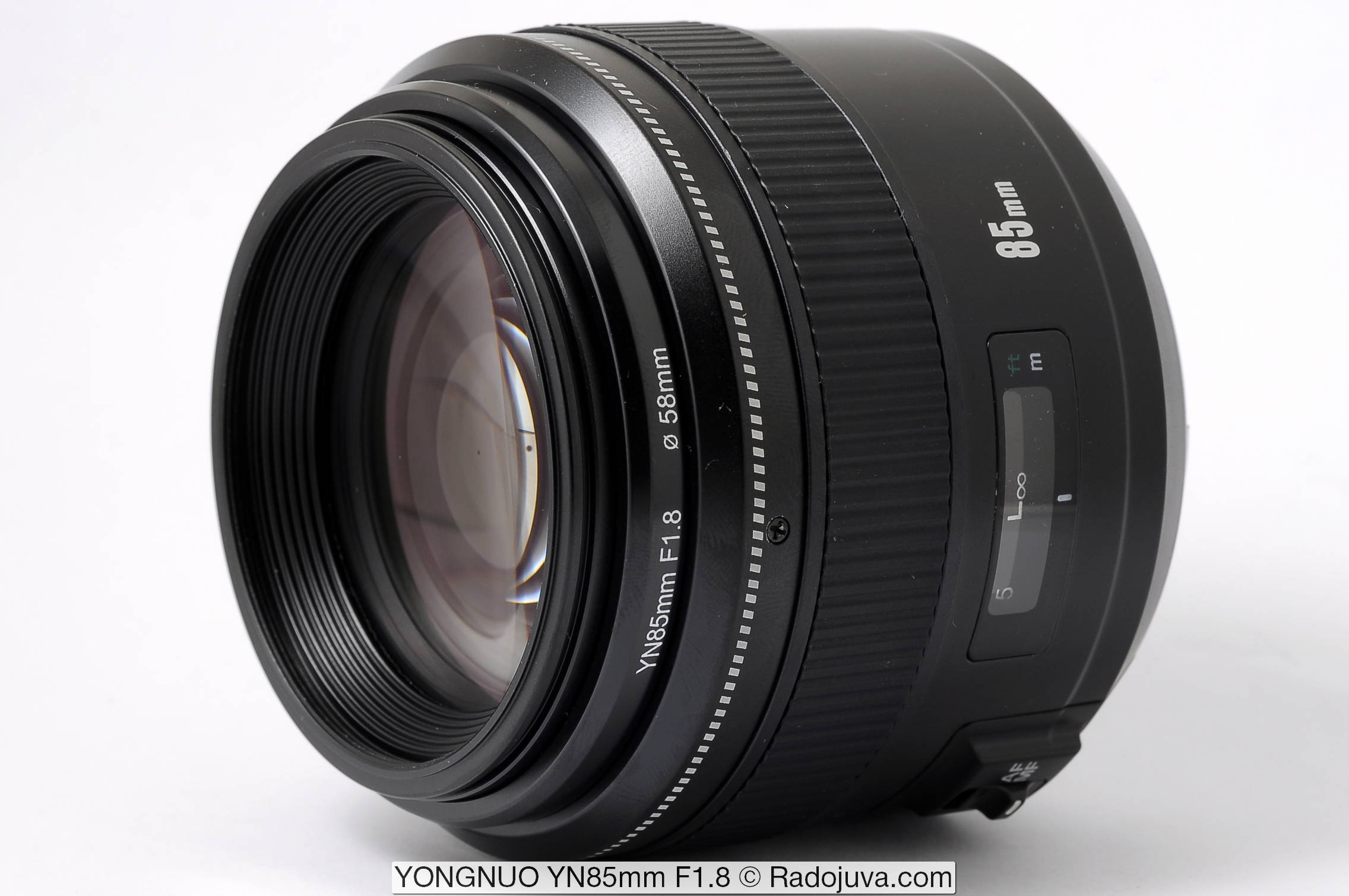 The material was prepared by Arkady Shapoval. Take a look to the Radozhiva group on Facebook.