LOMO T-43 40/4, adapted for cameras with EF mount. Review from the reader Radozhiva

Overview of the LOMO T-43 40/4 lens, adapted for cameras with an EF mount, especially for Radozhiva, prepared Rodion Eshmakov. 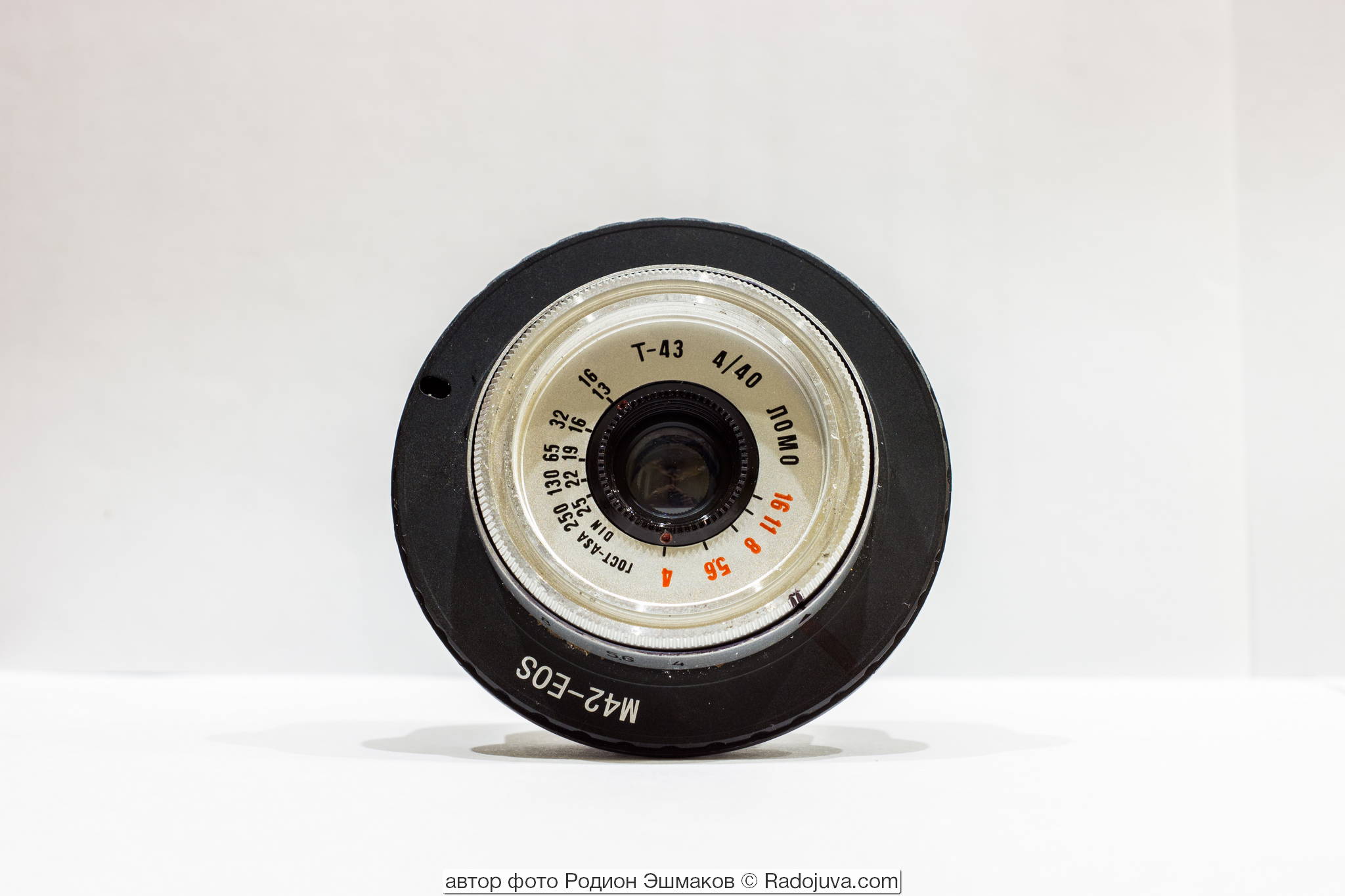 Appearance of the adapted lens

LOMO T-43 is the lens of the world's largest Smena-8M camera, the number of released copies of which exceeds 21 million. Smena-8M is currently considered to be perhaps the most affordable film camera, however, the camera itself is almost never used for its intended purpose (due to the lack of a mirror / range finder, exposure meter) or its lens - it is non-removable and does not fit without adaptation to modern cameras.
Relatively recently, information appeared on the Web about the successful transplantation of this lens to the CPS with the APS-C frame format, which caused a desire to repeat this procedure and look at the world through the eye of the most common camera.

Features of adaptation and constructive T-43

As already mentioned - the T-43 is a fixed lens. But this does not mean that it cannot be removed . On the contrary, to disconnect the lens from the Smena-8M camera, you only need to unscrew the two long screws at the back (with the back cover open). But even in this form, the lens is not suitable for use, because does not have the usual attachment to the camera. The lens unit contains three parts: a central shutter (the most complex part, not needed for alteration), a focusing “nut” with a focus ring, a lens block with a diaphragm (combined with a focusing “screw”). 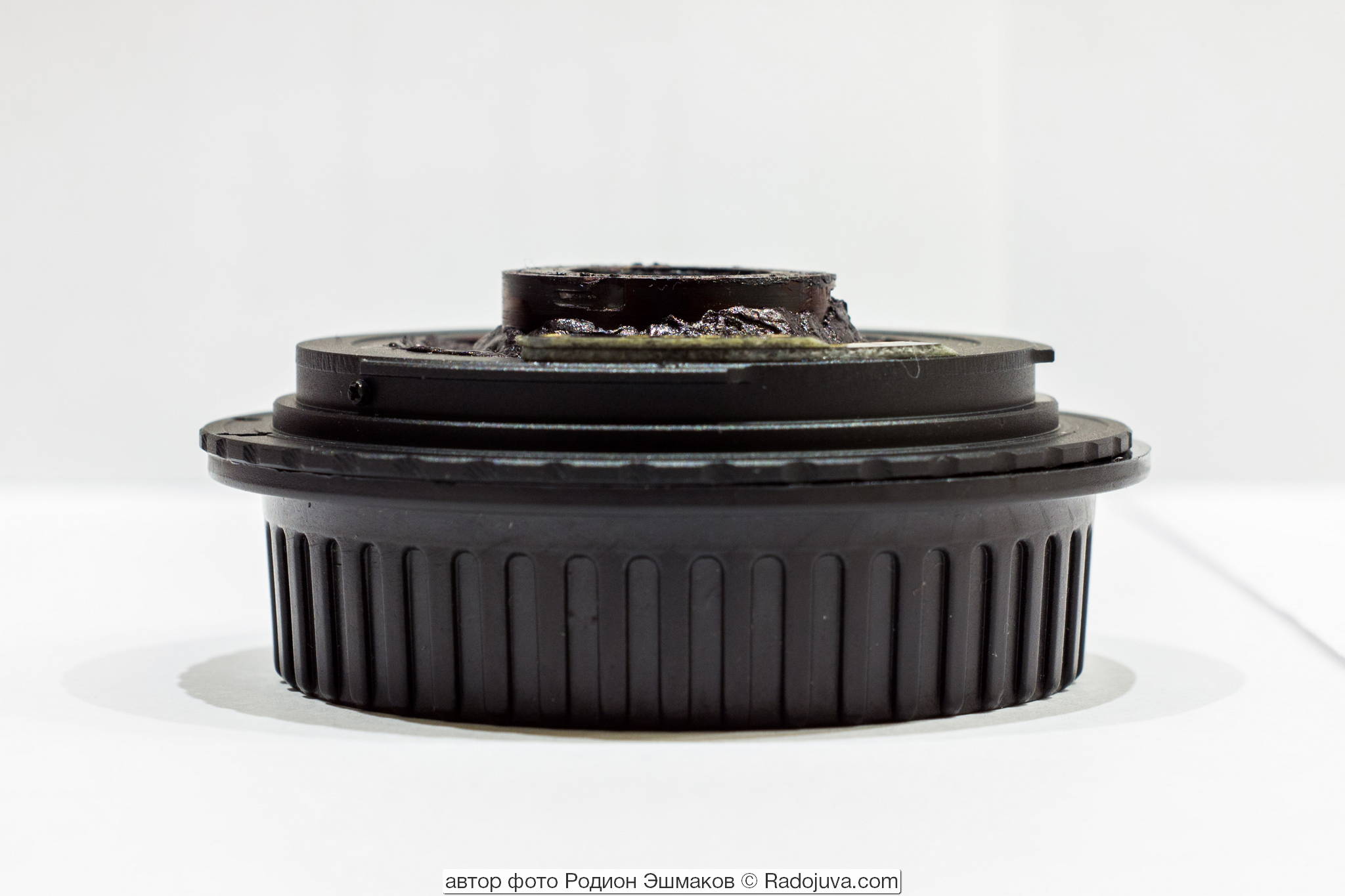 The protruding rear of the T-43, adapted to the EF mount

T-43 - a lens for mirrorless cameras, with a small working distance. Therefore, its use on the CZK is complicated by the need for a radical alteration of the housing with a deepening of the lens block inside the camera. In addition, the lens can only be mounted on cropped CZKs - a mirror will be touched on full-frame cameras. For the BZK, the alteration will be reduced only to removing the central shutter and changing the mount to a threaded type M39 or a bayonet fitting of the desired system.

Removing and twisting everything from the lens (be careful - the metal is thin and soft), we achieve the separation of the white aluminum focusing ring (it is the front part) and the central shutter unit. I do not recommend spoiling the look of the body parts - they can still come in handy. In the end, the lens unit should remain in the hands in a small helicoid with a wide flange. We put the focusing ring and the ring with aperture numbers (depth of field scale) aside - wait in the wings.

It is necessary to remove the protrusion around the circumference inside the "nut" of the helicoid in order to insert the lens block into it from the other side. We remove the extra fractions of a millimeter that interfere with the mirror when focusing on “infinity”. The helicoid lens block is installed in the shank with the desired mount so that infinity focusing is achieved.

Next, we remove the excess from the focus ring so that it can be mounted on the lens block recessed deep into the camera. We fix the ring with the depth of field scale so that it does not interfere with focusing (it will require revision with a file). We denote the mark on the focus ring (it is desirable to make it coincide with the long distance symbol on the focus ring), which corresponds to focusing at infinity and coincides with the triangular mark of the installed ring. The lens is ready! 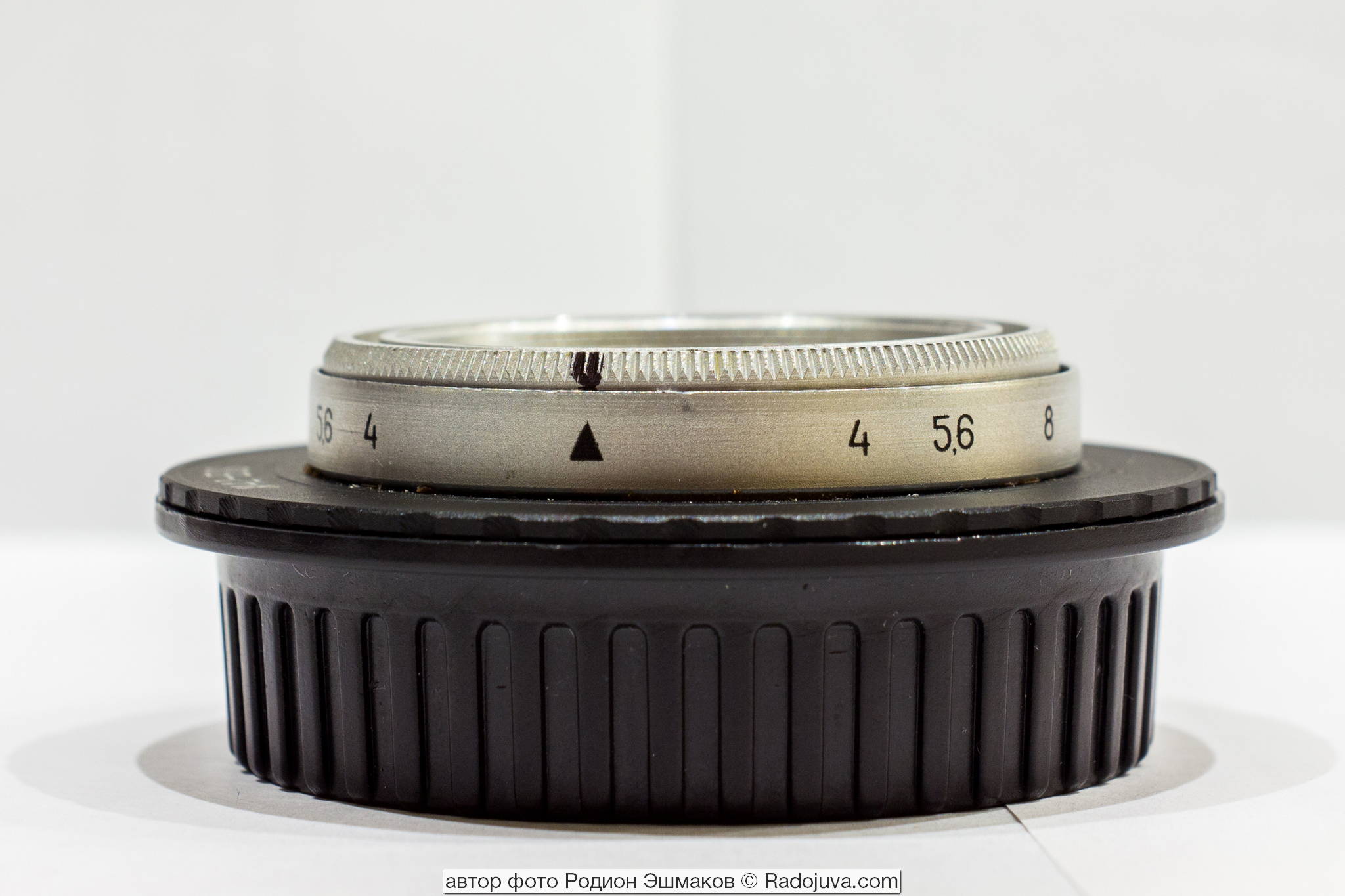 View of the adapted T-43 when focusing on infinity

After adapting the T-43 to SLR cameras, we get not just a pancake, but an ultrathin pancake: pay attention to how much the T-43 is smaller than the tiny Industar-69! 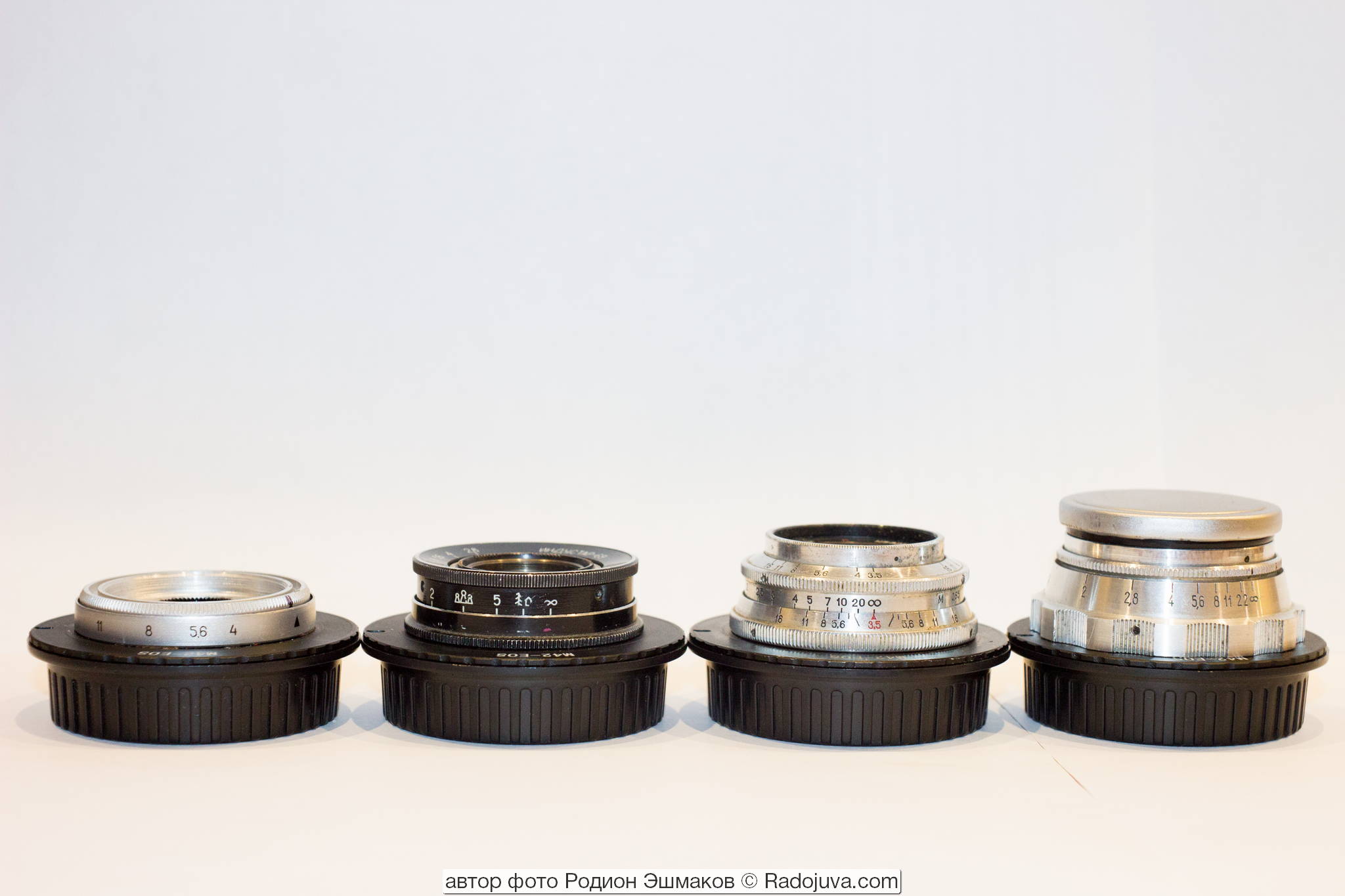 Despite the absence of stops, the lens can be used to safely drop the lens block - to completely unscrew it, you need to turn the focus ring as much as 2,5 turns. MDF can be taken ~ 0.5 m when unscrewed by 2 turns. An adapted I-26M rangefinder is also used in the same way. 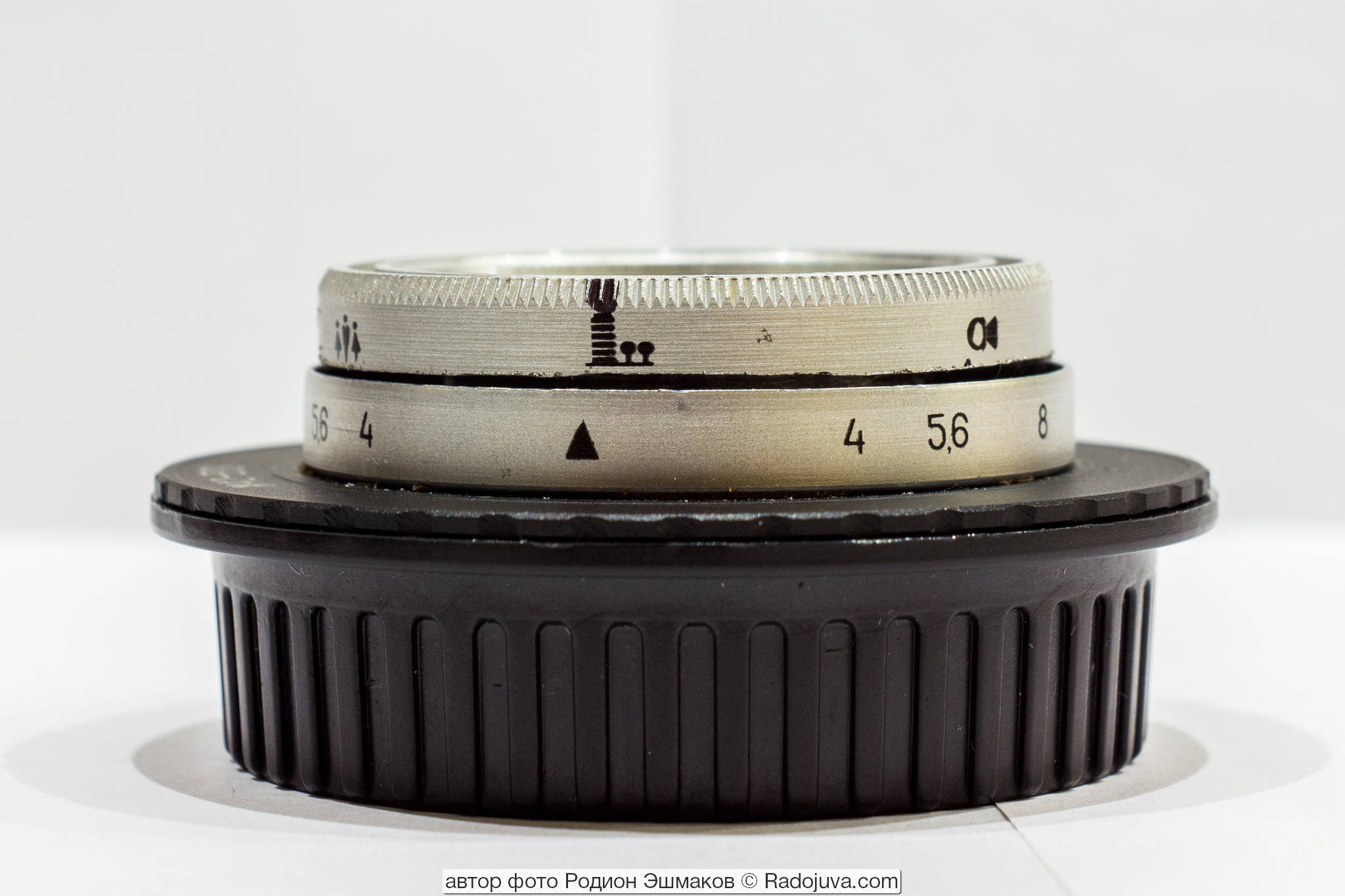 Aperture control is carried out in the same way as on an unadapted lens - a ring on the front side. The alteration did not touch her at all - the lens retained its authenticity, its “face”. It warms the soul. 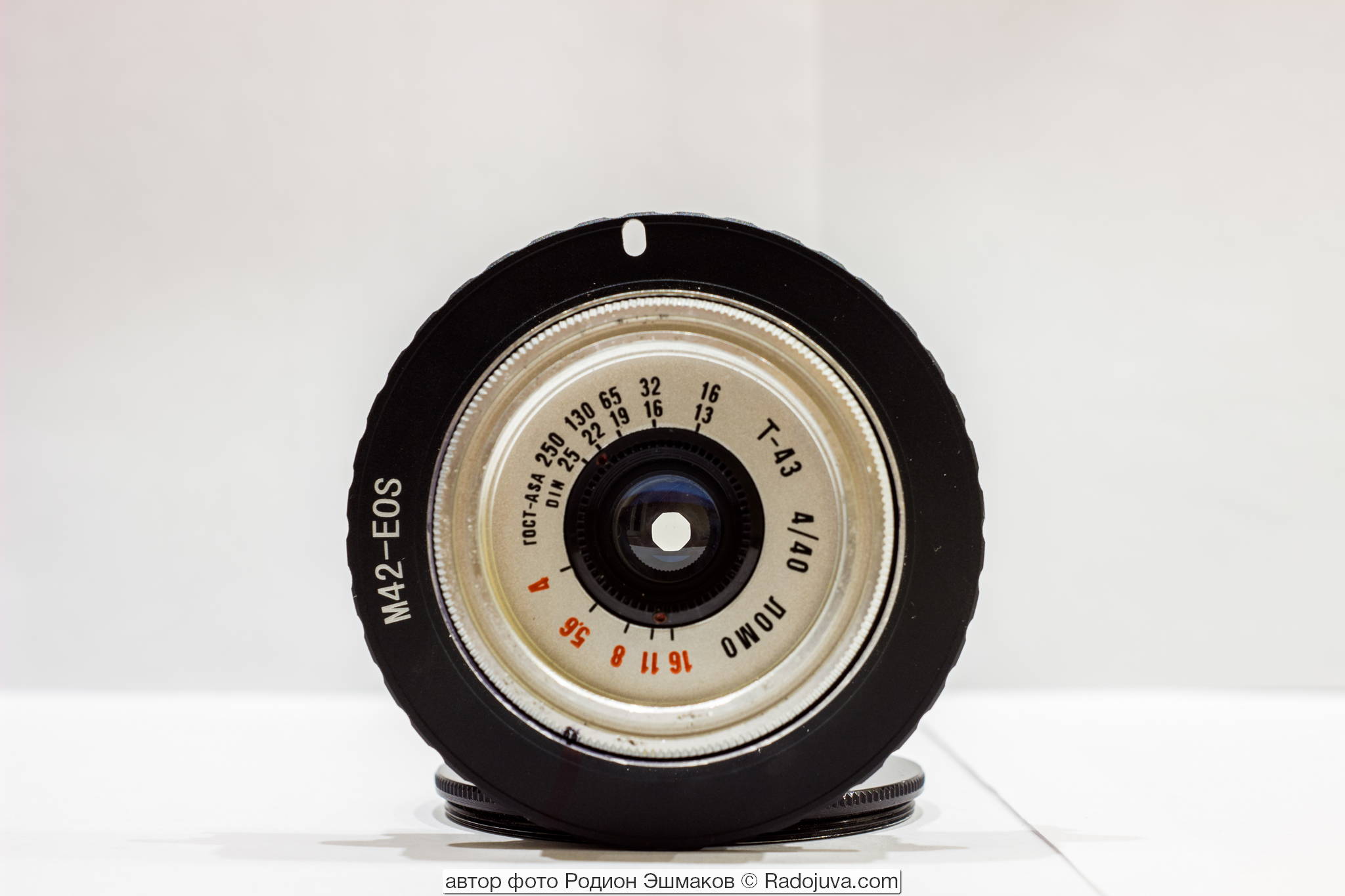 The lens diaphragm is surprisingly eight-petal. Typically, manufacturers of lenses for cheap cameras save by installing a five- or six-petal lens. You can not be afraid of nuts in the bokeh and wait for eight-ray stars from point sources of light. The aperture, although black, but not matted, can lead to a drop in contrast in difficult light conditions.

It should be noted that usually lenses made in the USSR need to blacken the chamfers of lenses. But at T-43 they are rolled and this operation will not work.

We emphasize that the T-43 is quite easy to disassemble and relatively easy to adapt (although more complicated than the I-61 rangefinder) for APS-C format SLR cameras and, especially, for mirrorless cameras. The strength of this lens lies in the simplicity of its device and manufacturability, which allowed it to become a regular for the most massive camera in the world.

T-43 - the simplest three-lens anastigmat with a mediocre aperture. It is distinguished by its short focal length - only 40 mm (in fact 42 mm), which makes it, one might say, standard on cameras from the APS-C format (EGF ~65 mm).

Small FR and low aperture (common for “pancake” is aperture order F / 2.8) allow you to achieve a large depth of field (which was important for the scale camera). Together with insignificant dimensions and a decent angle of field of view, this makes the lens attractive, especially for street photos. But is it possible to get a decent result with the simplest cheap triplet?

It turned out that at all apertures the lens is very sharp in the center of the frame. However, even at F / 11, it is not possible to achieve full sharpness across the APS-C frame, the corners pull the maximum for a rating of "satisfactory". At F / 4-F / 5.6, you can completely forget about the edges - the strongest coma, pronounced astigmatism completely blur the image in the corners, turning it into an indistinct mess up to F / 8. 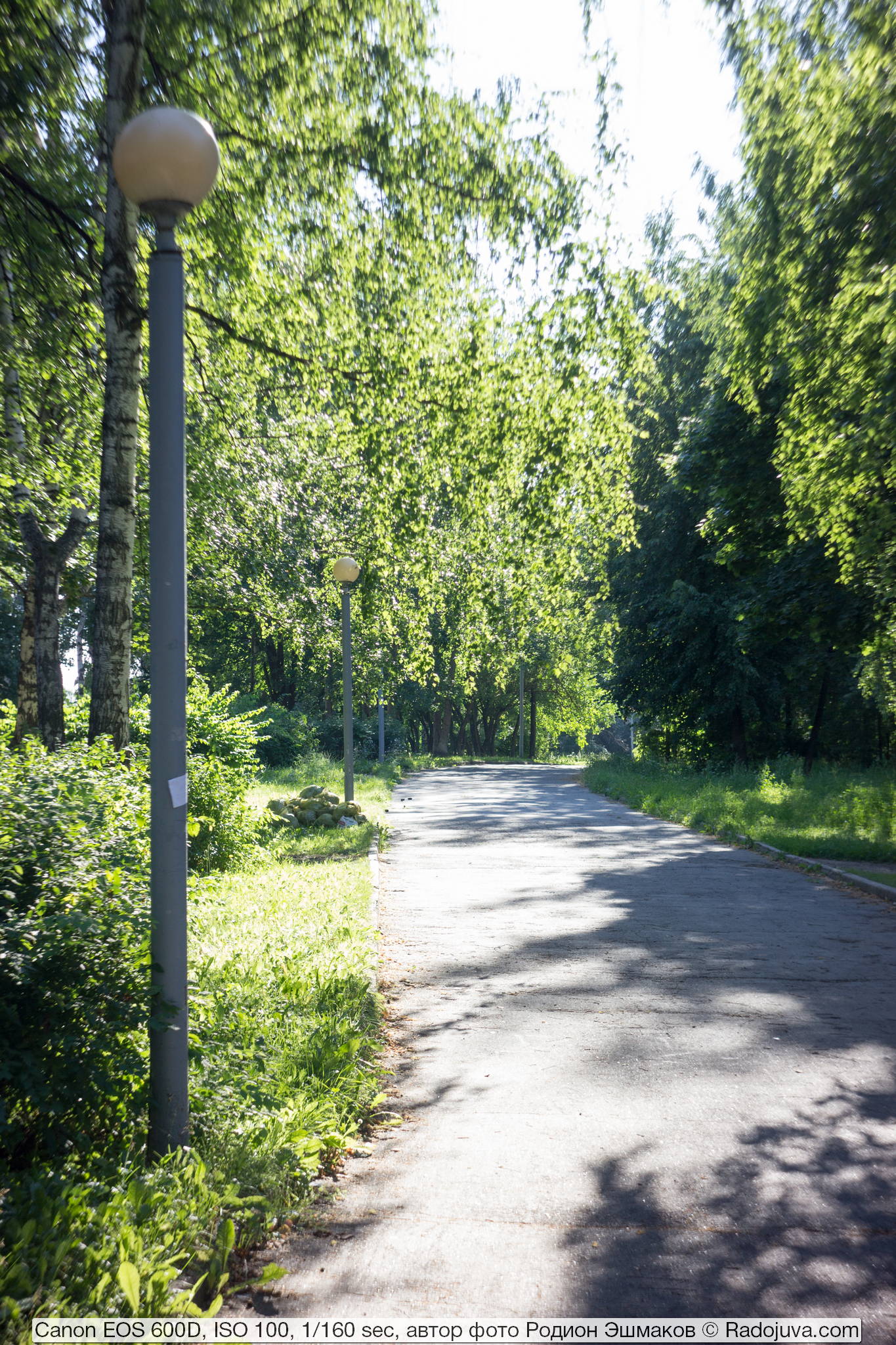 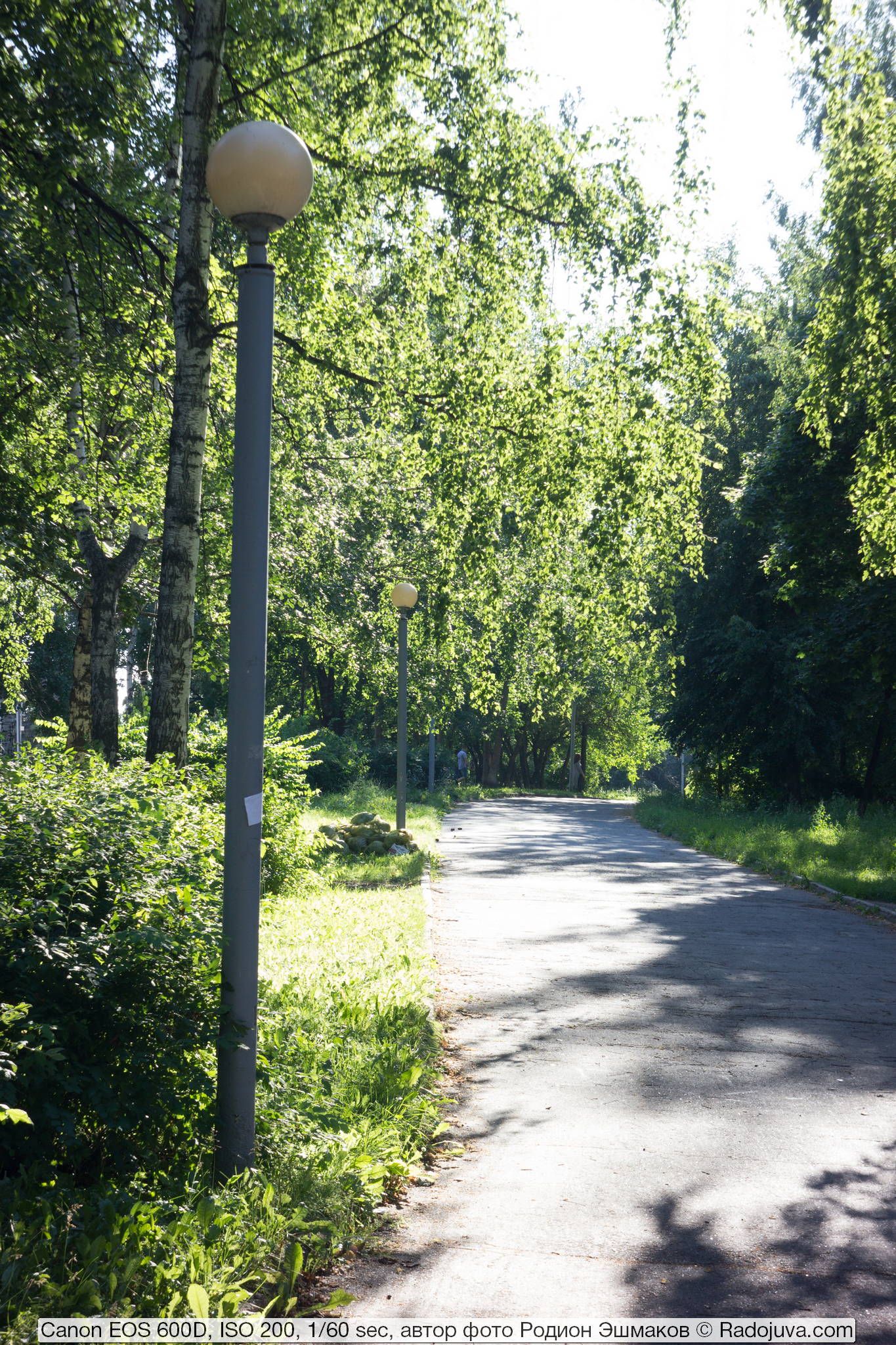 The best picture quality is achieved at F / 11, with a further decrease in the relative aperture, diffraction manifests itself, sharply worsening the image.

The contrast of the lens is satisfactory in soft light: it is only slightly reduced by “haze” and is easily corrected in the editor. In hard backlight, the lens tends to give “sunny rain” on the open aperture and a single bright flare (when the light source is close to the center of the frame), on the covered “rain” disappears. Also, in a hard light, a rather dense veil of the color of enlightenment is expressed - light blue. 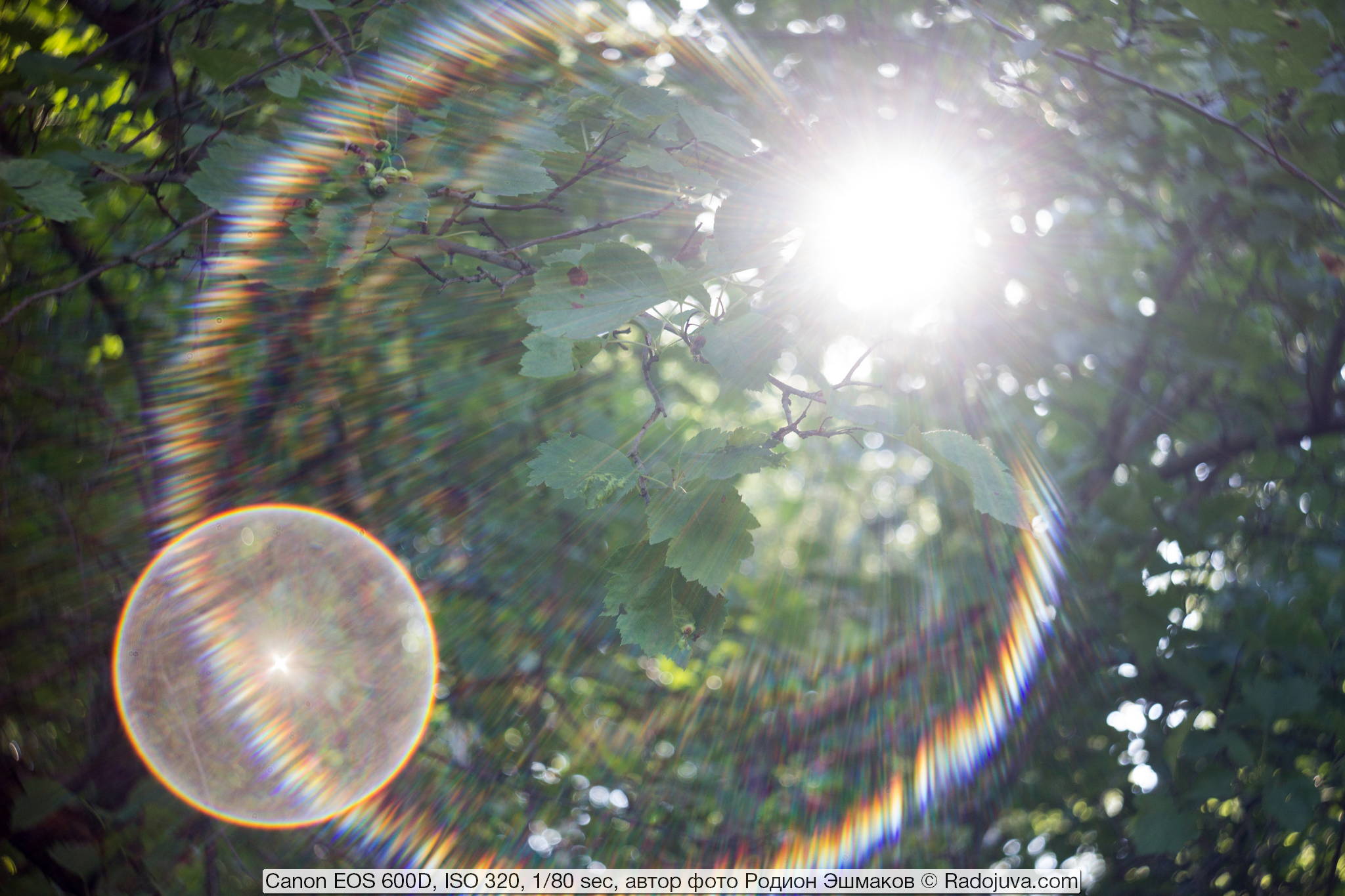 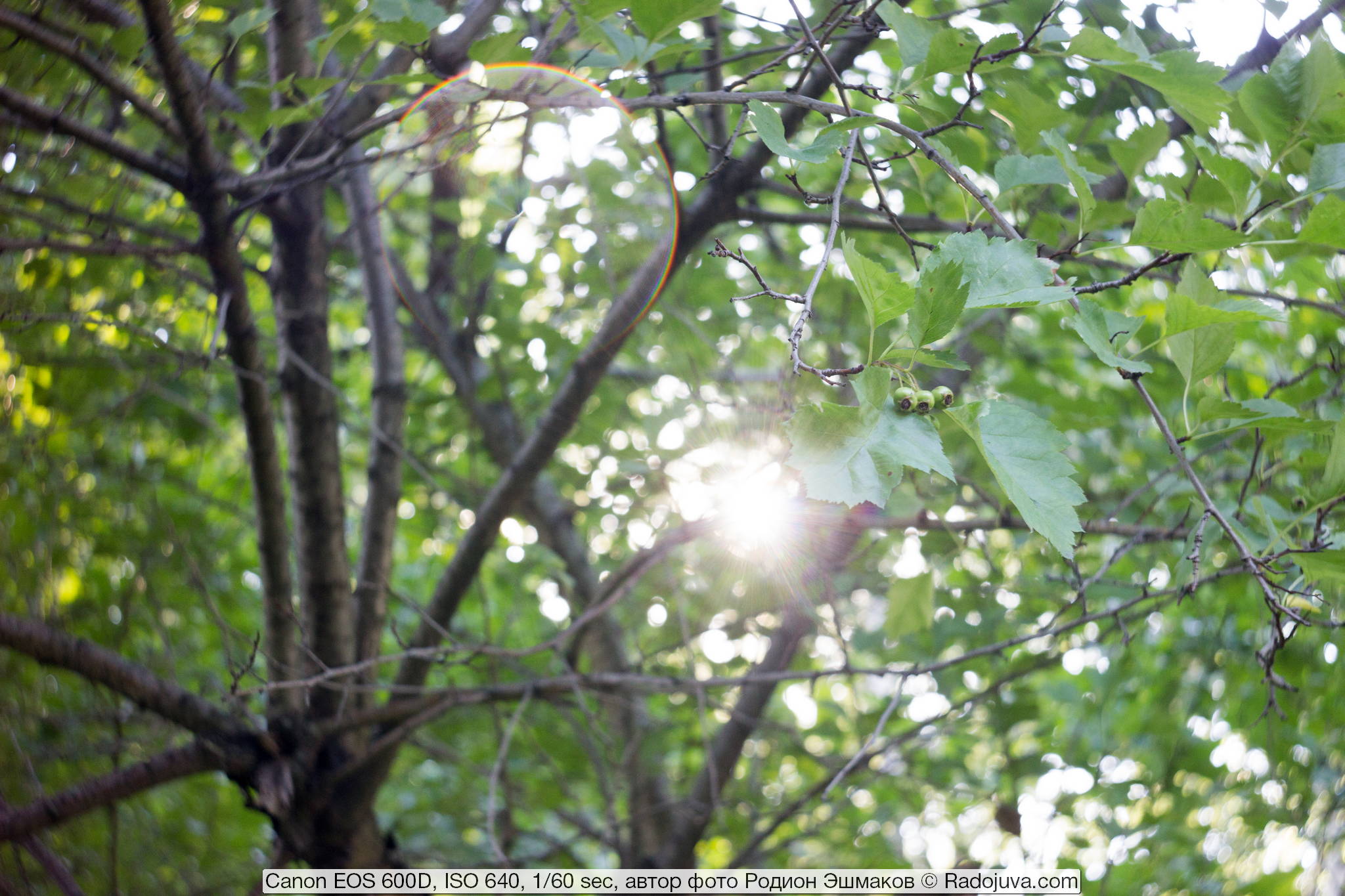 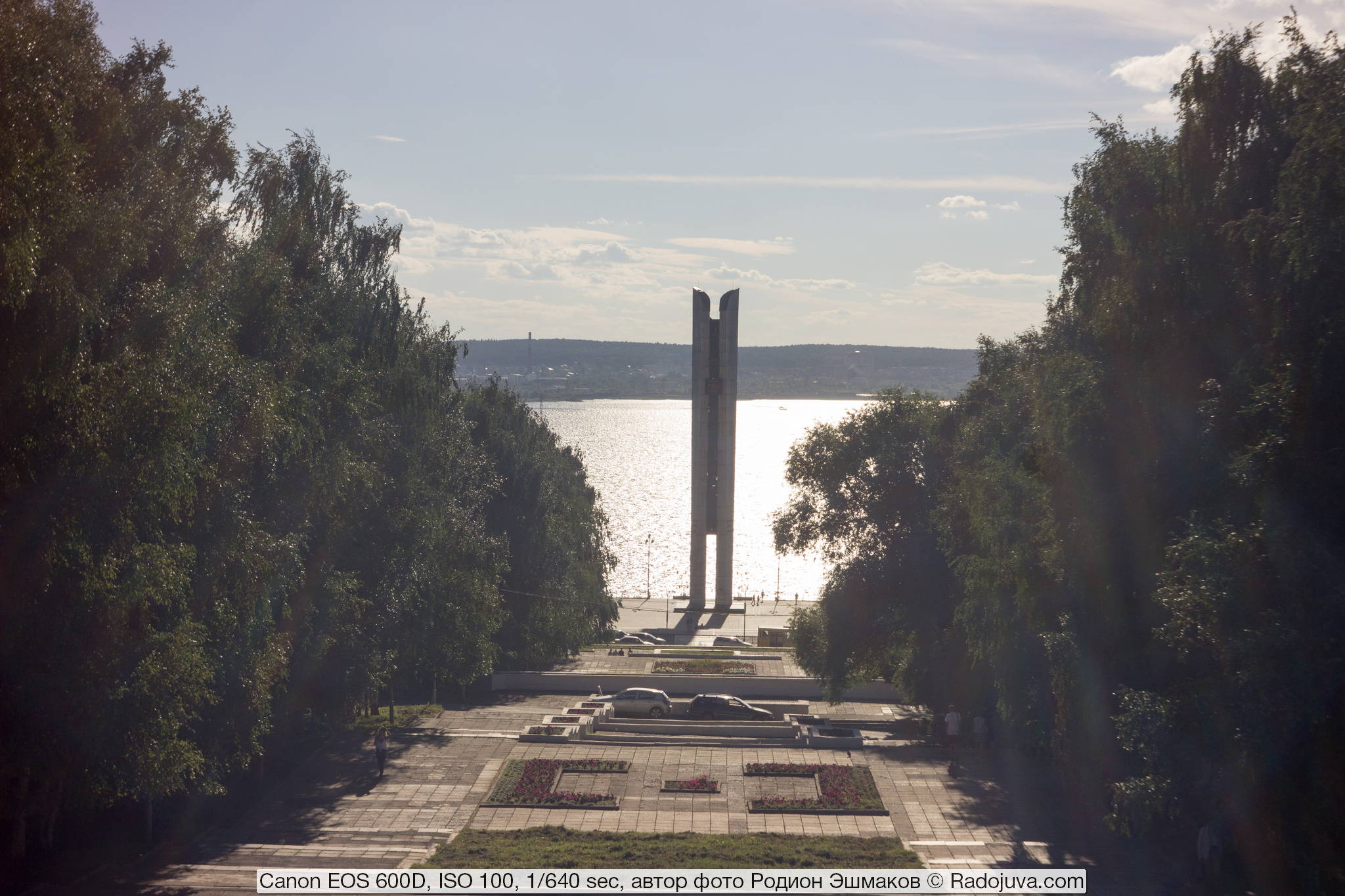 Veil in backlight (reflection from the water) at F / 11

Color reproduction is correct, slightly shifted to a warm area.

As for bokeh, it is difficult to obtain because of the small aperture, only at small focusing distances the blur becomes quite strong. It is tightly twisted due to vignetting and coma. Blur circles have a border. In terms of bokeh, the lens resembled the I-50 and I-69. 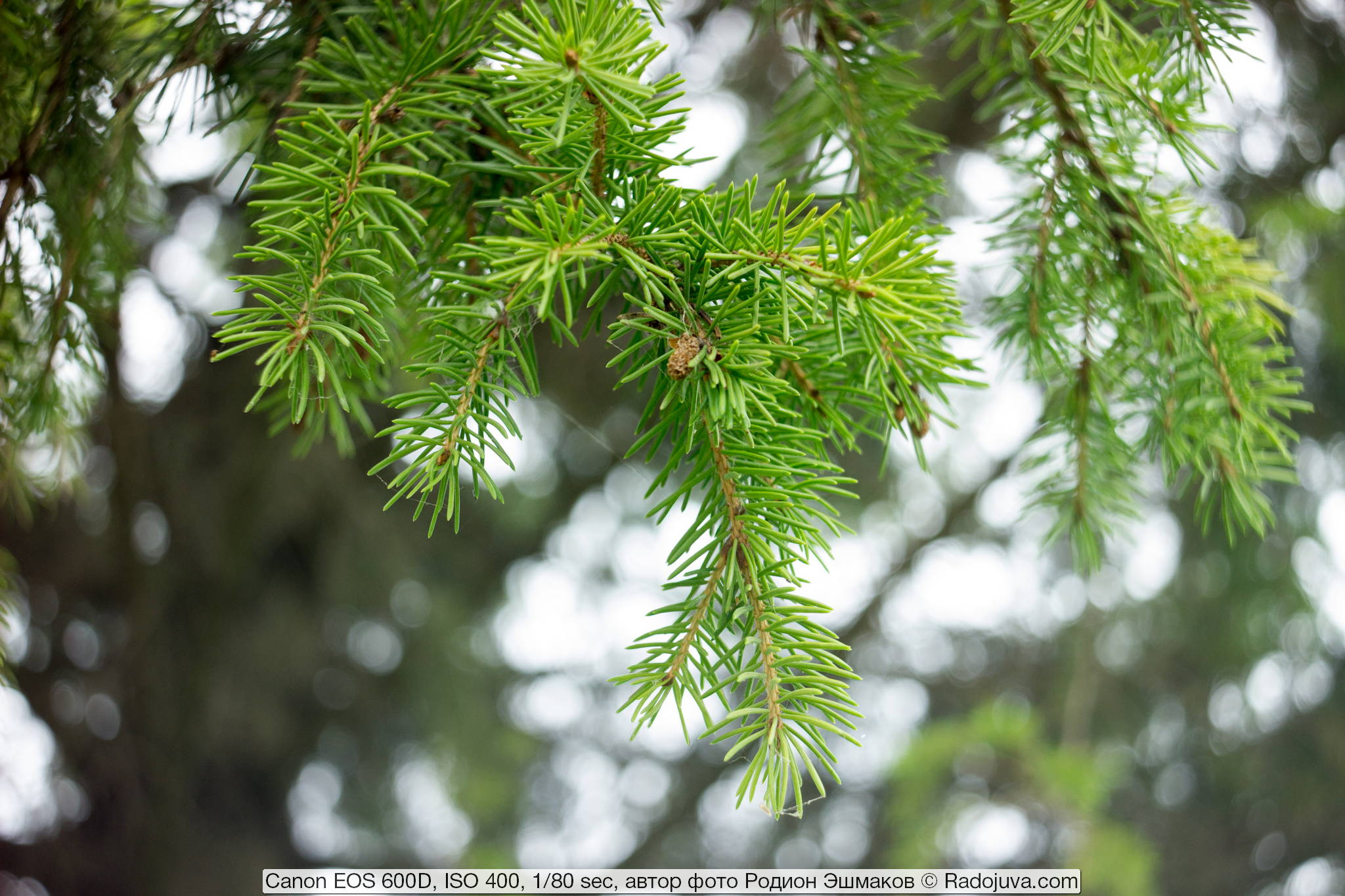 You can study the optical characteristics (sharpness in the center, field and contrast) of the T-43 40/4 in more detail and compare them with the Mir-1A 37 / 2.8 characteristics by reading this article.

The T-43 is a fun ultra-compact lens. It can serve as a photographing cover for the mount (everything is better than pinhole) or "original" and unusual staffer for street photography. Combines a good viewing angle and high sharpness in the center of the frame with negligible dimensions. Photos on the lens are obtained with a slight touch of aura of family albums from the USSR, filmed on "Changes" and "Viliya-Auto".

Thank you for your attention, Eshmakov Rodion.