According provided by Nikon DX AF-S Nikkor 55-200mm 1: 4-5.6GII ED VR II lens (version with parking button) is huge thanks to the store Fotika.com.uawhere you can find a huge number of different used photographic equipment, including similar lenses for Nikon cameras. 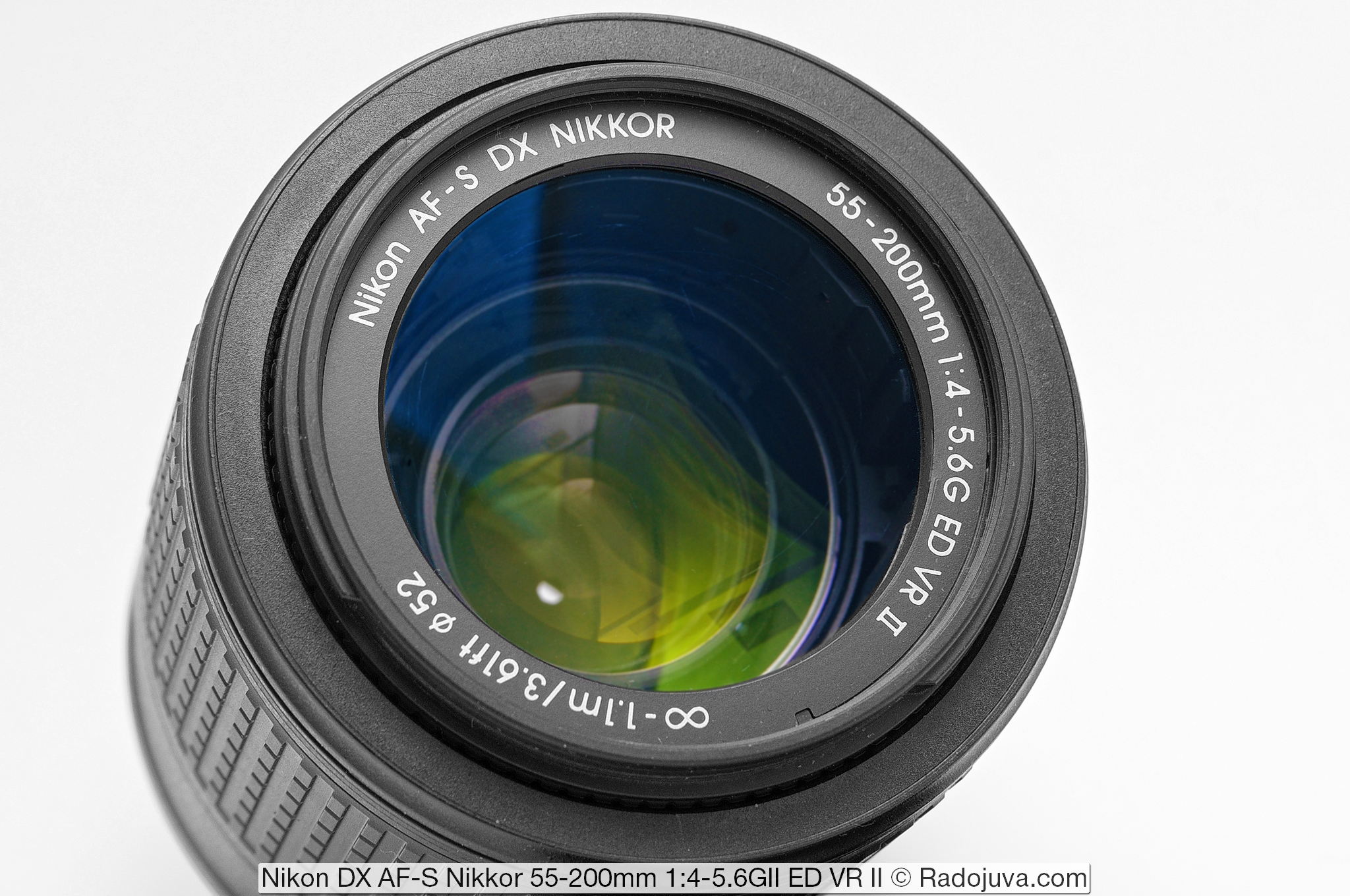 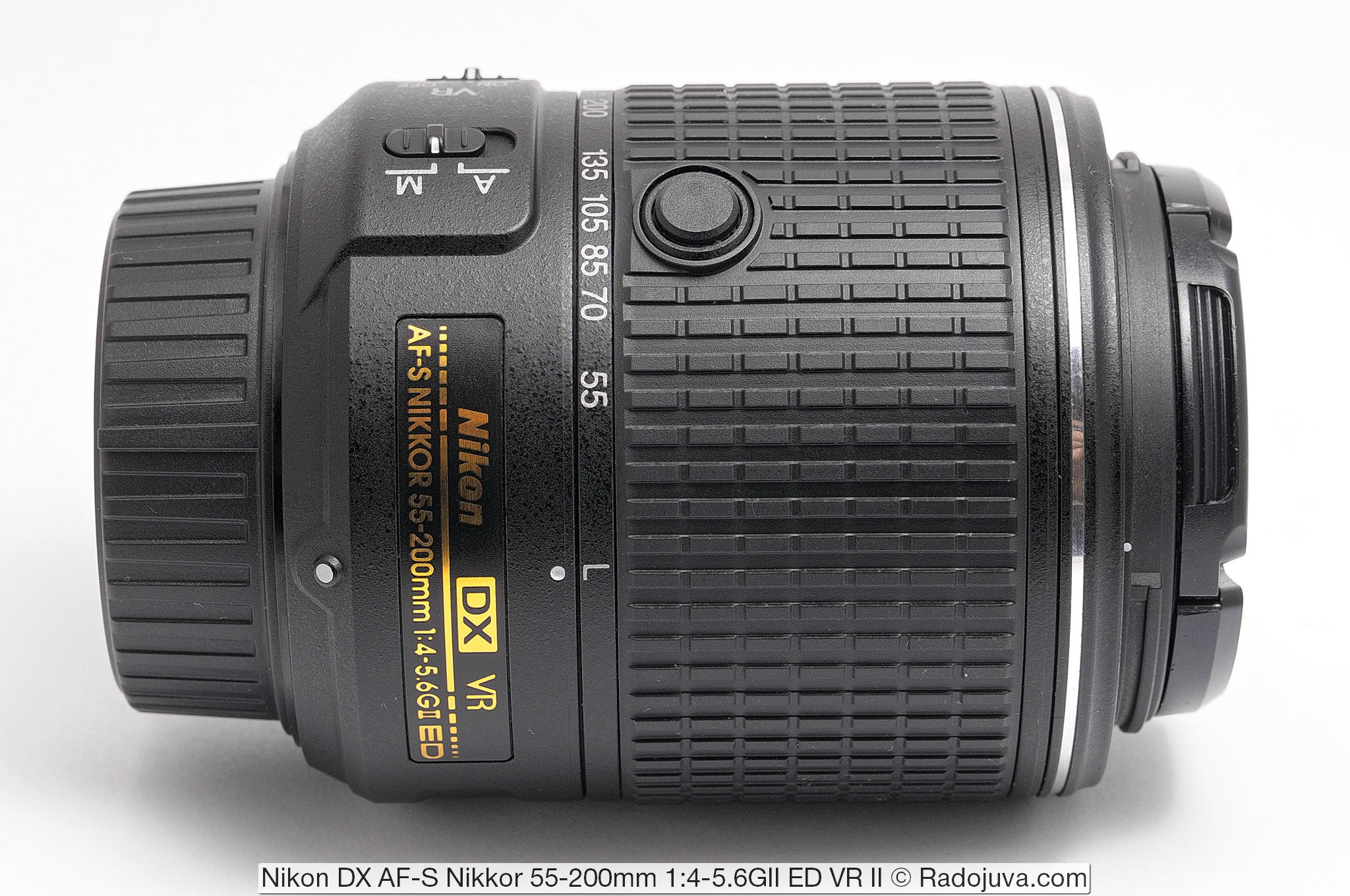 The Nikon 55-200 / 4-5.6GII VRII is an inexpensive telephoto lens for Nikon's DX-series crop cameras. Is a logical improvement on an older lens Nikon DX AF-S Nikkor 55-200mm 1: 4-5.6G ED VR IF SWM... Lightweight, compact enough for transportation (has a new lens parking system), with built-in image stabilization, and most importantly - with normal / good image quality (as for a lens of this class). It has good performance in terms of price / quality ratio. I'm not kidding - this is a really usable albeit 'dark / plastic' zoom telephoto. Of the serious shortcomings, only slow focusing, a drop in sharpness at 200 mm focal length and poor macro capabilities are striking.

Often such a lens can be purchased with the camera as one of the two lenses included in the so-called double kit. In this set, the total cost of the camera, Nikon 55-200 / 4-5.6GII VRII and Nikon 18-55 / 3.5-5.6GII VRII significantly lower than all three pieces of equipment purchased separately. 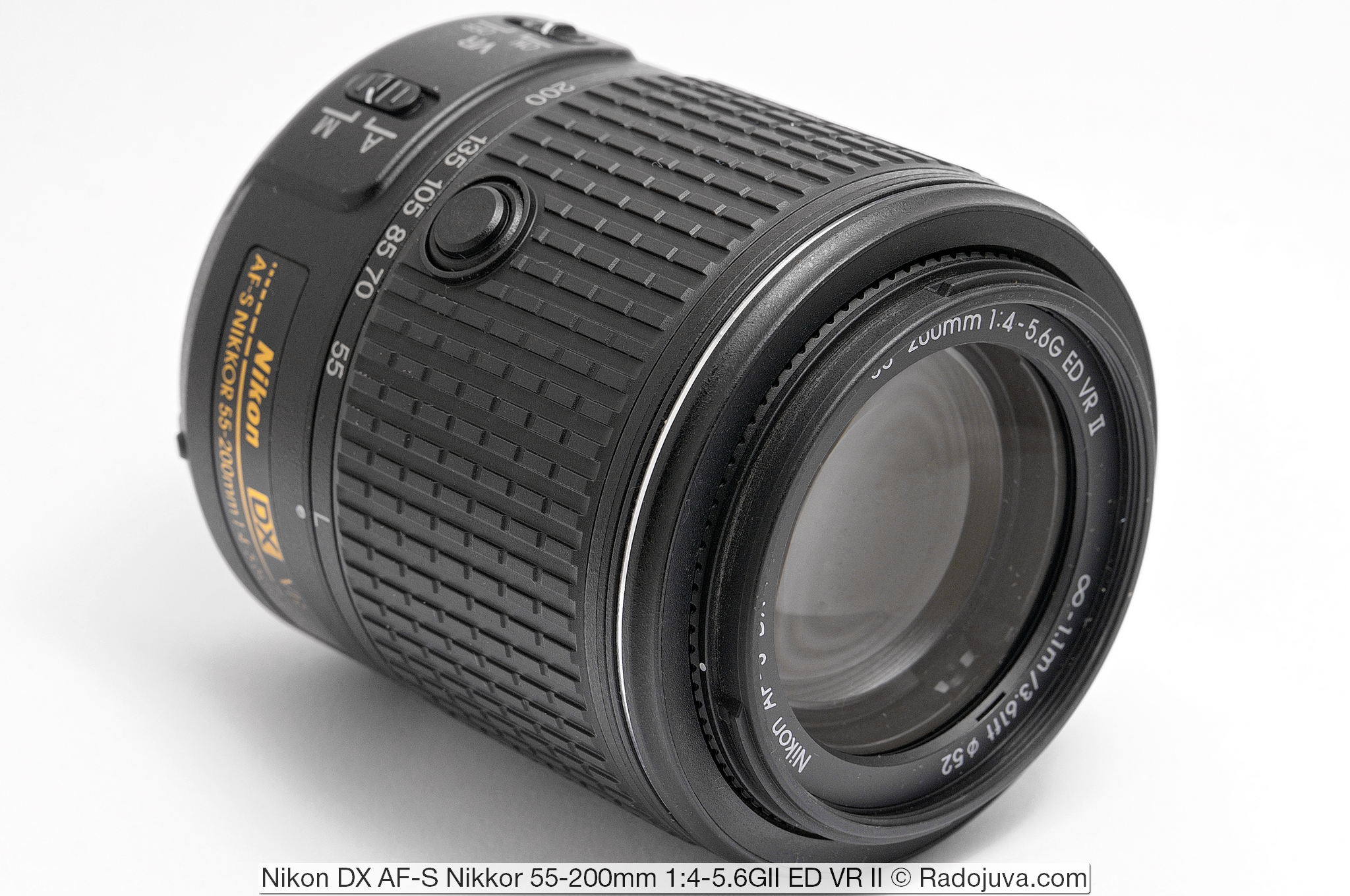 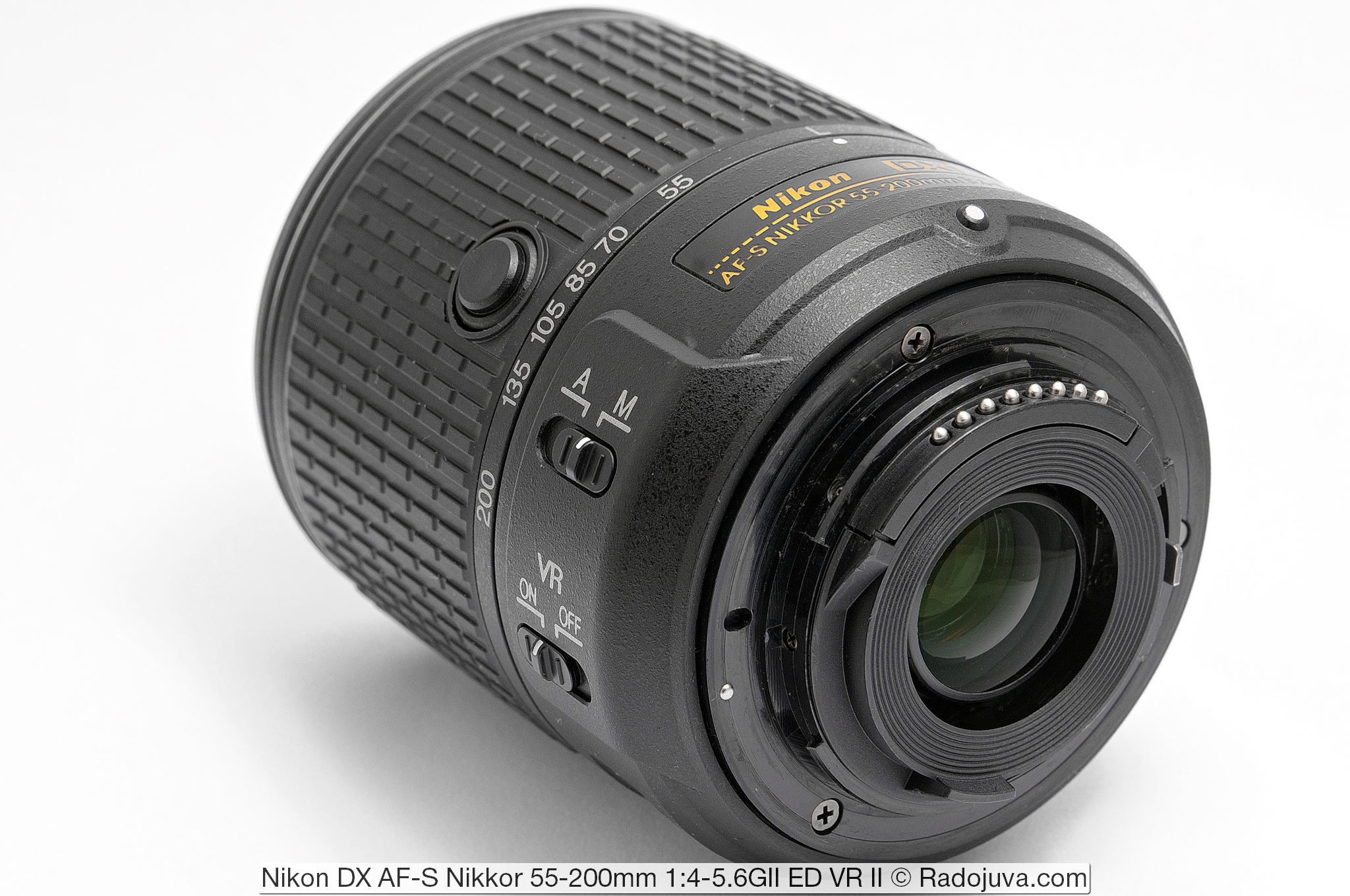 In the very first version Nikon DX AF-S Nikkor 55-200mm 1: 4-5.6G ED SWM used 2 low-dispersion elements in the optical scheme, in the next two versions - only one. 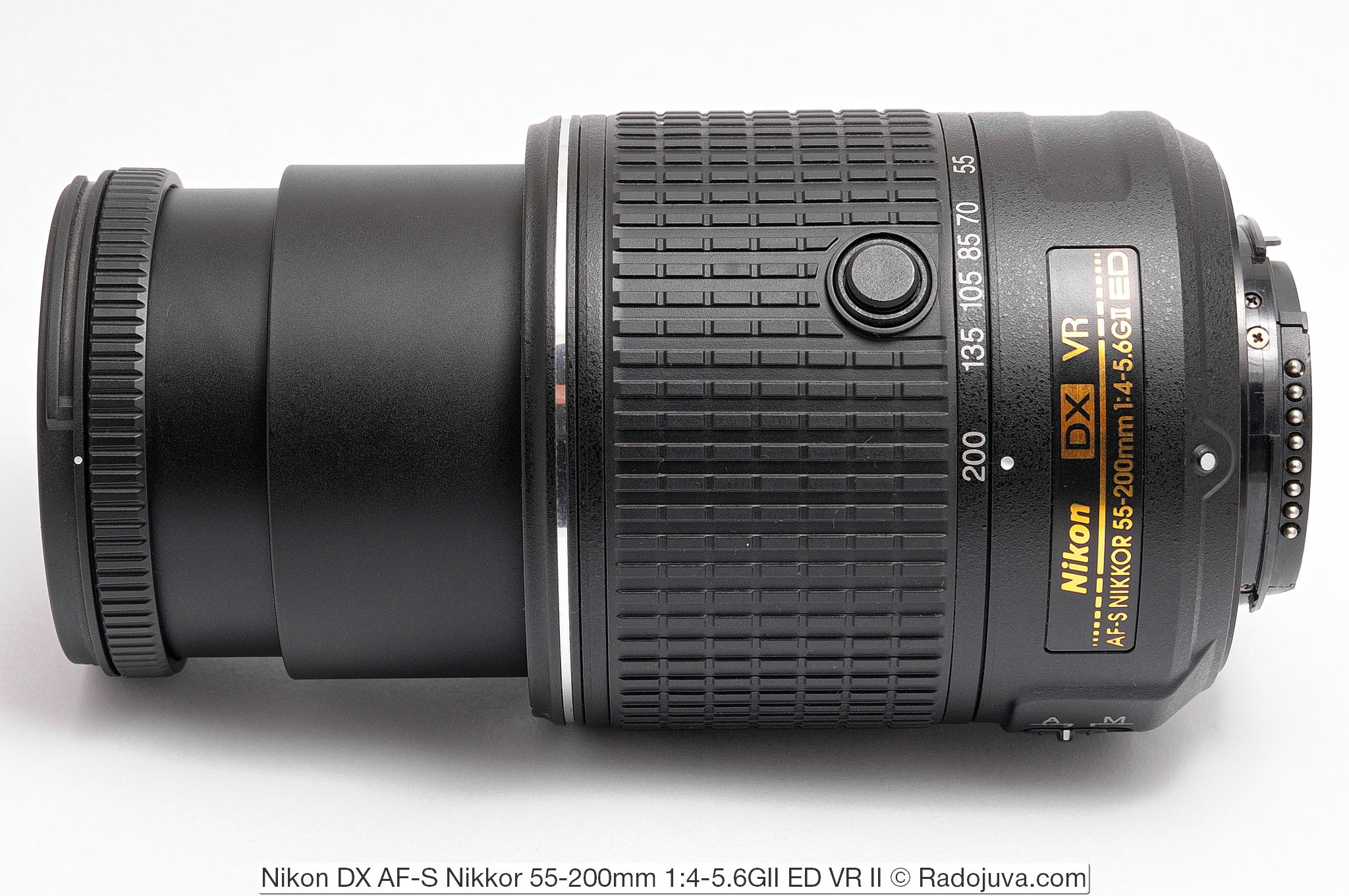 Nikon 55-200 / 4-5.6GII VRII assembled in Thailand. The lens uses a plastic lens mount (onfoto nakosyachili in their review), such a mount is the first sign that a user from the simplest Nikon Nikkor line of lenses is in front of the user.

The focus ring is plastic, without rubber inserts, the zoom ring is coated with rubber.

When changing the focal length, the rear lens moves in the middle of the lens body like a pump - it draws in and pushes out air. This behavior of the rear lens is called 'vacuum cleaner effect', which can increase the amount of dust that accumulates in the camera. From the side of the rear lens (when it is deepened), the lenses are visible loops, boards and other filling of the lens.

There is a bayonet mount mark and a mark on the case for quick installation of the hood. The lens uses a very strong (!) Plastic hood Nikon HB-37 (Made in China), which is fixed in special grooves located near the front lens of the lens. The hood can be installed in the opposite direction for transportation. In this position, access to the focus ring is lost. The lens hood moves with the trunk of the lens. 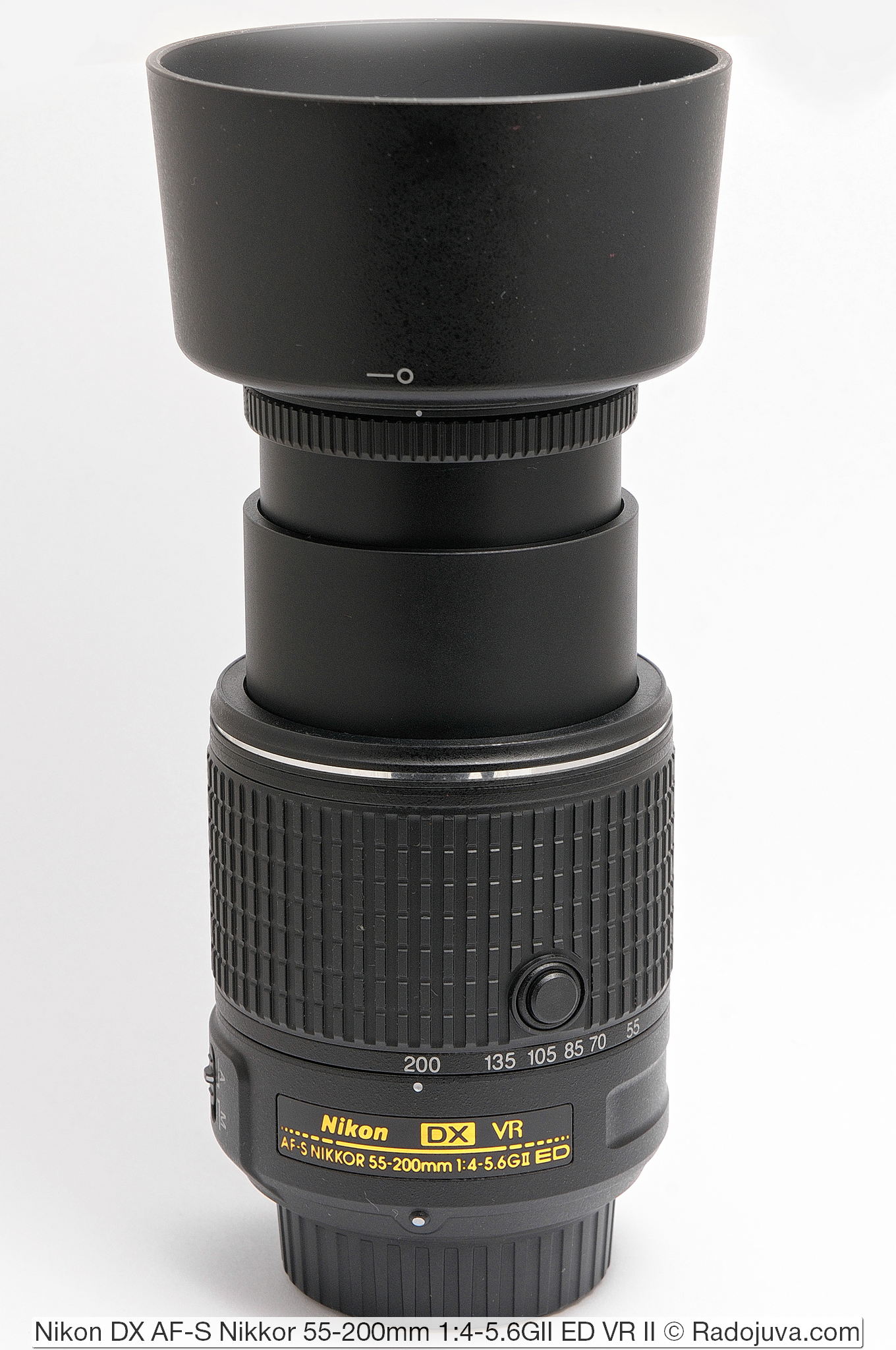 Nikon 55-200 / 4-5.6GII VRII has a second-generation Nikon VR image stabilizer that can compensate 4 stops by shutter speed. In values excerpts this means that you can shoot at shutter speeds 16 times longer than what a lens without a stabilizer requires.

Important: VR II (VRII) marking has nothing to do with the generation of the stabilizer. The 'II' prefix simply indicates the second version of this lens. Due to the fact that the abbreviation 'VR' is the last abbreviation of the full lens name shown near the front lens, there is a false impression that the prefix 'II' refers to the abbreviation 'VR'. The situation is further complicated by the fact that the lens, as evil, still uses a stabilizer of the second generation. At the time of this writing, the vast majority of Nikon lenses use a second generation stabilizer. The third generation could only be found in Nikon N AF-S Nikkor 70-200mm 1: 4G и Nikon AF-S Nikkor 70-200mm 1: 2.8E. The first generation can only be found in very old televisions, for example in Nikon ED AF VR-Nikkor 80-400mm 1: 4.5-5.6D.

To enable / disable the stabilizer on the lens there 'VR ON / OFF' button. I was able to take pictures without grease and hard work at 200 mm focal length and 1/15 of a second. Unlike more advanced lenses, such as Nikon DX AF-S Nikkor 16-85mm 1: 3.5-5.6G ED VR SWM IF Aspherical, this lens does not have the ability to switch stabilizer modes.

There may be some twitching in the viewfinder when turning the Image Stabilizer on and off, this is normal and should not be feared. The stabilizer is activated by pressing the focus activation button (usually half-pressing the shutter release button).

The stabilizer works well, but during real shooting it seems that the Nikon 55-200 / 4-5.6GII VRII stabilizer practically nothing in comparison with the previous version G vr (which also uses a second-generation stabilizer, but can only compensate according to the instructions for 3 steps shutter speed). 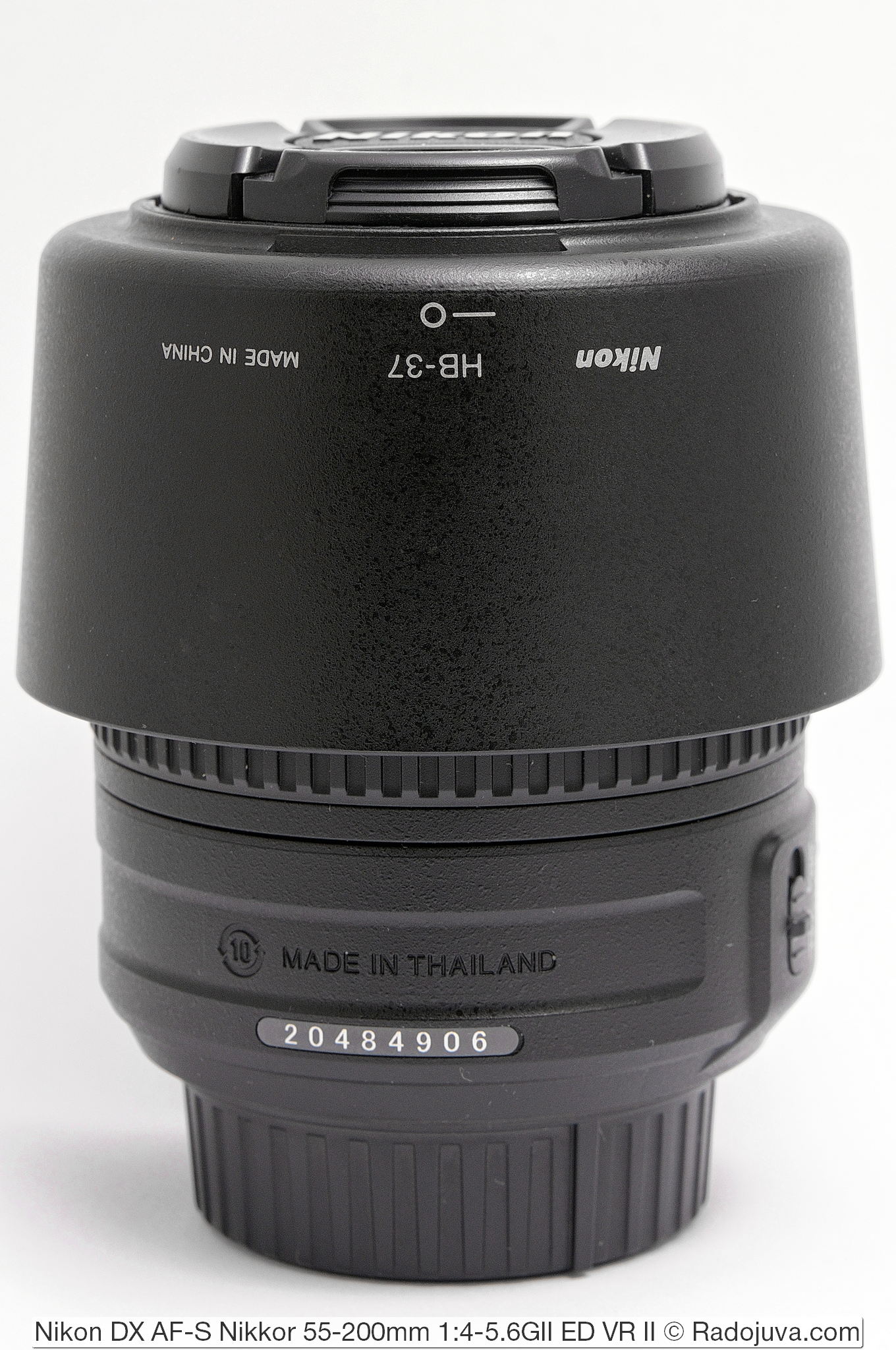 To start using the lens, you must first unlock it. To do this, you will have to press a special button that holds the lens in the 'L' position ('Locked' - 'Locked'), located on the zoom ring and rotate it toward the 55 mm mark, after which a slight click will be heard. To fold the lens, just press the button in exactly the same way and turn the zoom (zoom) ring in the opposite direction. When folded, the lens is shorter than in the working one.

On camera Nikon D80, D90, D700 and, most likely, on many other old cameras, when folded, the camera “does not see” the lens, but in the value field aperture 'F—' error blinks. Also, when folded, nothing is visible in the viewfinder.

On camera Nikon D3400, and most likely, on many other modern cameras, when the lens is folded, the camera displays the message "Before you start taking pictures, rotate the zoom ring to lengthen the lens." 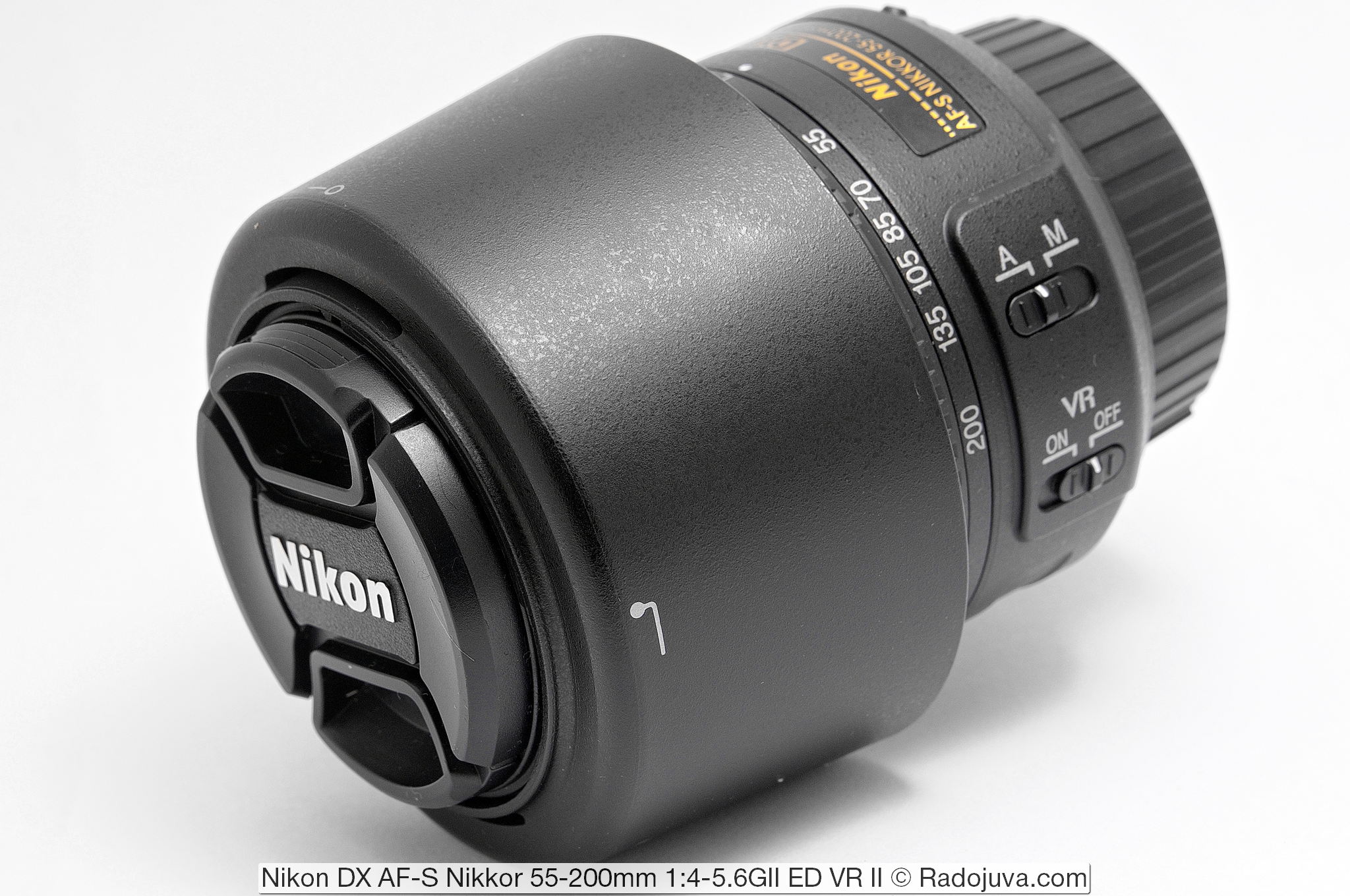 Important: this lens will automatically focus on all Nikon DSLR cameras.

Despite claims that the focus motor is silent, noise is present during actual operation. This noise will affect the sound quality during movie shooting using the microphone built into the camera.

On the lens housing you can find focus switch 'A - M'. In position 'A', auto focus works, and in position 'M' - manual focus. During auto focus, the focus ring rotates and cannot be touched. To perform manual focusing, the lens must be switched to 'M' mode. The lens does not have a constantly manual focus control mode M / A or A / m.

The focus ring is paired with the front retractable body frame. During focusing, the front and rear lenses remain stationary, as the lens uses internal focus. You can easily use any filters, for example polarizing or gradient. The focus ring rotates approximately 60 degrees. When extreme positions are reached, the focus ring abuts. The ring is narrow, not rubberized and quite uncomfortable.

When used on a camera Nikon D90 (with unpretentious Multi-CAM 1000 focusing system) the lens behaves well, rarely focuses incorrectly. I had no problems with focus accuracy and focus. On camera Nikon D90 I checked the presence of the back and focus front at different focusing distances and different values ​​of the focal length (infinity and MDF as well). Pictures taken using the Live View mode (which does not suffer from back / front focus) were used as a measure. Focusing accuracy using the central cross-shaped phase sensor completely coincided with the Live View mode.

The minimum focusing distance is 110 cm (the distance from the sensor / focal plane of the camera to the subject). With such an MDF, the maximum magnification factor is 1: 4.35 (you can shoot a weak macro). 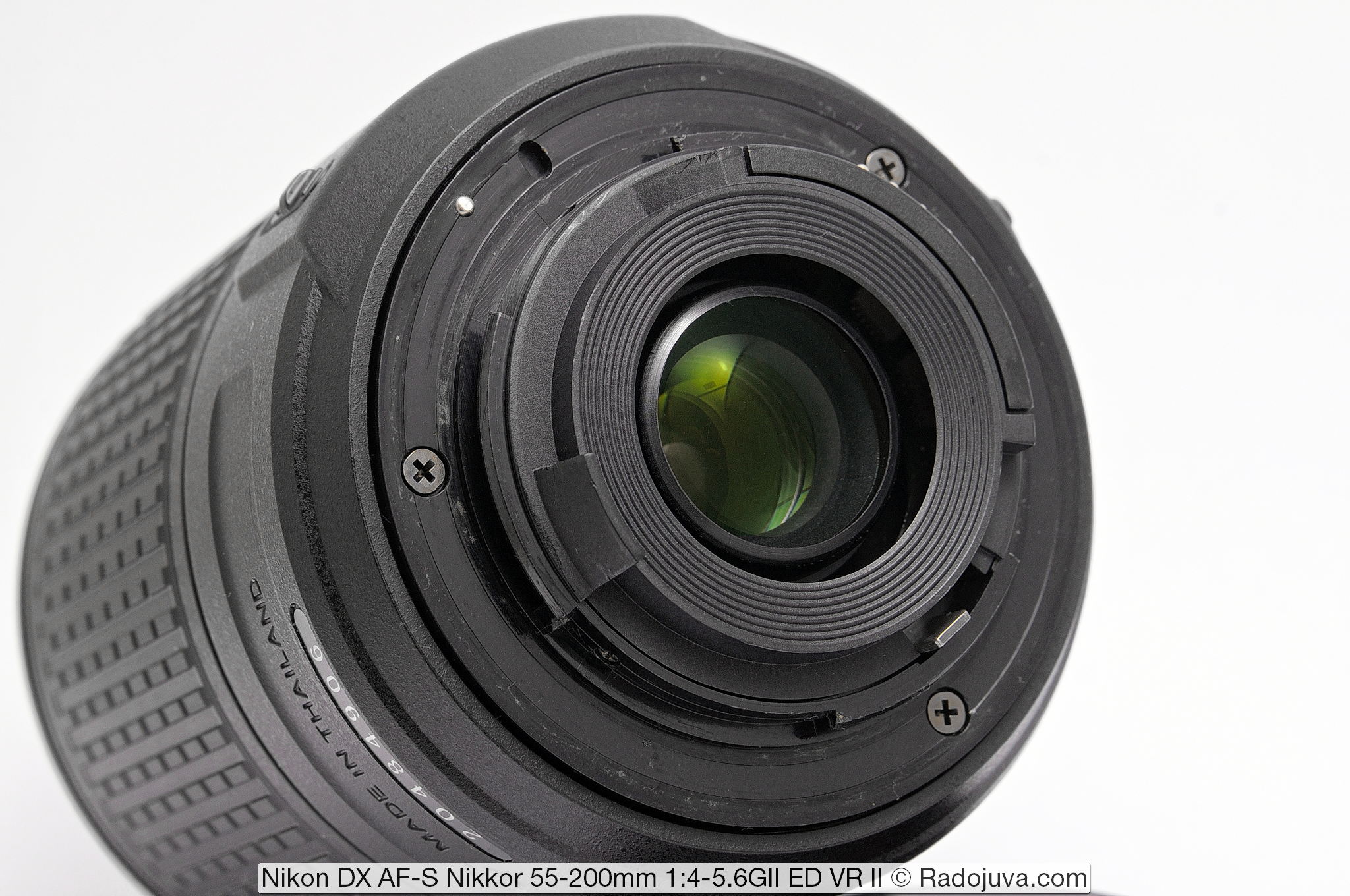 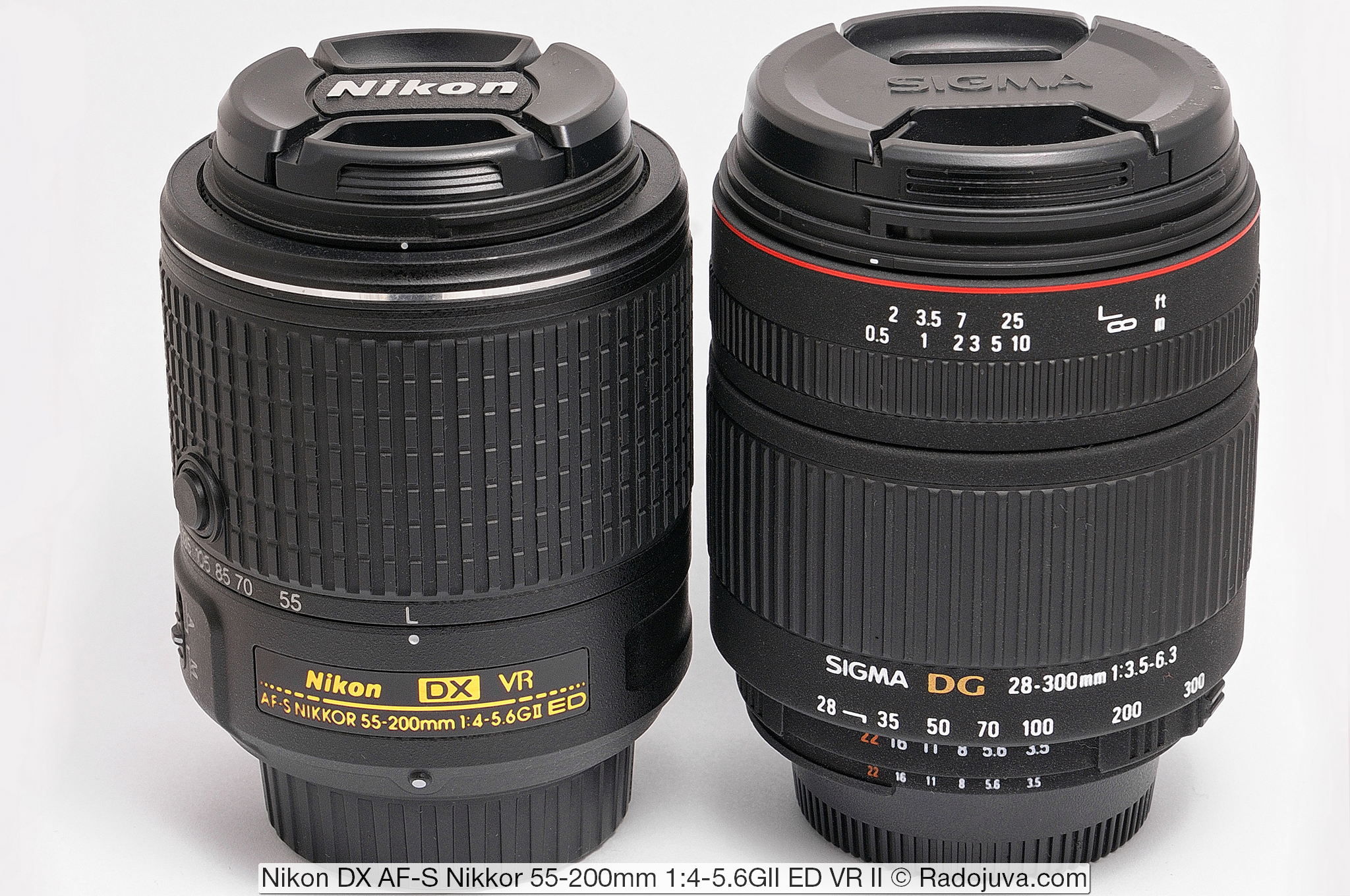 Chromatic aberrationsVignetting and distortion are present, but their level is negligible.

In the blur zone, you get even circles of blur due to the rounded diaphragm.

The lens, for both dark and budget televisions, shows good performance in terms of image quality. 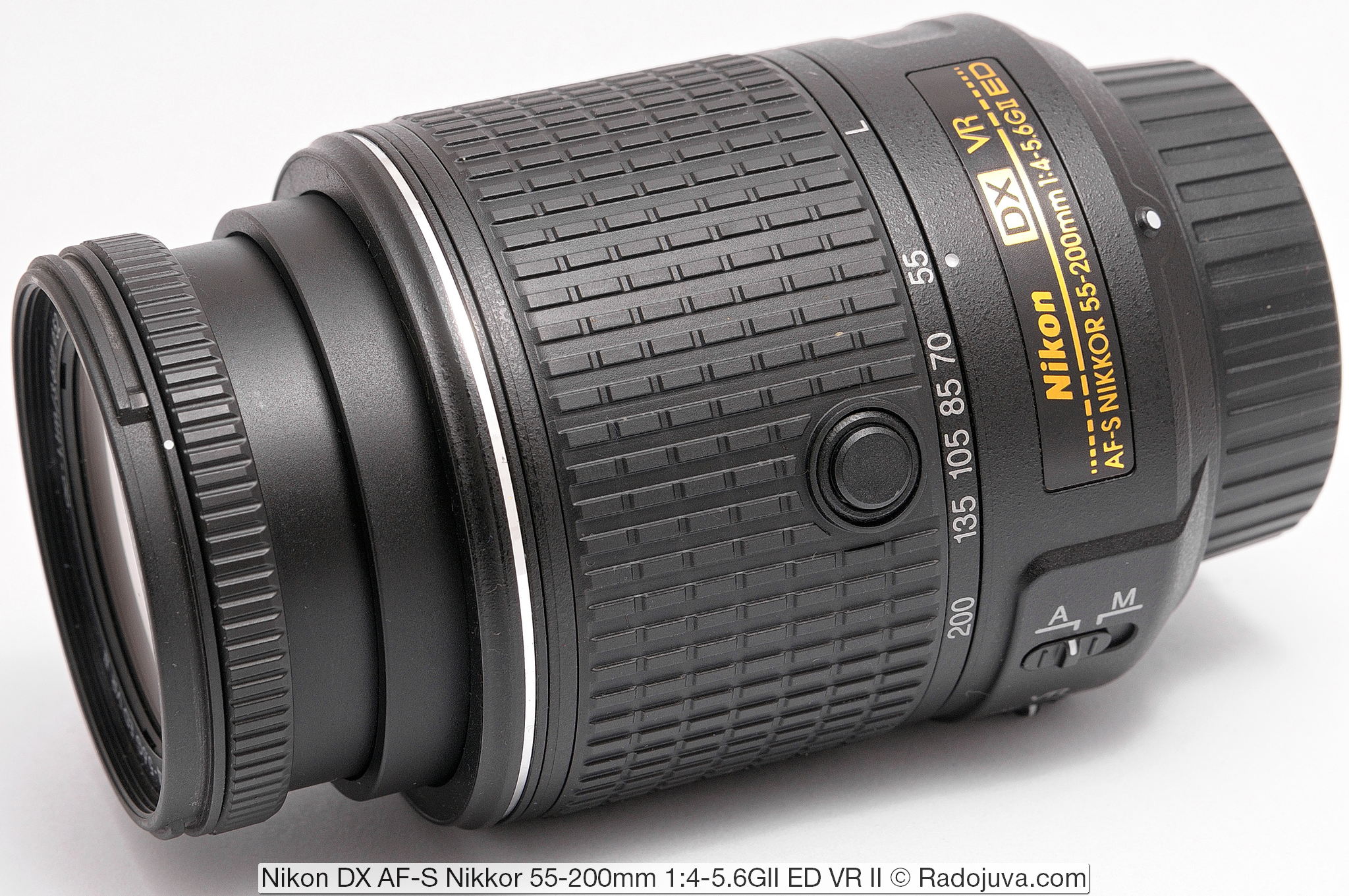 Pictures from Nikon D90. The photos in the gallery below are shown without processing, the conversion of the source RAW files by the original Nikon ViewNX-i utility without making additional adjustments. 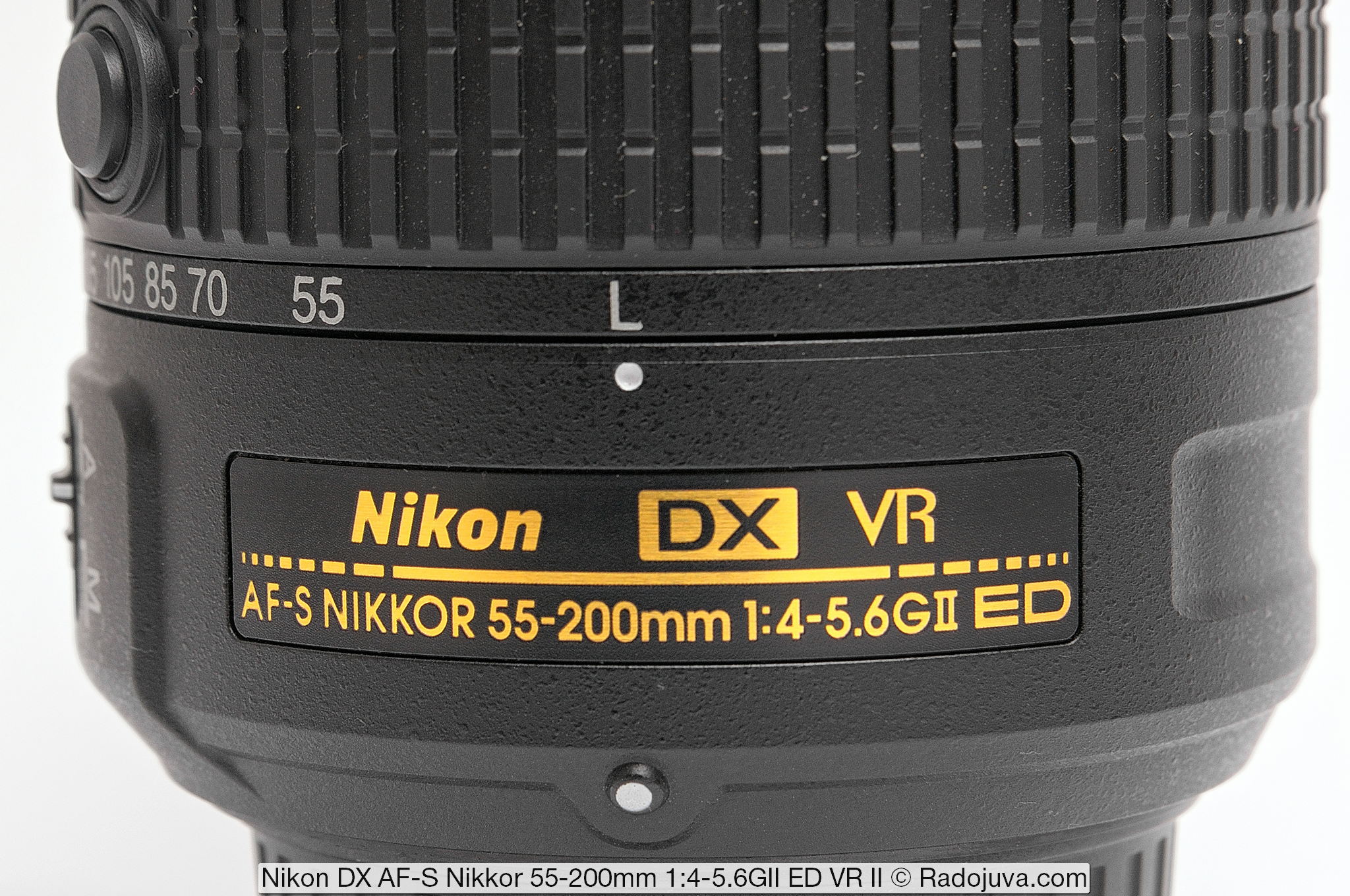 A list of absolutely all lenses of the Nikon DX series, as well as a lot of useful information on lenses and cameras Nikon will find here. 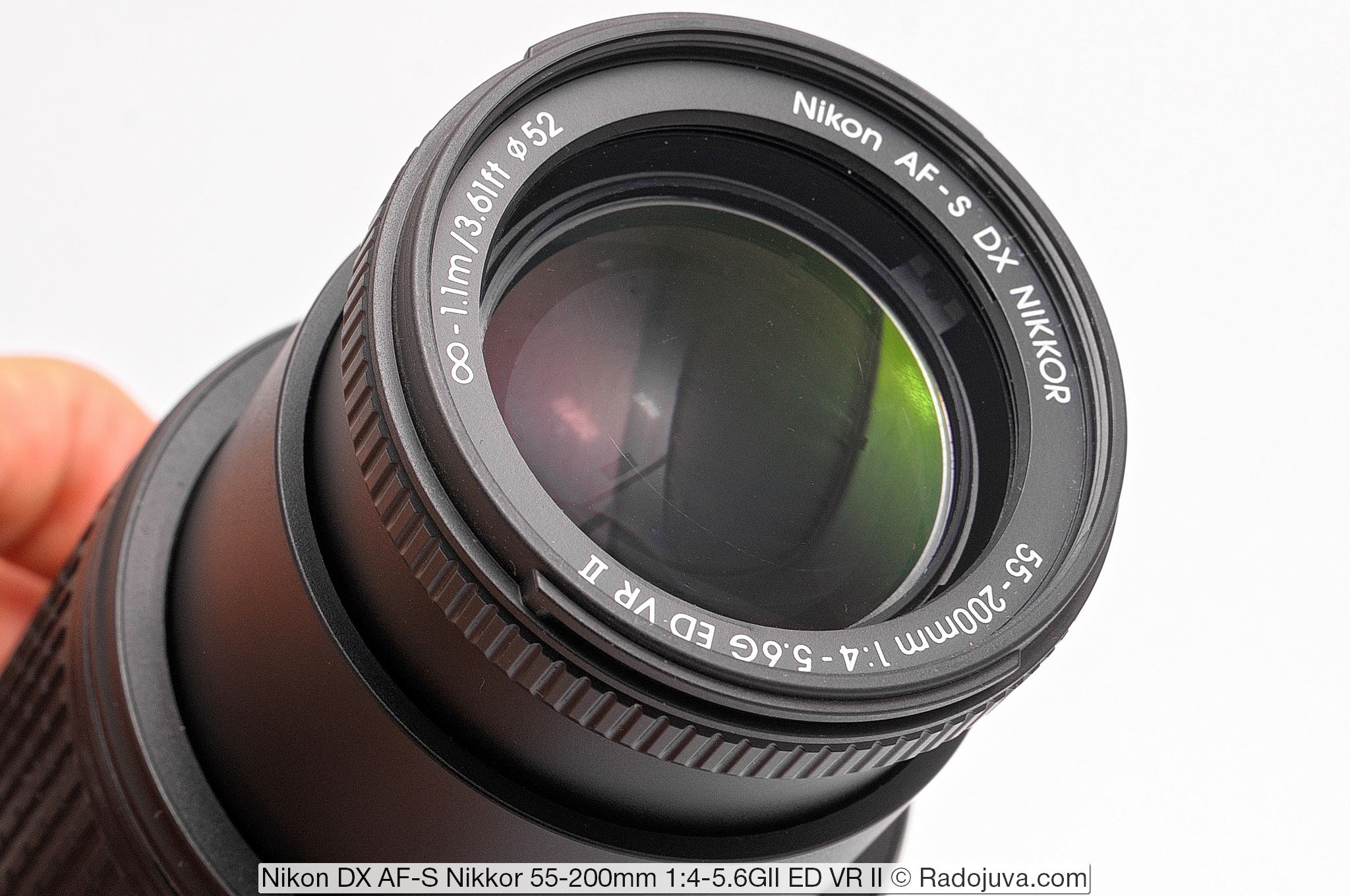 GII VR II is an expected update from the previous version. We have increased the resolution to work with 24 MP cameras, improved the gimbal, made a parking system and reduced weight. In general, everything is better (except for focusing speed). The GII VR II is a great inexpensive way to shoot telephoto shots.

My thoughts for those who are rushing about choosing: 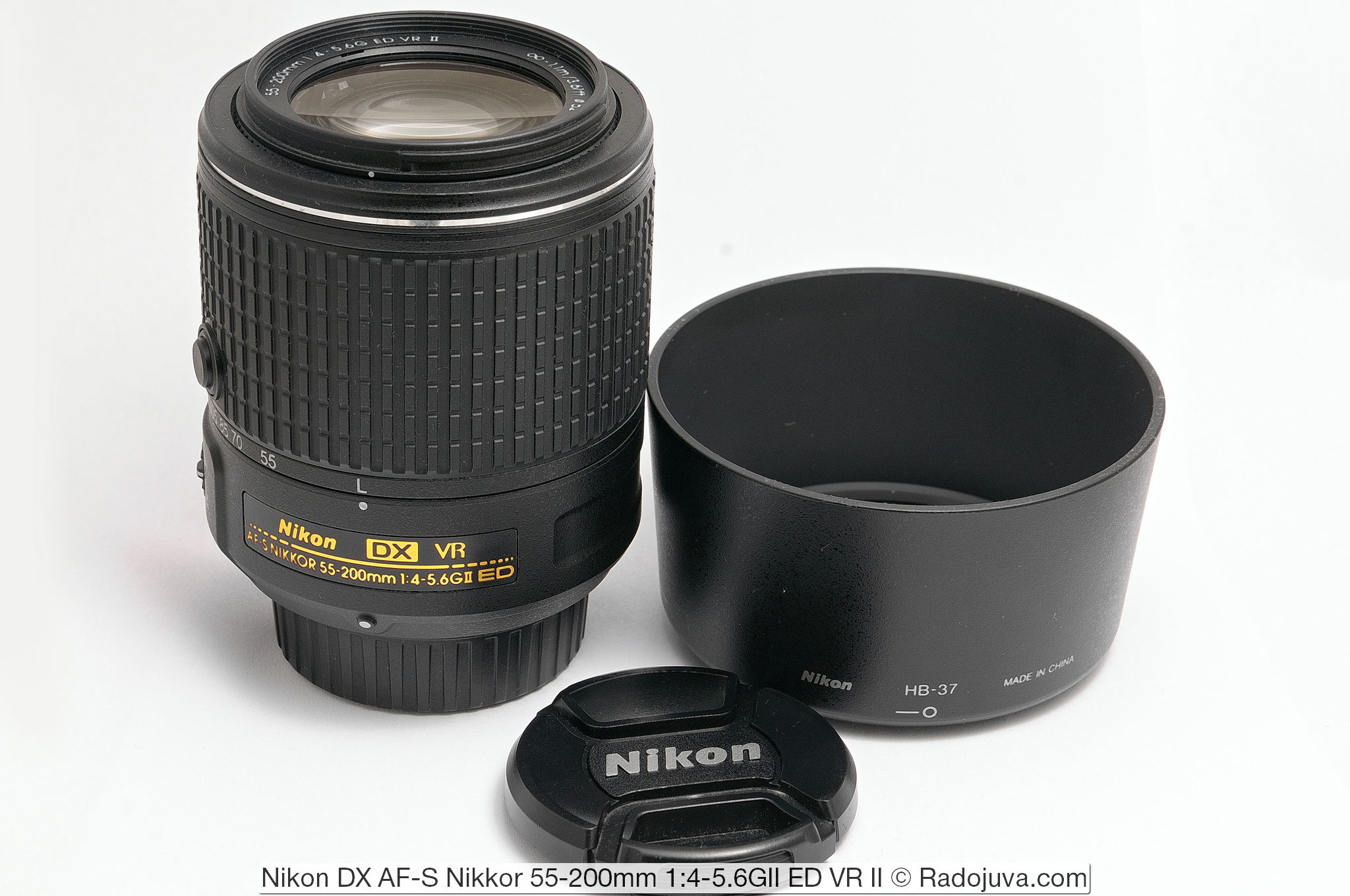 An accurate list of all Nikon DX Nikkor lenses