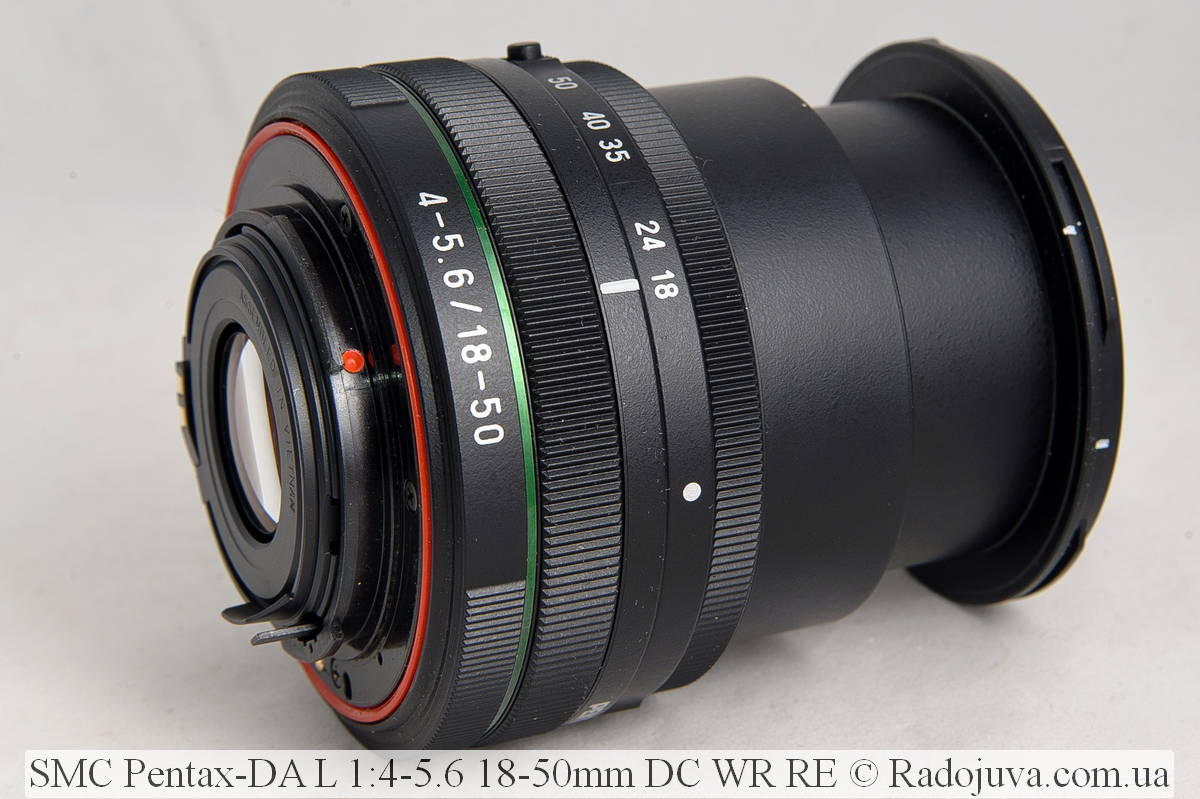 The Pentax DA L 18-50mm folds to a compact size, is weatherproof and uses a built-in focus motor. In general, this is the incarnation of a whale lens from Pentax in 2015, and as you know, a whale lens remains a whale lens in Africa. 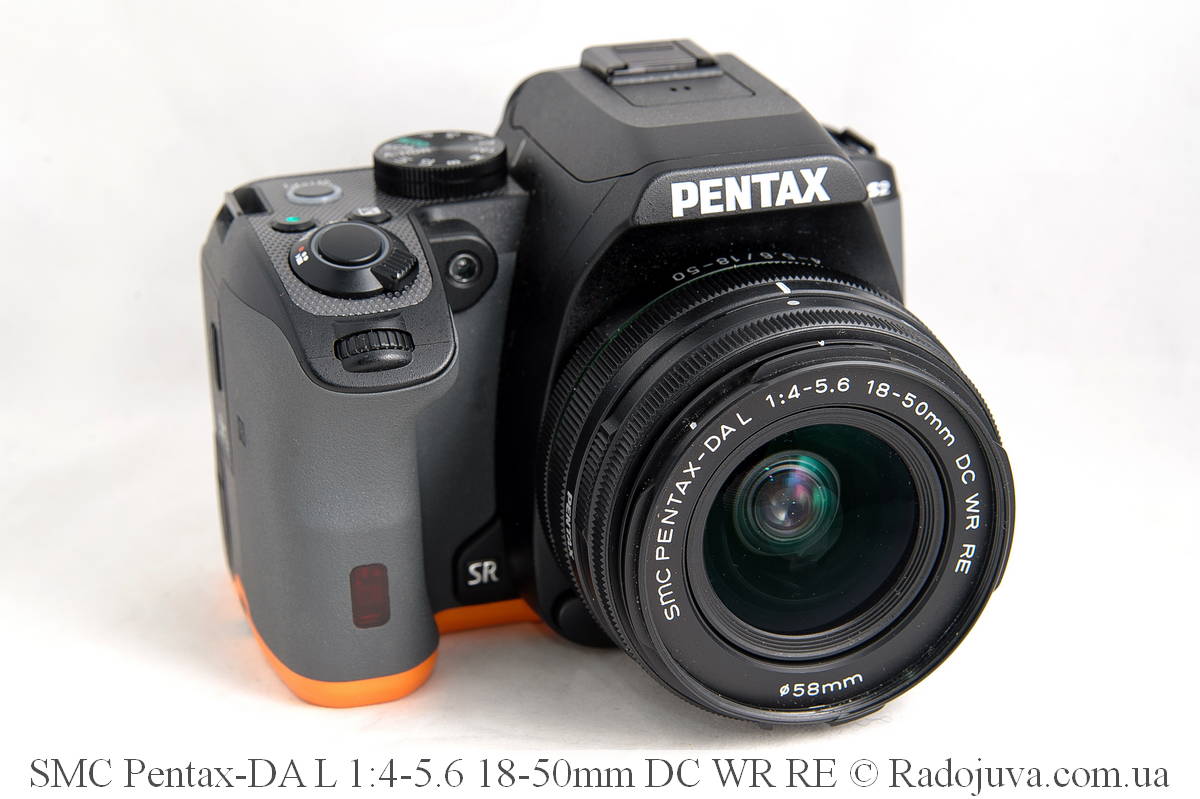 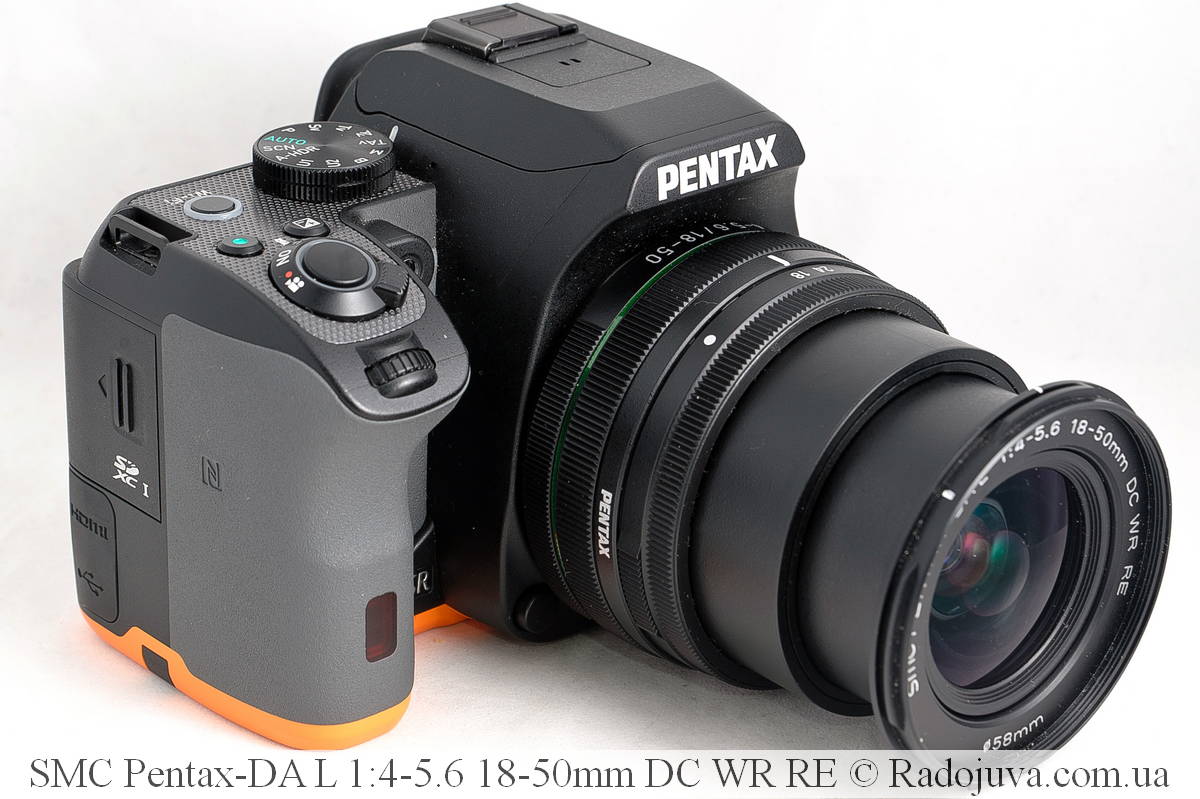 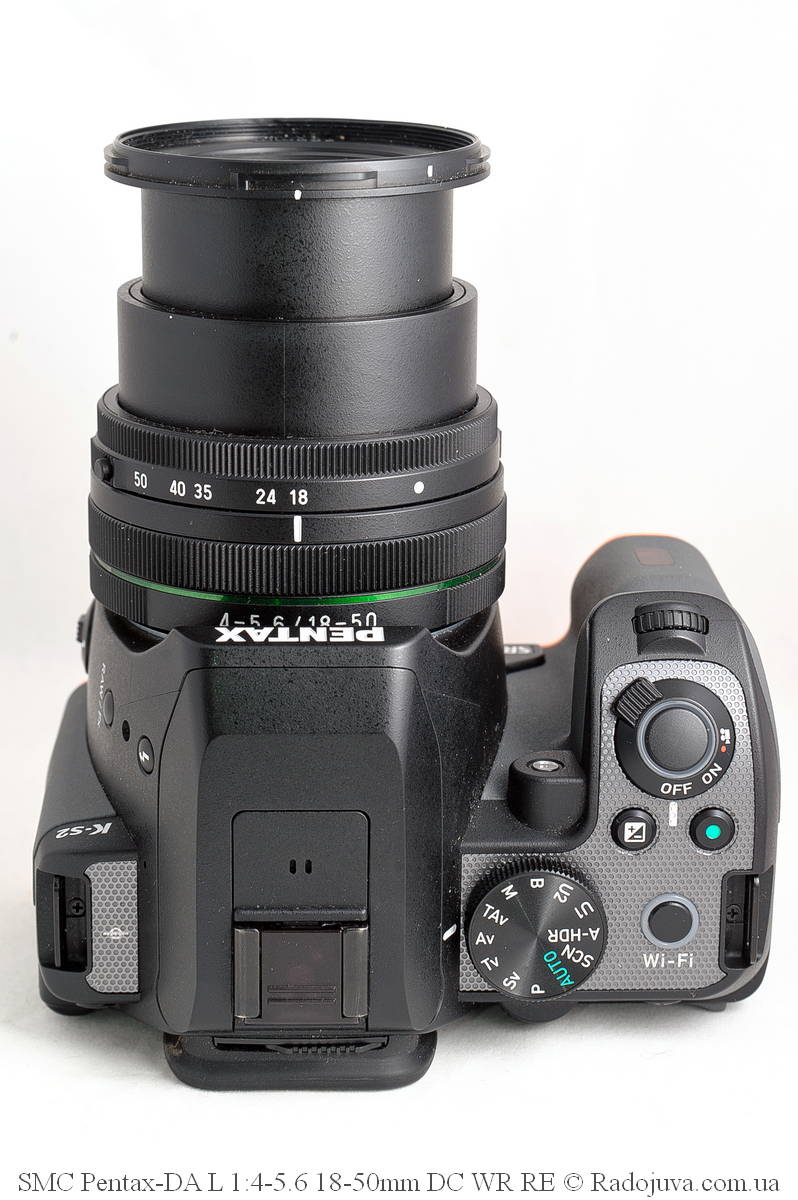 Spoiler: the lens from the review has a chip near the groove for attaching the hood. The lens fell with the camera from the chair to the floor, and therefore, perhaps its functional part was damaged.

Pentax DA L 18-50mm manufactured in Vietnam, has a folding plastic case with plastic mount. In the hands of the lens, it feels like a not-so-durable thing. In this case, the lens has weather protection with a large number of rubber seals. However, due to the highly retractable frame of the case, I hardly believe that it can easily endure heavy rain. Perhaps the lens is dust and waterproof only 'on paper' and only when folded. The front lens has a special water-repellent coating that makes it easy to remove liquid droplets and dirt from it.

Zoom ring is very narrow and uncomfortable. Seriously, this is a very uncomfortable little plastic zoom ring, but you have to rotate it constantly!

The retractable barrel frame consists of 2 sections. In the unfolded state it always seems that the lens barrel is extended to the limit and the maximum focal length is set, however, in fact, when the focal length is changed, the lens barrel moves in a wave-like manner: from 18 to 28 mm, it retracts, from 28 mm to 50 mm - extendable. The maximum lens length is available at 18 mm focal length, and the minimum at 28 mm. Pentax DA L 18-50mm does not suffer from spontaneous lengthening of the frame of the body, and as a result, a change in focal length.

When folded, the front part has a noticeable backlash, which manifests itself if you press it in the direction of the bayonet mount.

Fold the lens is not always as easy as we would like. Very often during an attempt to fold the lens by pressing the appropriate parking button the frame is jammed... It all depends on how you grip the zoom ring for parking. Additional force is required to park. This is a very annoying feature that kills any confidence in the build quality of the lens. The owner of the lens claims that he did not observe any problems with parking. Also, I didn't like the fact that when you unfold the lens, its trunk unpleasantly 'shoots'.

When folded down, you cannot shoot with the lens and the message 'The shutter cannot be released. Make sure the lens's zoom mark is set. in pos. when the shutter is released. allowed '.

There is no hood in the kit with the lens, and you can additionally buy a low-profile movie lens hood to the HD version of the lens. Most likely, such a hood can also be used on the SCM DA L version. 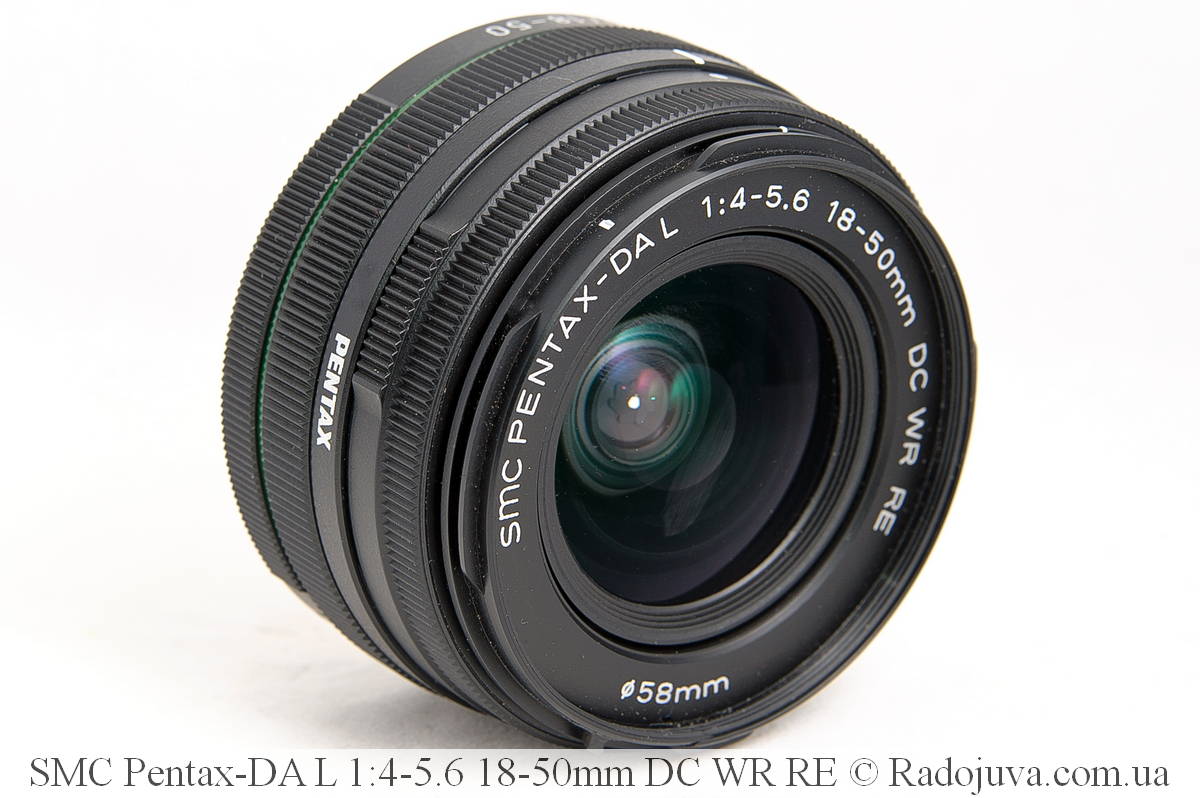 Unfortunately, I must state the fact that the focus motor buzzes quite strongly during auto focus. Of course, the noise from the DC motor is not as strong as that from the lenses for a screwdriver, but, nevertheless, I was very disappointed with this parameter. The noise of the motor is similar to the hum of a transformer, a similar hum I met in some Canon STM lenses (Canon 40 / 2.8 STM, Canon 55-250 / 4-5.6 STM).

Auto Focus Speed ​​- Medium. While testing the lens on the camera Pentax K-S2 I did not notice any serious problems in focus accuracy.

The minimum focusing distance is 30 cm, and the maximum magnification ratio is only 1: 4.4, which is less (worse) compared to other similar lenses in the 18-55 class.

On the lens no focus mode switch. To switch between manual and automatic focusing, use the switch near the camera mount.

Features of the electronic focus ring: 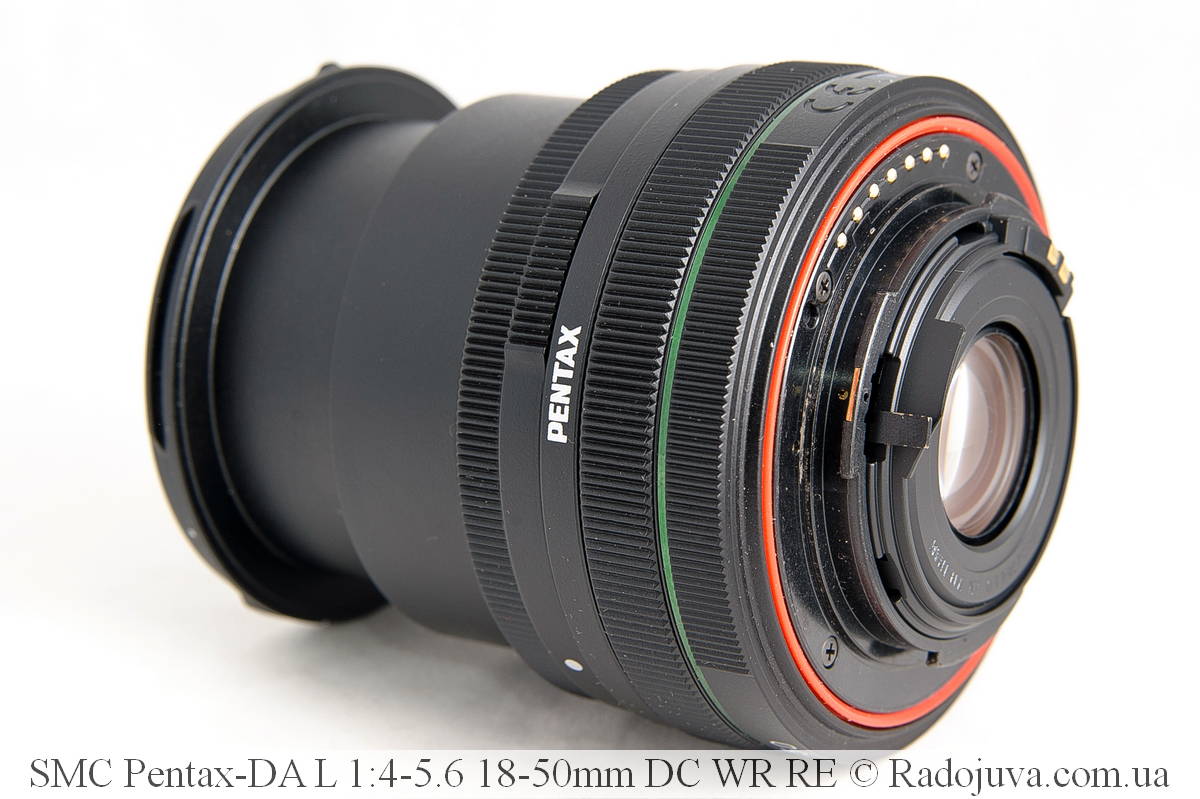 An interesting feature of focusing and zooming

The Pentax DA L 18-50mm has a very interesting feature. The lens automatically simulates the operation of a parfocal lens - when the focal length is changed, the Pentax DA L 18-50mm always remains pointed at the subject (maintains the focusing distance). The focus motor can be heard clearly during zooming. Of course, this also consumes some energy from the camera's battery.

If you put the camera in focus mode 'MF', focus on an object and perform zoom, then this object will always remain in focus.

It would seem that the 'Parfocal Lens Effect' is a trifle, but in reality it is a brilliant solution, especially for shooting video. The lens microprocessor automatically recounts and adjusts focus. Truth, the error is still very large and for perfect focusing, the lens should focus.

Pentax is not the first company here, I have long seen such an effect on the lens Canon 55-250 / 4-5.6 STM, where it is much more in demand than on a lens with standard focal lengths.

Diaphragm lens consists of 7 rounded petalswhich form a fairly even hole. Diaphragm closes to F / 22 by 18 mm and to F / 36 by 50 mm of focal length.

There are marks with a focal length on the zoom ring, the following is a list with the minimum numbers F available for these marks: 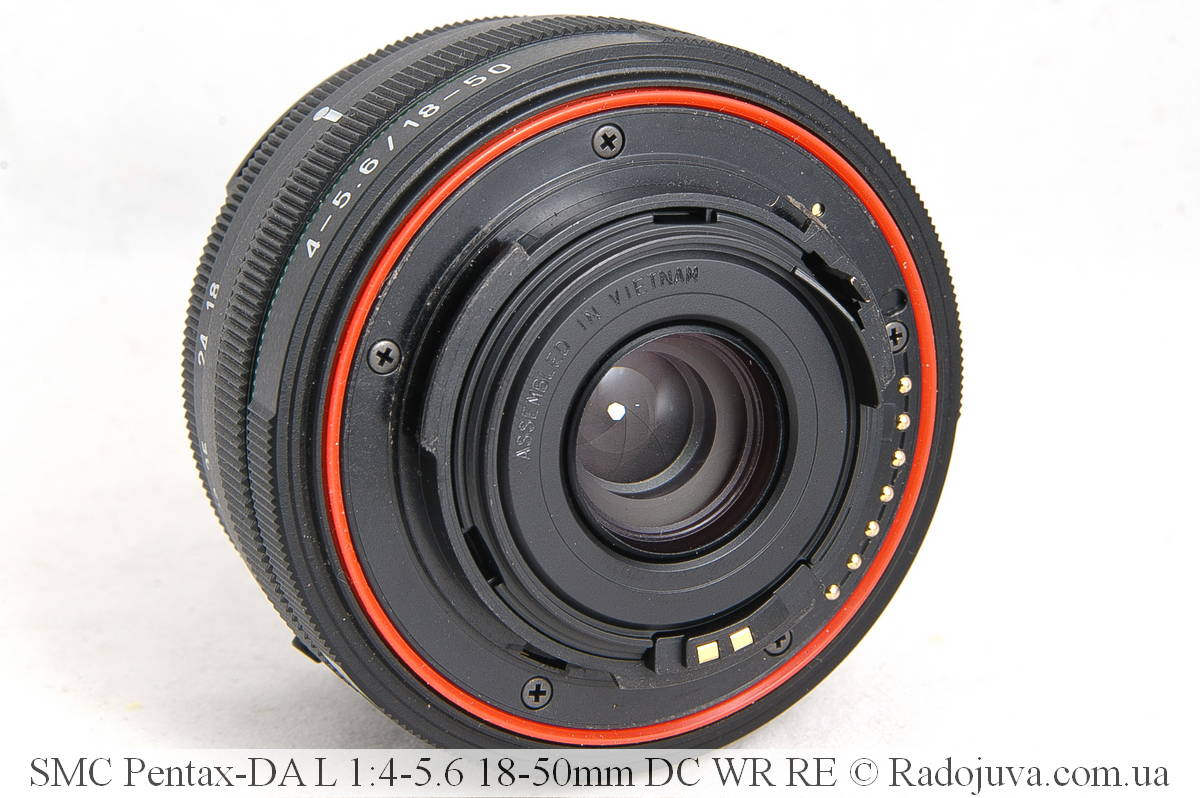 What is good is the normal operation of the lens in back and side light and, in general, good contrast. For such lenses, good and even strong contrast, along with low sharpness, is commonplace.

The lens is designed to work with modern digital cameras, the processor of which will automatically correct the vignetting, distortion and aberration of the lens. If you look at the on-camera JPEG with K-s2, then there are no special problems with these parameters. If you open RAW-files, then the experienced eye will find all of these shortcomings with interest.

All photos were shot on a Pentax KS-2 camera. The gallery shows on-camera JPEG without processing.

Archive with source RAW (PEF) files can be downloaded from this link. 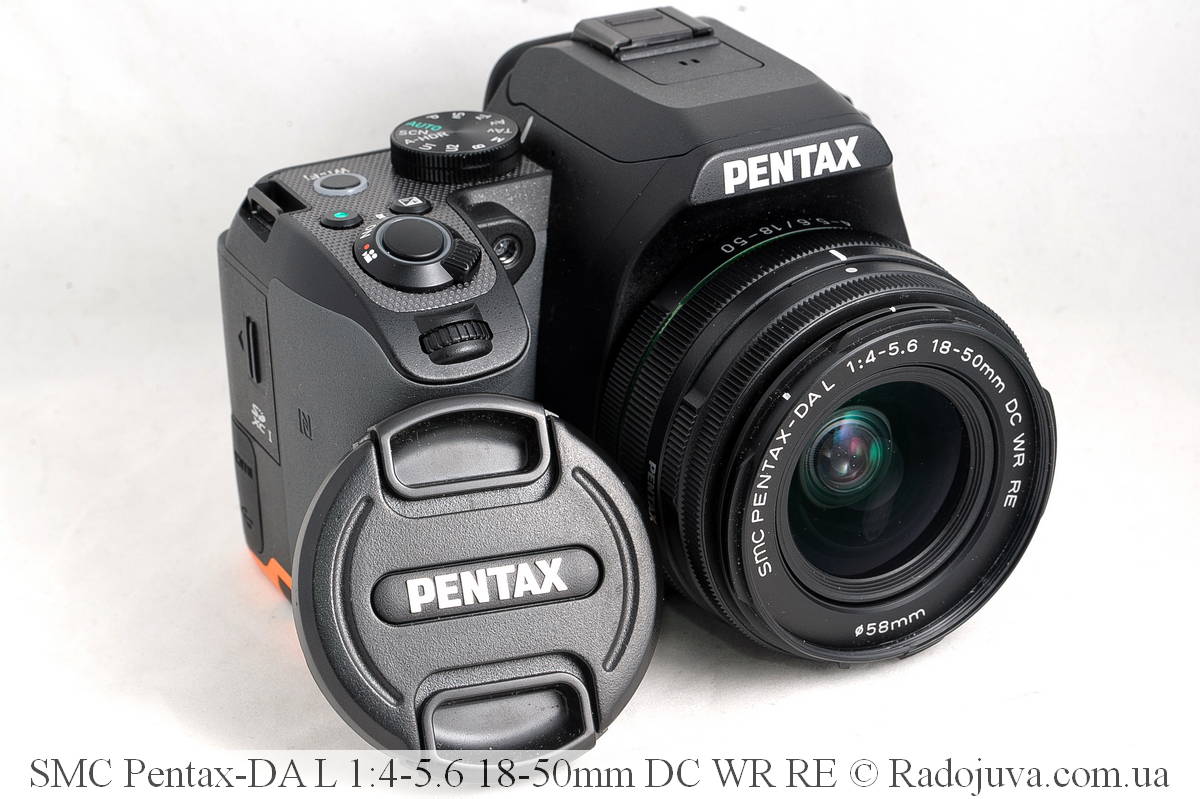 Of course, on the Pentax DA L 18-50mm you can shoot a lot of good shots. But still I hope that the HD version of this lens will be better.

The quality of his image will be enough for amateurs filming themselves and their families. I understand why the manufacturer did not make a super-quality lens - after all, the average person does not need super image quality. On the other hand, these mass lenses define the whole system.

It is hardly possible to buy a new SMC Pentax-DA L 1: 4-5.6 18-50mm DC WR RE somewhere, since it only comes with a camera. And in general, new kit lenses Pentax 18-55 (50) on the territory of the former USSR simply cannot be found. Prices for modern Pentax lenses can be viewed here.


In the comments, you can ask a question on the topic and they will definitely answer you, and you can also express your opinion or share your experience. For the selection of photographic equipment, I recommend large catalogs, for example E-Catalog. Many little things for the photo can be found on AliExpress.

SMC Pentax-DA L 1: 4-5.6 18-50mm DC WR RE - standard lens for Pentax cameras manufactured in 2015. In general, this is a classic 'whale' (read - weak) lens. It is very light and very compact (when folded). The Pentax DA L 18-50mm creates a contrasting image, but there are problems with sharpness. The Pentax DA L 18-50mm has a built-in focus motor, but not as quiet as we would like. In addition, an electronic focusing ring is used. He does not need a stabilizer, since the stabilization system is already built into the Pentax cameras. Eventually Pentax DA L 18-50mm may serve as the first low-cost full-time lens.