My experience with EVI (electronic viewfinder) consists in communicating with Sony a7, a7 II, a7R, a9 cameras, some mirrorless Panasonic, Olympus and Fujifilm. For a long time I shot on SLR cameras with OVI (optical viewfinder), and after them it was very inconvenient for me to use EVI, but over time I felt all its charms and radically changed my mind. 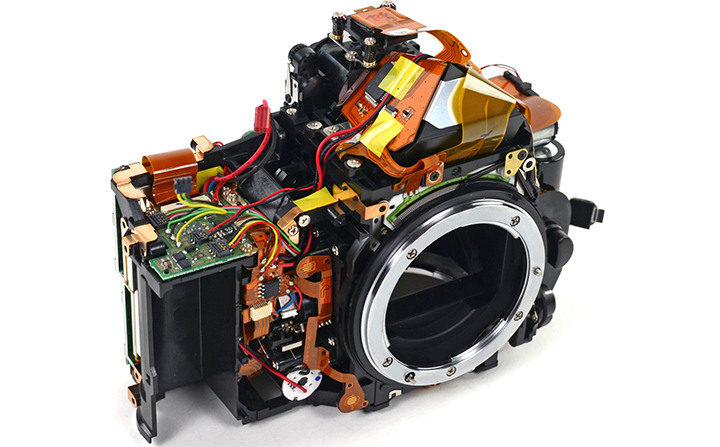 The internal structure of the camera

On the Internet, I often see phrases like "Once I tried EVI, I realized that this is not mine." Such words can be said about me, but, fortunately, life made me communicate with EVI more closely and come to different conclusions.

Please note that OVIs are of two types - for SLR cameras and for rangefinder (mirrorless) cameras. The JVI design for these two different types of cameras is fundamentally different. In this article, by OVI, I mean a viewfinder specifically for SLR cameras.

One of the most serious drawbacks of EVI is considered volatility. In order to see what you want to shoot, in the case of EVI, the camera must be turned on. In this case, the matrix of the camera will be turned on, the processor and the EVI sensor will work. All this consumes energy, and even worse, it takes time to turn on the sensor, processor, and other hardware. As a result, there is a huge lag between turning on the camera and displaying the image.

Electricity consumption can be cured with more capacious batteries, or spare batteries - it's not a big problem for me... But the EVI lags when turning on, turning off, exiting the camera from sleep mode, activating the sensor after it was turned off while viewing the footage, and so on, get on your nerves. Lag when turning on EVI - biggest flawwhich I highlight in EVI.

This drawback can be easily solved - for example, always keep the sensors on, or just make the lags very short. I believe that in the future there will be no problems with power consumption and lags when turning on / switching a camera equipped with EVI.

Is the finished result really visible in EVI?

A strong advantage of EVI is the ability to see the finished result before releasing the shutter. But there are reservations. The observed image is formed by a sufficiently small sensor of 1-2 Megapixels, which does not transmit the entire amount of data received from the camera’s matrix. In this case, the JVI is more informative, the matte screen of which, in fact, has a very large resolution. Also, the camera processor is not able to immediately apply all the enhancements for the image, such as control of dynamic range, color, noise reduction, distortion and vignetting. As a result, the image after the shutter is released may still be slightly different from the one I see in EVI.

I really like that when working with EVI, a finished picture (obtained after releasing the shutter) can be viewed immediately without taking your eyes off the camera’s eye. In the case of the JVI, you need to take the camera away from your eyes and look at the main display to see the received image. It turns out that with EVI much less time is spent on monitoring the shot material.

As for the small differences from the image observed in the EVI and the final frame (after releasing the shutter), this is just a processor limitation, which can be easily cured in the future. Yes, and many cameras already fully display in EVI directly the frame that will be after the shutter is released - with all additional image quality adjustments turned on.

EVI in the studio

Usually, sighting through an EVI makes it possible to observe the picture that will be at the time of shooting, but this may not always be convenient, and sometimes it is contraindicated. This primarily concerns shooting in the studio using pulsed light. The bottom line is that in the studio all frames are usually shot with manual settings exposure. For example, in the studio it is most often used exposure control mode "M". Suppose I set ISO 100, F / 4.0 and 1/125 sec. With these settings, the camera’s EVI will display a black rectangle, since there can be very little pilot light (pulsed flashes will be used at the time of shooting). It is practically impossible to focus on and compose the frame in such conditions. To overcome this inconvenience, on cameras with EVI there is a function that disables “displaying pictures with actual parameters” and includes “display simulation”. In simulation mode, the camera does not use user-defined parameters. exposure, but selects its optimal ones, in which the EVI produces a distinct image, through which you can focus on sharpness and compose the frame. If you turn on the simulation, then in this case it will be very convenient to endorse in the studio.

In the Sony a7 camera menu, the function that is responsible for the display mode is called 'Display. Live View '(Setting whether to display settings such as correction exposure, on the display screen). This function can take only two values ​​“Display. Param. ON ”and“ Display Param. Off. "

When I first got into a studio with a mirrorless camera using EVI, I did not know about the possibility of simulation and it was very difficult for me to shoot.

Of course, simulation of the display can be useful for other types of shooting, for example, for shooting with very slow shutter speeds.

EVI suffers from inertia - when rearranging a frame, the display of changes may occur with a delay, and the EVI may slowly rebuild with a strong change exposure filmed scene. For example, if I was shooting in the shade of trees, and sharply pointing the camera towards a bright street, then in EVI instead of the expected type of street, for an instant I will get a white spot that has normalized and will take the expected form over time.

With a sharp change in lighting, the Sony a7 loses consciousness and within a few seconds adjusts to the correct exposure.

Most likely, this drawback can be eliminated and in the future cameras with EVI will be deprived of this drawback.

They say that one of the main problems of EVI is the pixelation of the image. Perhaps this was a problem many years ago when sensors for displaying images in EVI had low resolution. With the cameras that I indicated at the beginning of the article, I did not observe or did not notice the pixels of the EVI display.

If some EVIs have such a disadvantage, then over time the number of pixels on the EVI sensors will increase and everyone will forget about this problem.

The EVI sensor has a constant or variable brightness within certain limits. On the one hand, this is a great achievement compared to the JVI. In the JVI, the brightness directly depends on the maximum aperture of the lens and the illumination of the scene. But constant brightness can play a trick on the eyes of the photographer. When shooting in bright light, I often saw that when I was vising through the EVI, my eye was tuned to a certain light intensity, and as soon as I took the camera away from my face and looked at what was happening without EVI, it took my eyes time to change to another illumination. The same thing happens when in the bright sun you bring the camera to your face, while in EVI you can’t see anything for a while until your eyes accommodate.

I think that this drawback of EVI can be solved with brighter sensors, as well as light sensors (similar to those that are in modern smartphones and automatically adjust the brightness of the display depending on the light).

Speaking about EVI and OVI, you need to immediately understand that the technology for displaying the future frame is directly related to the focusing system. Very fast and fairly accurate phase focusing systems based on separate sensors have been developed for the OVI. For EVI, phase or other focusing sensors should be placed directly on the camera’s matrix (SLT cameras do not count, since there is a mirror). So far, there is an opinion that focusing on mirrorless cameras with EVI is noticeably worse than on SLR cameras with AVI. But in fact, mirrorless cameras with EVI only need to pull up and refine their focus system a little, and some cameras with EVI focus already very, very well. Separately, there are SLT cameras, which also use EVI, but at the same time they have a fixed mirror and phase focusing modules, which are characteristic of cameras with AWI.

Conclusions on EVI and JVI

Some of these deficiencies have been corrected to one degree or another or are actively being corrected.

I can summarize that EVI technology has a lot to develop, its shortcomings can eventually be improved by the best hardware and software solutions. OVI technology has reached its logical end and does not have serious opportunities for improvement. At best, the JVI will move toward a hybrid JVI. Nevertheless, you need to understand that the JVI is a very ancient, proven technology that will please more than one generation of photographers.

Comments on this post do not require registration. Anyone can leave a comment. For the selection of a variety of photographic equipment, I recommend E-Catalog, Socket, M.videoand ebay и AliExpress.