According provided by SMC Pentax-DA 1: 1.8 50mm lens huge thanks to Petr Lewandovich. 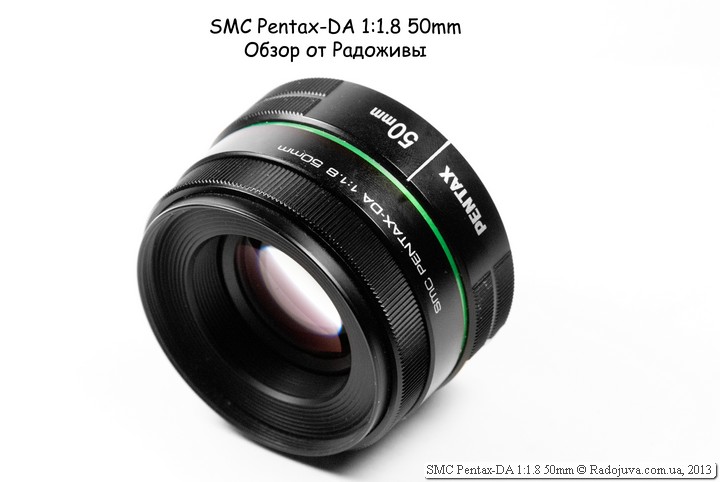 SMC Pentax-DA 1: 1.8 50mm - excellent fast fifty dollars for Pentax cameras. The prefix 'DA' in the lens name means the lens is designed for Pentax APS-C 'cropped' cameras. In fact, the lens can work on full-format cameras, for example, on Pentax film SLRs.

Progress has taken away from the Pentax-DA 50 / 1,8 all the charm of high-quality lenses - on the Pentax-DA 1: 1.8 50mm you will not find either the aperture control ring, or the focusing distance scale, or the depth-of-field scale, and no useful marks at all. But on the side there is the inscription SMC Pentax DA, the letters DA are made in the form of a hologram, like on cheap Chinese crafts that try to impress the buyer with the excellent quality of the goods with a hologram. 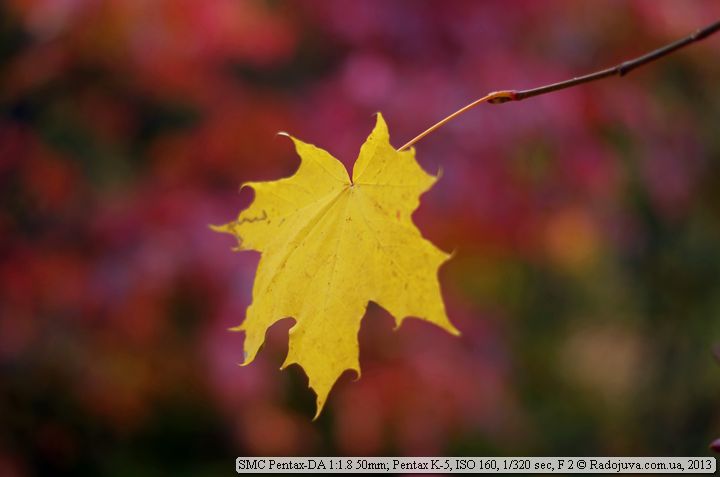 But the absence of various scales and marks when used on modern digital cameras will not cause problems. Hopefully, manufacturers are keeping everything out of the way by focusing on the image quality of the lens. The bayonet of the Pentax-DA 50 / 1,8 is made of plastic, and the plastic focusing ring. Anyway, the entire lens barrel is made of plastic in Vietnam.

Pentax-DA 50 / 1,8 no built-in motor focusing. Focus is very noisy, as it is carried out by the 'screwdriver' of the camera, while the lens emits a heartbreaking piercing sound, similar to a pig squeak. Auto focus speed is above average, but still not very fast. When focusing, the entire lens unit of the lens moves, and the front lens of the lens moves inside the barrel of the body. When mounted on a lens safety filter, then we can conditionally say that focusing is internal. The same focusing, without lengthening the trunk of the lens, have Nikon fifty - Nikon 50mm f / 1.8G AF-S Nikkor и Nikon 50mm f / 1.4G AF-S Nikkor... The minimum focusing distance is 45cm. The focus ring rotates 180 degrees in manual mode, and it is quite convenient to focus with such a large focusing ring pitch. When I used the lens on my camera Pentax K-5, then often such a bunch was wrong with focusing. The lens has a standard front filter diameter of 52mm. The aperture has 7 blades and can be closed up to f / 22. 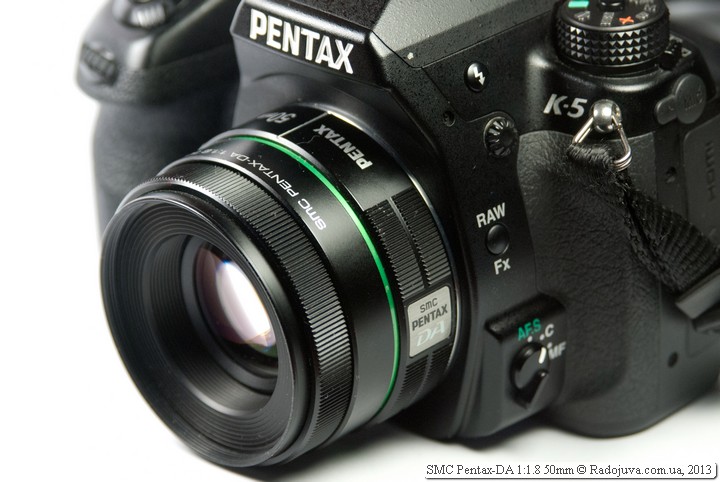 View of the Central Hall


Despite the unpretentious body design, the Pentax-DA 50 / 1,8 boasts good optical performance. I was surprised how this lightweight lens was able to deliver good image quality. If I had a Pentax camera, I would definitely take such fifty kopecks to my service :) Pentax-DA 50 / 1,8 - very sharp, with minimal vignetting at F / 1.8, very little distortion. The lens holds back and side light well, but still suffers from chromatic aberrations, which is not surprising for such aperture.

The parameters of the photo in the review:
Everything is filmed on Pentax K5 without further modification. On Pentax K5 EGF is 75mm (to be precise, 76.5mm). On-camera JPEG, 16M, 4 stars with Shake Redutcion enabled. Functions: distortion correction, correction. chromium. increased, noise suppression at high sensitivity, suppressed. noise at slow shutter speeds, compensation. illumination, compensation shadows were turned off. used white balance: 'Auto', 'Daylight', 'Shade' and 'Cloudy'. The size of the photos has been reduced to 3 MP. This is a review with cats :)

Catalog of modern Pentax lenses can look at this link.


Comments on this post do not require registration. Anyone can leave a comment. Lenses and promotions on them look at Moyo.ua.

The SMC Pentax-DA 1: 1.8 50mm is a nice little fifty with excellent image quality. It would be nice if the price was more democratic for a plastic budget fifty dollar.