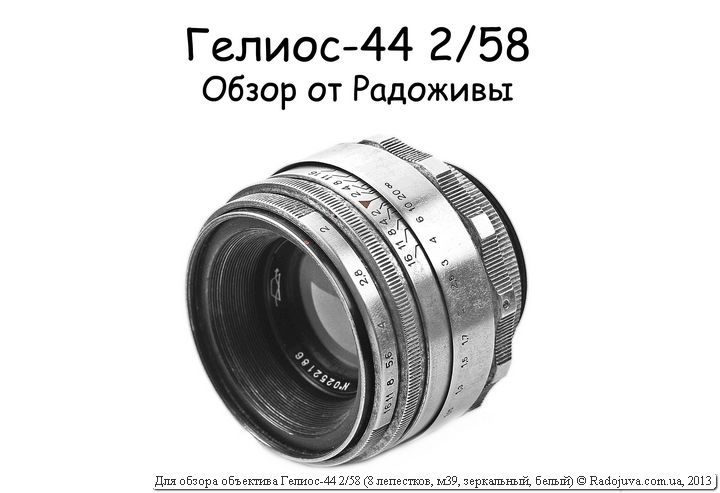 Exist the largest number of lenses of the 'Helios-44' family. This review presents a Helios-44 2/58 lens with a white metal frame, 8 diaphragm blades and a M39 mounting thread. Manufactured at the Krasnogorsk plant, serial No. 0252188. This lens is almost the same Helios-44 2/58, the difference is only in the number of aperture blades.

Video review can be viewed at my youtube channel:

Everything described in the review about Helios-44 2/58 can be attributed to Helios-44 2/58 from this review. I did not describe anything in detail because of the similarity of the lenses. 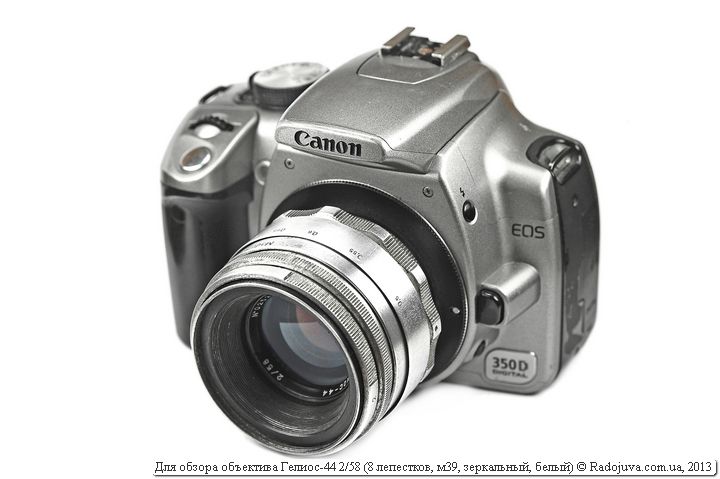 Helios-44 on a modern camera

It is the 'Helios-44 2/58' lenses (without other letters in the name) that are found in white and black body frames, except for the frame color the lenses are no different. Lenses Helios-44 2/58 were produced in Krasnogorsk (KMZ) and in Minsk (MMZ), the manufacturer can be recognized by the logo. There are export versions of the lens with the name 'Helios-44 2/58' made in USSR, and there are also lenses with the letter 'P' in the name, and the name itself can be written as 'Helios-44 1: 2 F = 5,8cm P'. 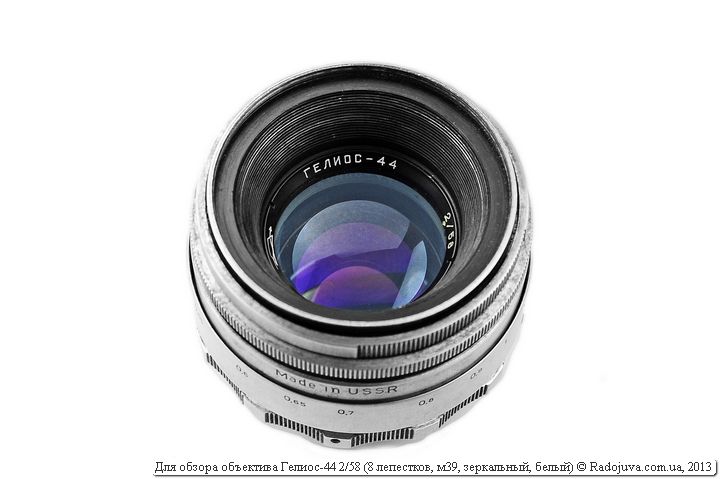 Helios-44, one of the first

Look at modern the lenses 'Zenitar' и 'Helios' can at this link.

Enlightenment of the front and rear lens Helios-44

How to use with modern cameras?

Lenses with an M39 mounting thread (for SLR cameras, M39 X 1 / 45.2), such as the lens from this review, are very easy to use on almost any modern digital camera (both SLR and mirrorless), for this you just need to choose correct adapter. The cheapest adapters can be found aliexpress.com.

For use on modern digital SLR cameras Canon EOS need M39-Canon EOS adapter, you can buy such an adapter (adapter) here. Also, an adapter M39-Canon EOS can be easily replaced with two adapters: M42-Canon EOS + M39-M42. Detailed information on the use of such lenses with any Canon EOS cameras will find here.

An adapter is required for use on Nikon SLR cameras M39-Nikon F, you can buy such an adapter (adapter) without a lens and a chip here. Also, one adapter M39-Nikon F can be easily replaced with two adapters: M42-Nikon F + M39-M42. Detailed information on the use of such lenses with any modern Nikon cameras will find here.

How to use this lens with cameras of other systems (Pentax, Sony, Fujifilm, Olympus, Panasonic, Samsung, Sigma etc.) - ask in the comments and you will be prompted. If you have any questions on compatibility and adapters, ask in the comments (comments do not require any registration at all, any user can add a comment).

Comments on this post do not require registration. Anyone can leave a comment. Lenses and promotions on them look at Moyo.ua.

Helios-44 side view and aperture view

Interesting historical facts and thoughts about the history of Helios-44:

All G-44s, starting from the very first from KMZ and ending with the latest modifications, are made of the same grades of Lytkara optical glass without the use of STK (super heavy crowns). Another thing is that, probably, under Stalin and for some time under Khrushchev, glass was brewed more carefully than under Lelik (optical glass belongs to the defense industry!). At the beginning of perestroika, state acceptance was involved and the build quality of the optics became somewhat better.

The predecessor of the G-44 was the BTK-2/58 ("Biotar Krasnogorsk"), which was actually made in Krasnogorsk according to the German drawings of the Biotar from Shott glass. But G-44 was never made of it. The blanks of Schott's glasses were removed from Jena after the surrender of Germany together with German engineers and optical workers who taught ours in Krasnogorsk and Kiev at the Arsenal.

If there is useful information about Helios, share it in the comments. You can also leave impressions about the lens there.

Familiarity with the Soviet Helios brand lenses I recommend starting with an inexpensive and common lens Helios-44-2 2/58 (aka HELIOS-44-2 2/58). The following links can look at modern lenses Zenitar и HELIOS.