Nikon is famous for not changing the mount of its SLR cameras since 1961. All lenses released since 1961 (sometimes earlier) mechanically compatible with all Nikon cameras, including with modern Nikon digital SLR cameras. 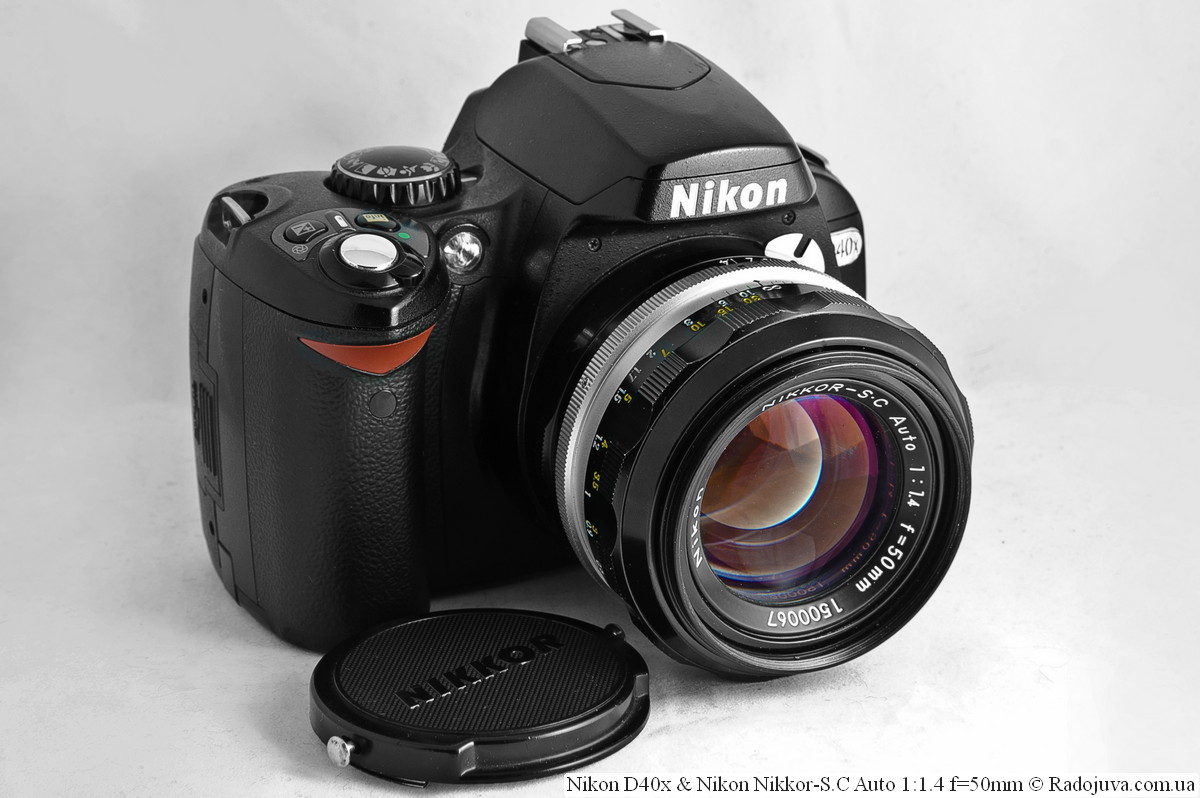 Original (NON-AI, without AI conversion) lens Nikon Nikkor-SC Auto 1: 1.4 f = 50mm on the camera Nikon D40x. On such cameras, such old lenses are installed without alteration. Nikon D40x and similar cameras listed in this article do not have a diaphragm rheostat and use a “recessed” aperture limit lever, making it easy to use any old Nikon F mount lenses on them.

All old mirrored lenses with Nikon F mount are divided into: 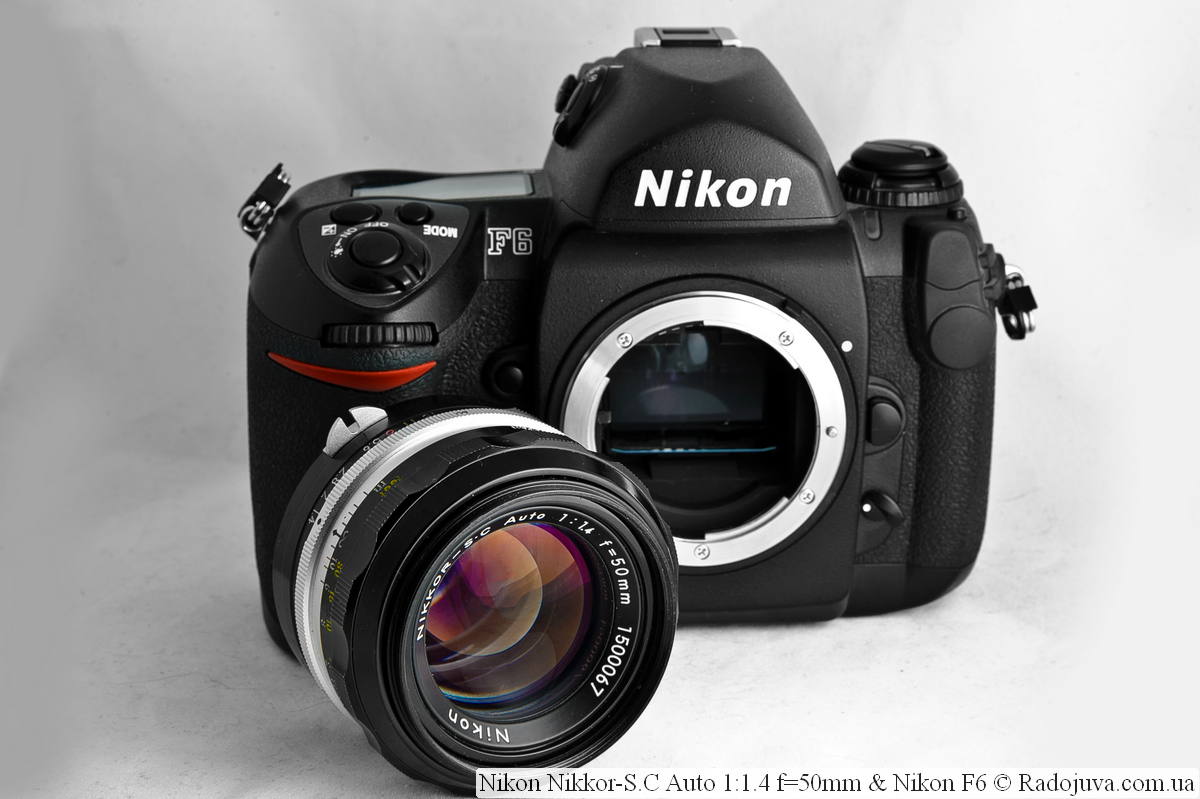 Original (not converted) Nikon Nikkor-SC Auto 1: 1.4 f = 50mm and TOP film Nikon F6 Camera. Due to the diaphragm rheostat, this original lens cannot be mounted on the camera without additional alteration of the lens or modification of the camera.

All Pre-AI (Non-AI), AI, AI-S, AI converted lenses have a blinking aperture. This means that when the lens is attached to the camera, the aperture opens fully. The aperture will close to the set value only when the shutter is released. The camera will automatically close and open the iris when you press the shutter button. The mechanism for closing the diaphragm is realized through the "pusher" and "jump rope". All modern Nikon lenses have the same design (except for specific Nikon E). 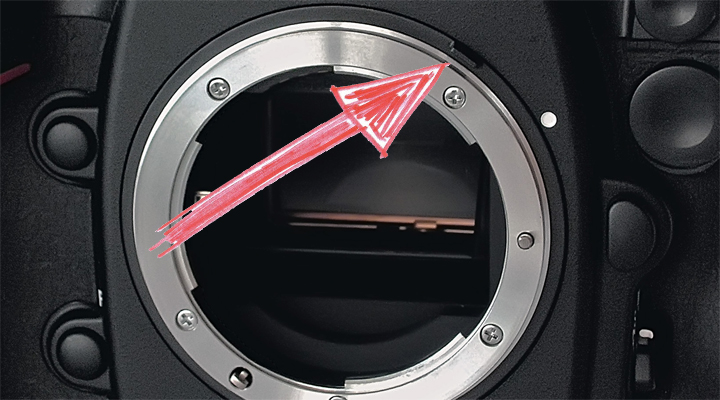 The problem with installing old PRE-AI lenses on modern CZK

Here is the exact list of cameras on which it is not possible to mount PRE-AI lenses due to the protrusion of the rheostat:

Nikon Df can hide the rheostat, which is why there are no installation problems. 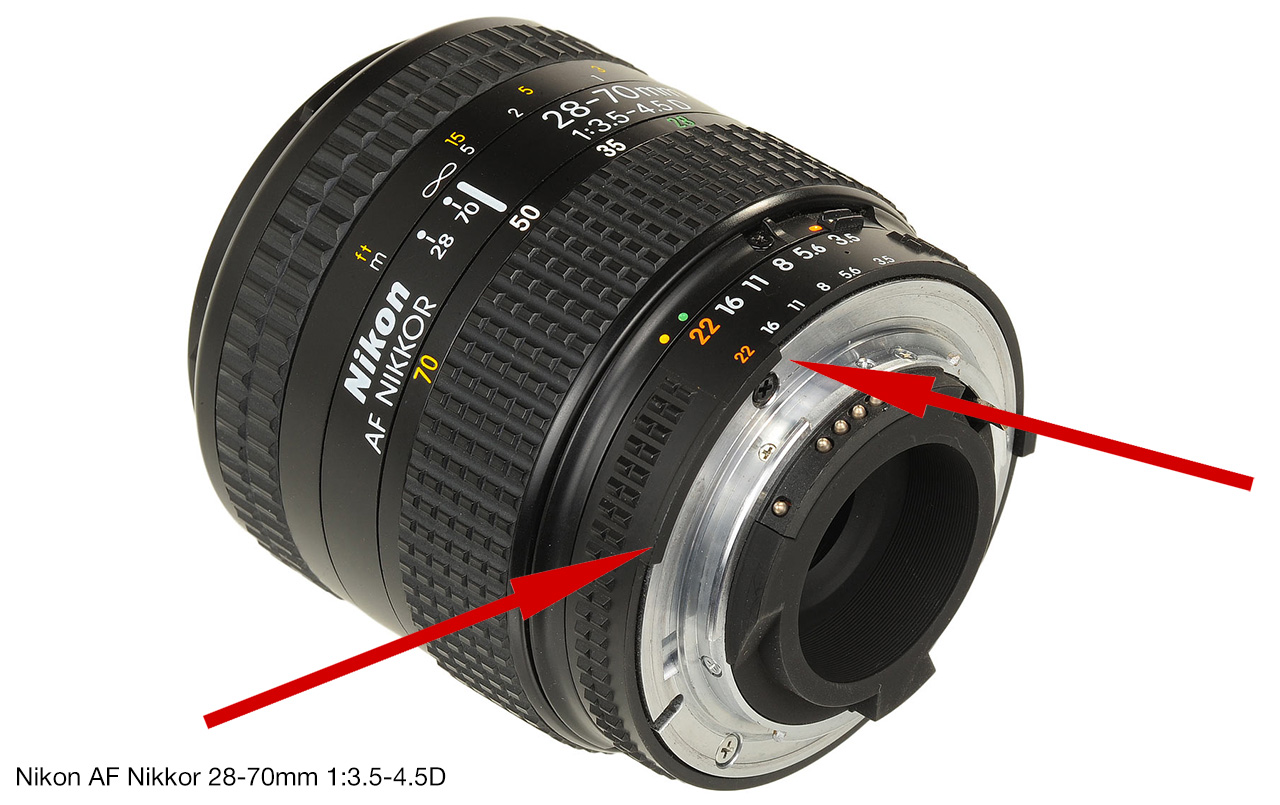 A lug for transferring the aperture value on the lens, which engages with the aperture rheostat on the camera. Shown using an example lens Nikon AF Nikkor 28-70mm 1: 3.5-4.5D 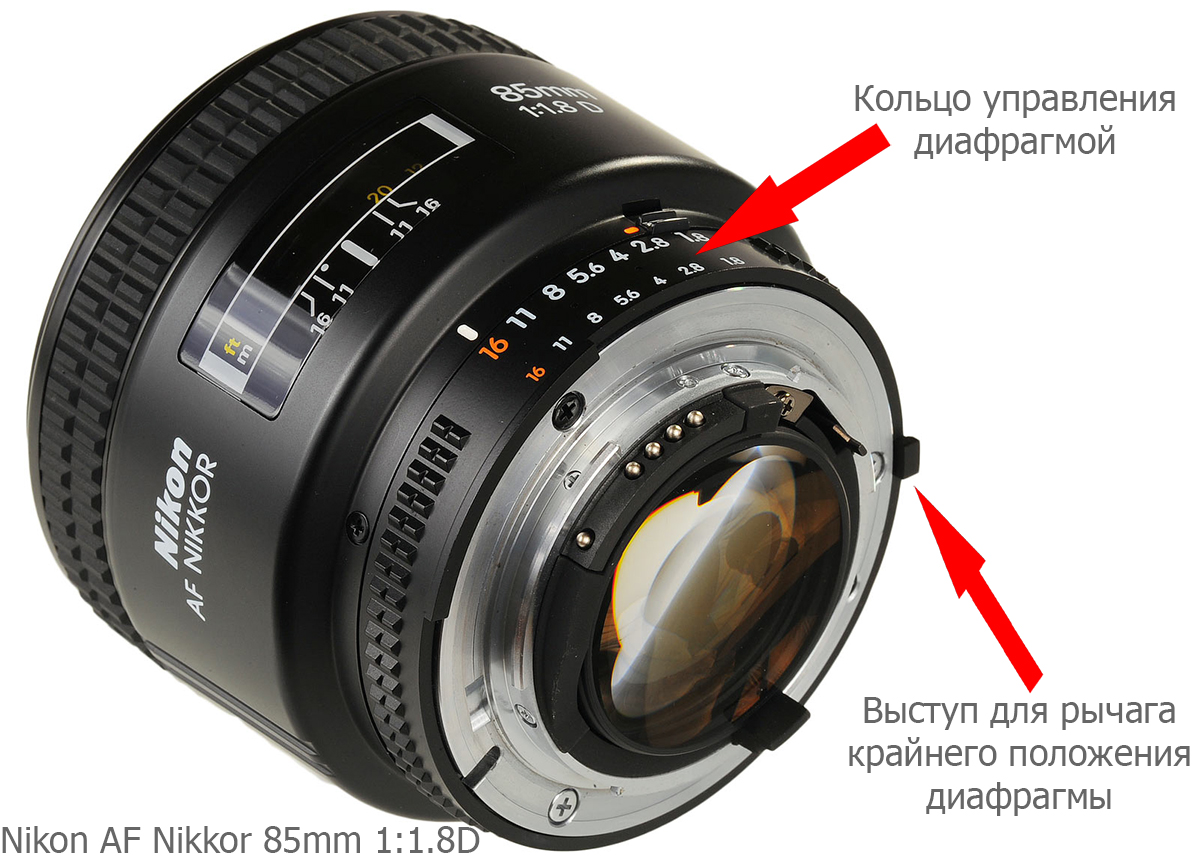 Lug for reading the extreme position of the aperture ring on the lens Nikon AF Nikkor 85mm 1: 1.8Dwhich is a NON-G type lens, that is, one that has an aperture control ring.

For automatic iris control, such cameras need to know for sure that the aperture control ring is set to the extreme position (maximum F number). If this is not done, then the camera display will show error message 'FEE' (the aperture ring is not set to the correct position). When the diaphragm ring rotates to its extreme position, this lever moves counterclockwise. For cameras with a diaphragm rheostat, such a lever is not required, since the rheostat itself takes over its function. The lever EE for reading the extreme position of the diaphragm ring is shown in the figure below. 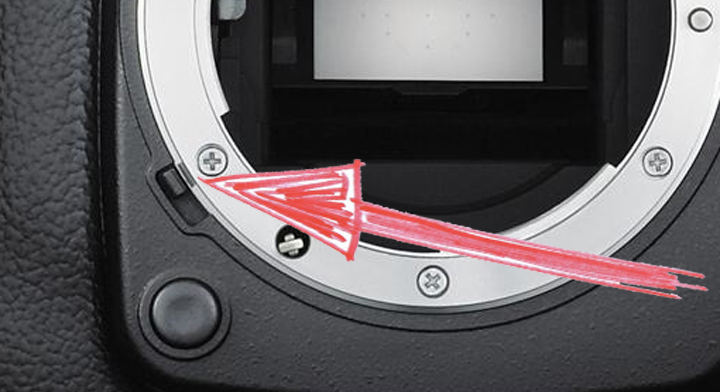 Lever EE for reading the end position of the diaphragm ring, the lever moves, but does not "sink"

And here are the cameras

have a different lever design EE... The lever is 'recessed' into the body of the camera rather than displaced, so the lever does not interfere with the aperture ring protrusions of PRE-AI lenses. 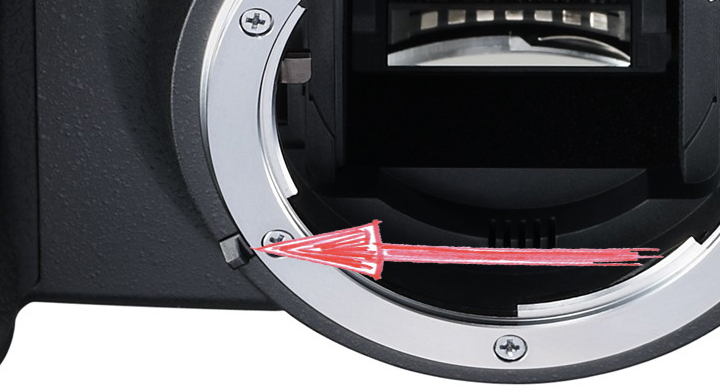 EE lever on low-end Nikon cameras. When the lens is mounted, it “retracts” and does not interfere with the installation of any lenses with Nikon F mount

Some cameras, such as Nikon D3400 и D3500 deprived of this lever at all. On these cameras, you can easily install all PRE-AI lenses. 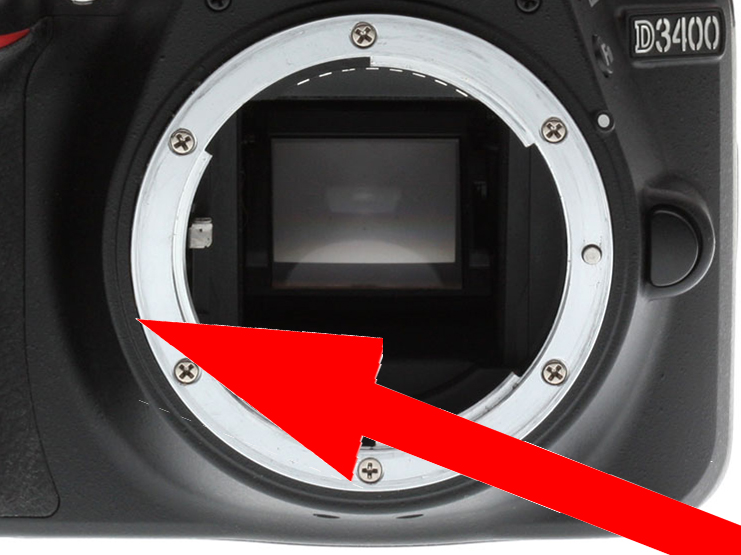 To summarize, PRE-AI lenses cannot be mounted on cameras:

PRE-AI lenses are easy to mount on cameras:

PRE-AI lenses are easy to convert to AI, usually for this part of the aperture ring is ground off and a protrusion for the rheostat is added.

Due to the lack of a diaphragm rheostat gauging exposure not available with cameras:

Measurement exposure with old lenses is only available on cameras that have a diaphragm rheostat:

How to use old Nikon lenses on modern DSLRs and system cameras, see 'Using old lenses'.

What are old lenses for, if you have modern autofocus?

Nikon has a lot of experience in creating lenses and a very large fleet of old high-quality optics, which can be purchased for little money and get an excellent image result.