Multiple exposure Is just a multiple Exposition the same frame. With multiple exposure, the matrix or film is exposed several times. To put it quite simply - the camera “takes pictures” several times, and the result is only one image, while all the individual photos are combined on one. How it looks - see examples. 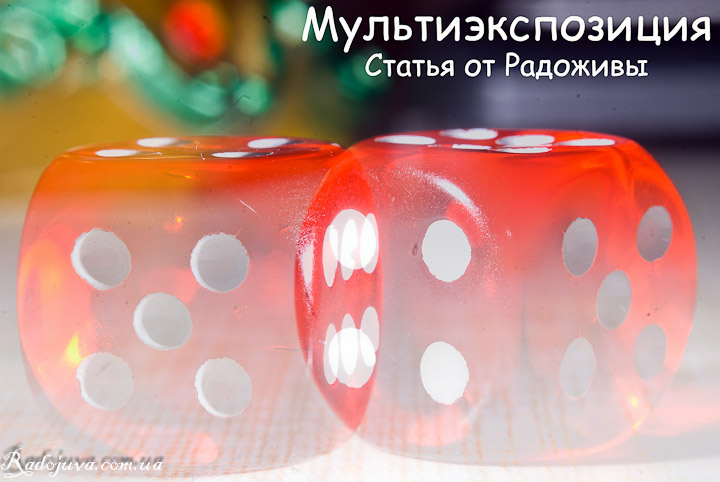 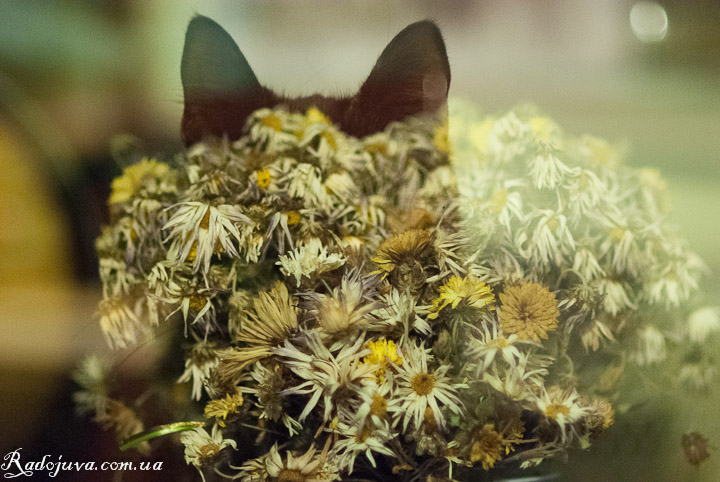 For film, it was more difficult to calculate the shutter speed for the overall final frame than for each frame separately. If you just take several pictures on film with a normal exposure, for each of them separately, the resulting image for a multiple exposure will be overexposed (overexposed). Therefore, each separate frame on film in a series of frames for multiple exposure had to be made taking into account the exposure of the film by other pictures. Also, on the film it was possible to do ME on the negative or positive. In digital photography, everything is much simpler - you you need the number of shots with normal exposure (for each frame individually), and the camera after the last shot simply combines them into a finished image.

The problem with some CZK cameras is the fact that multiple exposure turns off automatically after a certain time. On mine Nikon D90, D200, D80 multiple exposure turns off after 30 seconds. This drawback will not allow me, for example, to take one shot of the city in the ME in the morning and the second in the evening, to create an interesting effect. In this regard, film cameras and MEs using software (software like Photoshop) are much more efficient. Although, you can cheat and use camera overlay functionTrue, not all cameras can do this. Then, you can shoot anything and anytime without the ME mode, and then overlay frames on top of each other.

Number of frames in multiple exposure

In general, multiple exposure requires at least 2 frames, so it is “multi” - “many”. The maximum is unlimited. But on digital cameras, it's usually worth limiting the number of frames to create a multiple exposure frame. For Nikon, this is usually 3-10 frames. The number of frames is just an advantage over the software method, since each photo in Photoshop will have to be added to the ME frame manually, and the camera will do everything by itself. 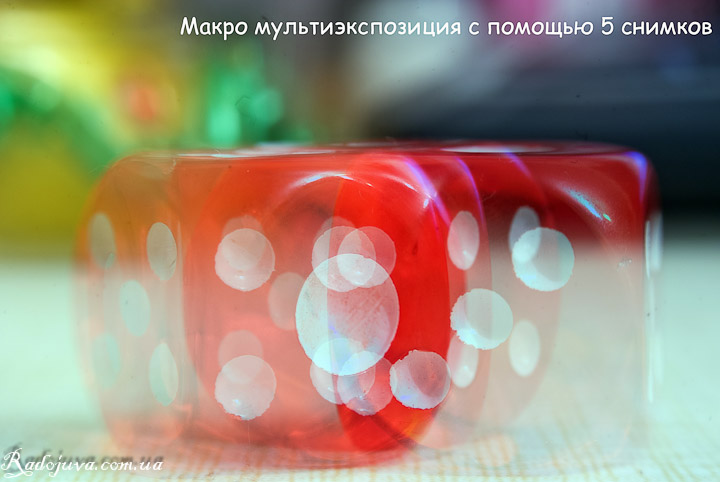 Multiple exposure with a large number of frames 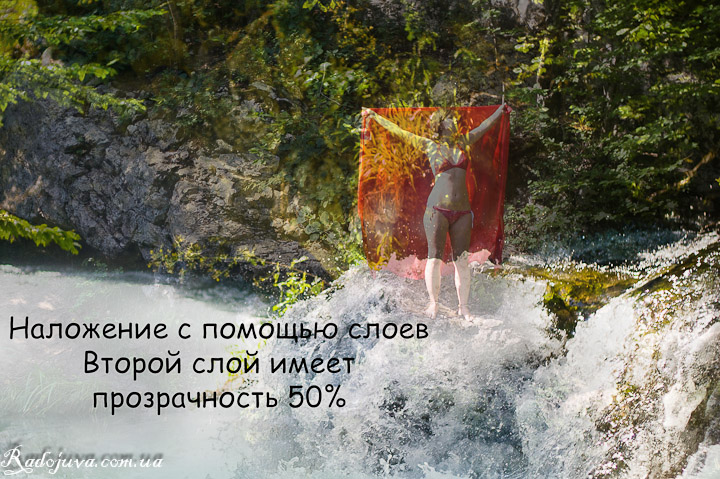 Why can I use ME?

1. To create interesting art frames, various kinds of entertaining pictures, etc., about this below.

2. To reduce noise and better study of color saturation.

In general, multiple exposure is used to create very unusual, truly highly artistic photographs, photographs with a difficult idea or an unusual picture. To reveal the whole possibility of ME, you need to think over the frame a little, come up with an idea - just merge two frames and get a "candy" will not work. Also, ME can be used to reduce noise and more elaborate colors - this is used by landscape photographers. Personally, I adjust the colors BB, noise level and other important parameters mainly in the RAW converter, and rarely use MЄ for landscapes.

1. Simple multiple exposure of the same subject - can be used for:

a) duplication of the subject, its reproduction in the frame. Any effects when changing the same subject in the frame.

b) creating a motion effect, as well as creating the so-called motion-picture. For example, you can use multiple exposure to create the effect of the motion of the moon, a car, or any moving object in the frame in the frame. The only drawback is the fact that each image can be translucent.

To create artistic underlays or overlays on the main subject in the frame.

This is a very popular technique. The camera should be fixed in the same place, usually this is done with a tripod. The subject of the shot should also not change. Several shots are taken in the ME mode at the same focal length, aperture, shutter speed and iso - the difference is only in the focus point. The result is a “fabulous” effect. 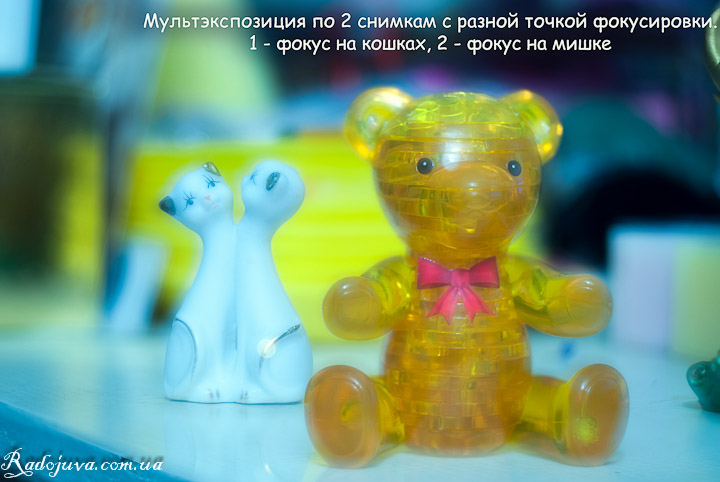 On the forums, professionals call such pictures "cartoons" due to the fact that some unusual cartoonish effect appears. If interested, then similar "fabulous", airy effects can also be obtained if you use monocle for shooting. Personally, I can’t always tell monocle from ME of this kind. 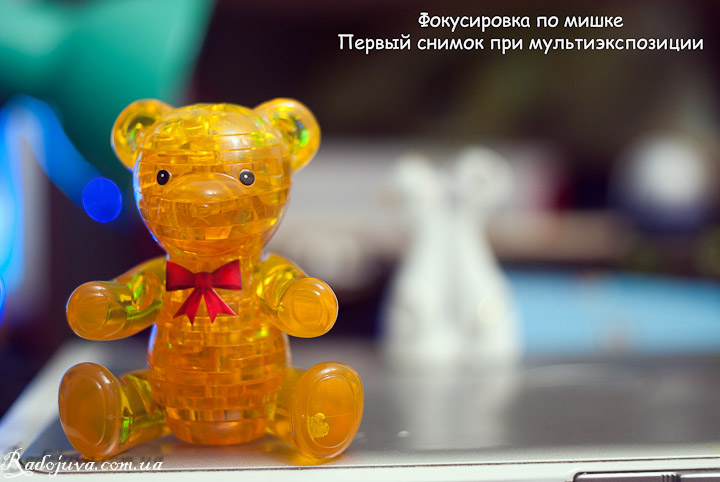 The first shot of 2 in a series of multiple exposures. Front subject focus

After the first shot, we translate the focusing distance to a different position, and focus on another subject. 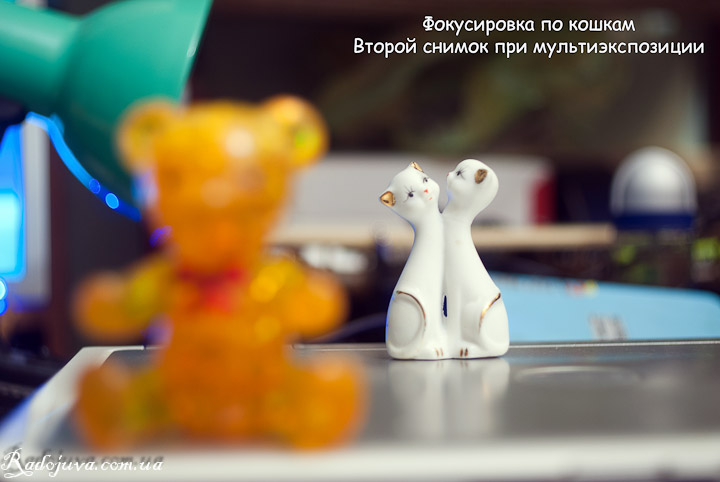 The second shot of 2 in a series of multiple exposures. Rear focus

Then the camera combines both images into one. A characteristic effect on the face. 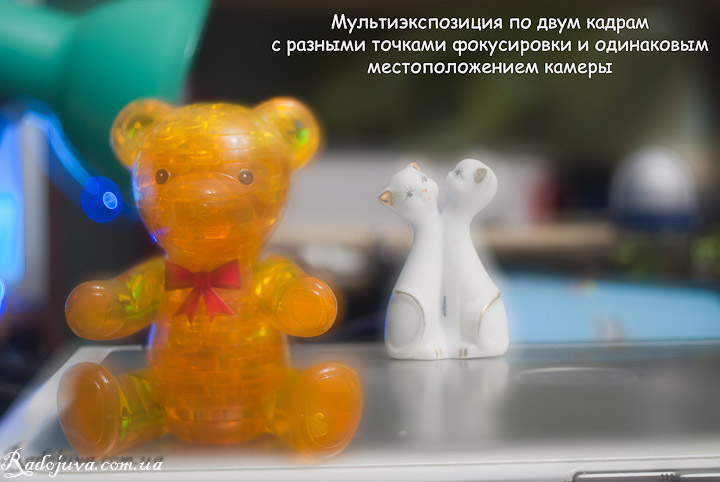 This method can be modified in many ways, for example, the first picture (substrate) can be normal focus on the subject, and the second picture (overlay) can be a picture of the most defocused space around the same object, for this it is enough to put the focus ring in the maximum or minimum position. 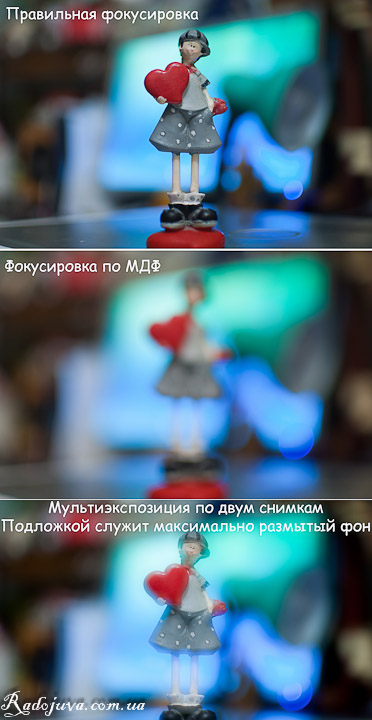 Multiple exposure of the same scene with the same focus point, but different focal lengths.

This effect is known simply as “zoom play”. It is also done simply - in the ME mode, several pictures are taken from a tripod of the same subject and at the same focus point and at the same settings, but with different focal lengths. In short, we just turn the zoom ring and simultaneously take pictures in the ME. The result is a snapshot like the one below. A similar effect can be obtained using a long excerpts - for example, an exposure time of 30s, where the frame is exposed for 15 seconds at a wide angle of the lens, and the remaining 15 seconds at the long end of the lens - the main thing is to sharply increase or decrease the zoom. There are also modifications with a zoom, when the emphasis is on its smooth change. 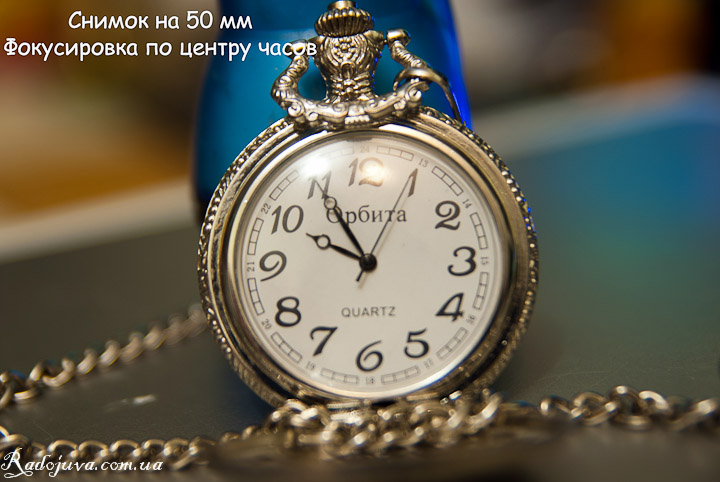 The first shot at multiple exposure with different focal lengths

Then we just change the focal length of the lens, focus on the sharpness in the right place of the image and take the next frame in a series of ME pictures. 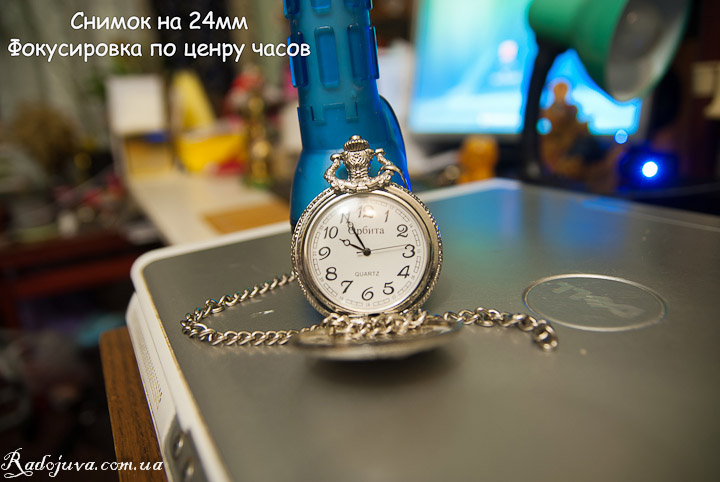 In the interval between 50mm and 24mm, another 8 shots were taken in the multiple exposure mode on the camera Nikon D200 and lens Tamron 17-50mm F / 2.8 XR Di II LD Aspherical (IF), after which the camera provided the following result: 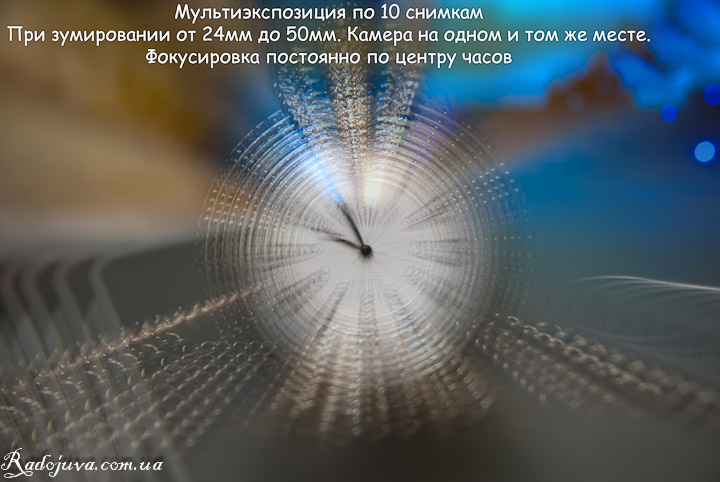 Multiple exposure over 10 pictures with a change in focal length

Multiple exposure with different shutter speeds
For example, you can do a night portrait in this way with a flash. The first shot in a multiple exposure series is taken with a tripod with a short flash shutter speed, after which the person leaves the frame, and the second frame is made with a long shutter speed to properly expose the back scene. With this method, the person himself and the pretty rear lights will be clearly visible. The same effect, in principle, can be obtained in the Slow Sync flash mode.

In general, ME is a creative process, you can think of a lot of other tricks and prims of photographing with ME, I have described the main ones. I almost always use multiple exposure from a tripod... Without a tripod, creating a “fabulous” effect, a zoom effect is very difficult to achieve. With ME in real life I work little, due to the specific genre of photography, therefore the examples in this article should be considered exactly as examples of ME and some of the possibilities of ME. And with the help of ME, you can create frames in the style of “light painting”, for example, like these ones. 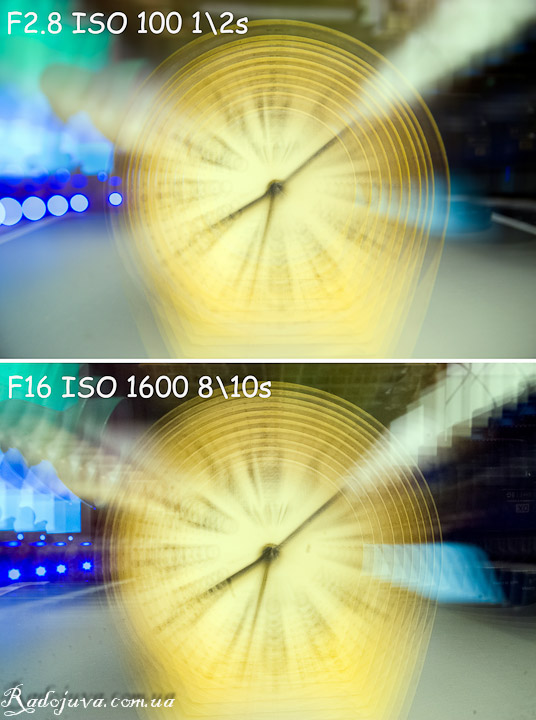 Creative process in multiple exposure. The difference in the picture at different apertures

Multiple exposure is a great tool in the hands of the photographer, but like any other tool, ME needs to learn how to use it. Some photographers spend their whole lives to become masters in photography made through ME. ME is mainly based on the effect of overlaying images on top of each other, in many cameras there is even a separate function for ME, and if there is no such function, then ME is easily implemented using layers in a graphical editor. Using ME, you can create quite interesting and unusual photos.