How to take pictures with your hands. Photo tricks. Part 3 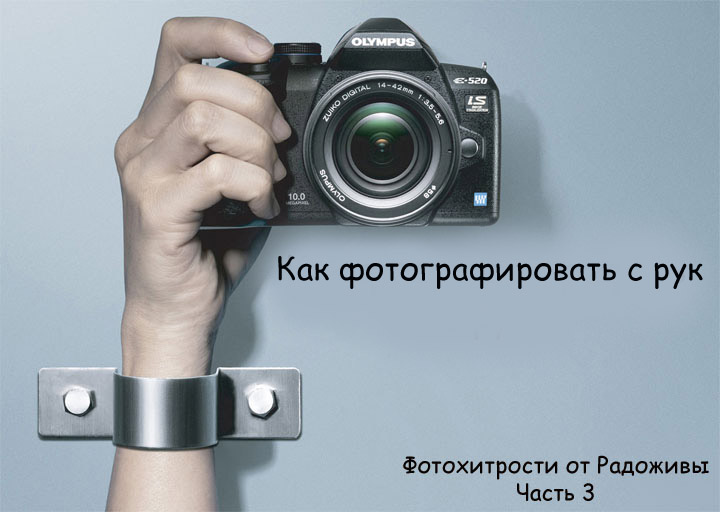 How to take pictures with your hands. Photo Tricks from Radozhiva

The main problem with handheld photography is trembling of these hands. Hands tremble, even if you have iron, you can still get a blurry picture with long exposures. There are several ways to deal with hand shake:

Since there is no time for athletics, money for a tripod and an external flash, just like a stable surface, you will have to experiment with shutter speed. To get a good sharp shot without grease - need to shoot at short exposures. Shorter excerpt - That will make it more likely that when shooting handheld there will be a sharp shot.

How to make the shutter speed shorter?

The second way - increase ISO. The higher the ISO, the shorter excerpt it will be and the easier it will be to get a successful shot. Normally, the ISO changes in the camera menu. On compact digital cameras (on soap dishes), I do not recommend raising the ISO above 800. On advanced SLR cameras, you can set the ISO to taste. More details about the pitfalls of ISO in my article how to configure ISO.

How to shoot in super short shutter speeds with the effect of stopping time, you can read here.

What is the maximum shutter speed? Golden Rule:

There is a beautiful Golden Rule. Need to be removed from handwhose numerical value should be greater than the effective focal length of the lens. Exposure usually measured in fractions of a second. For example, excerpt 1 / 10s indicates that the camera takes a picture within one tenth of a second. Likewise, 1/1250 says the shutter speed is very short and the picture is taken in just one thousand two hundred and fiftieth of a second. With such a short shutter speed, no hand shake is a hindrance. So, if you have a focal length lens X mm, then you need to shoot at a shutter speed no longer 1 / X seconds. Example if you have a focal length lens 50 mm, then you need to shoot no longer 1 / 50 with, usually standard shutter speeds faster than 1/50 s are 1/60, 1/80, 1/100 of a second, etc. Thus, it follows that shooting handheld with wide-angle lenses with a short focal length is much easier than with body lenses with a long focal length.

Attention: when using cameras with a high pixel density, the golden rule requires a little correction. For example, when you shoot on a camera with a lot of pixels, Nikon D7100, D5200, Canon 600D and the like, you should use shorter shutter speeds than using the golden rule. This is due to the high sensitivity of cameras with a large number of megapixels to micro-lubrication due to movement, in more detail here.

How to apply all this in business?

Other ways to overcome hand shake:

Jitter can also be overcome using lenses with stabilizers, which give a gain in 2-4 shutter speeds. Such lenses are slightly more expensive than conventional ones, but they are worth it. You can look, for example, at Nikon 70-300mm f / 4.5-5.6G IF-ED AF-S VR Zoom-Nikkor. More details about stabilizers in my article Image Stabilizers. Also, some cameras have built-in stabilization in the camera. When shooting with your hands, it is better to include these types of stabilizers. But some cameras have a stabilization software solution, it almost always spoils the picture with high ISOs. And some more cameras. eg Pentax K30, have a stabilization system built into the camera itself. If all else fails, you should already think about a tripod or monopod.

Everything is complicated and nothing is clear - there is a way out!

Just turn on the flash. With flash everything is much simpler. The camera will decide everything on its own and you will almost always get a sharp shot. To achieve the best result, you can lower the ISO and set the aperture value depending on the task.

Do not forget to press the buttons ↓↓↓ social networks ↓↓↓ - it is important for me. Thanks for attention. Arkady Shapoval.