If you have a brand new Canon digital SLR camera, or just wanted to squeeze the maximum picture quality from your Canon DSLR and have no money for very expensive professional lenses, manual optics come to the rescue. In countries emerging from the former Soviet Union is very popular Soviet manual optics.

Manual lenses are manual focus lenses. Usually, manual lenses mean old lenses. In the old days, lenses and cameras did not have autofocus. note that Soviet lenses (all Soviet optics) is manual, i.e. cannot focus automatically. To work with a manual lens, you need to focus manually. This can be learned quickly. 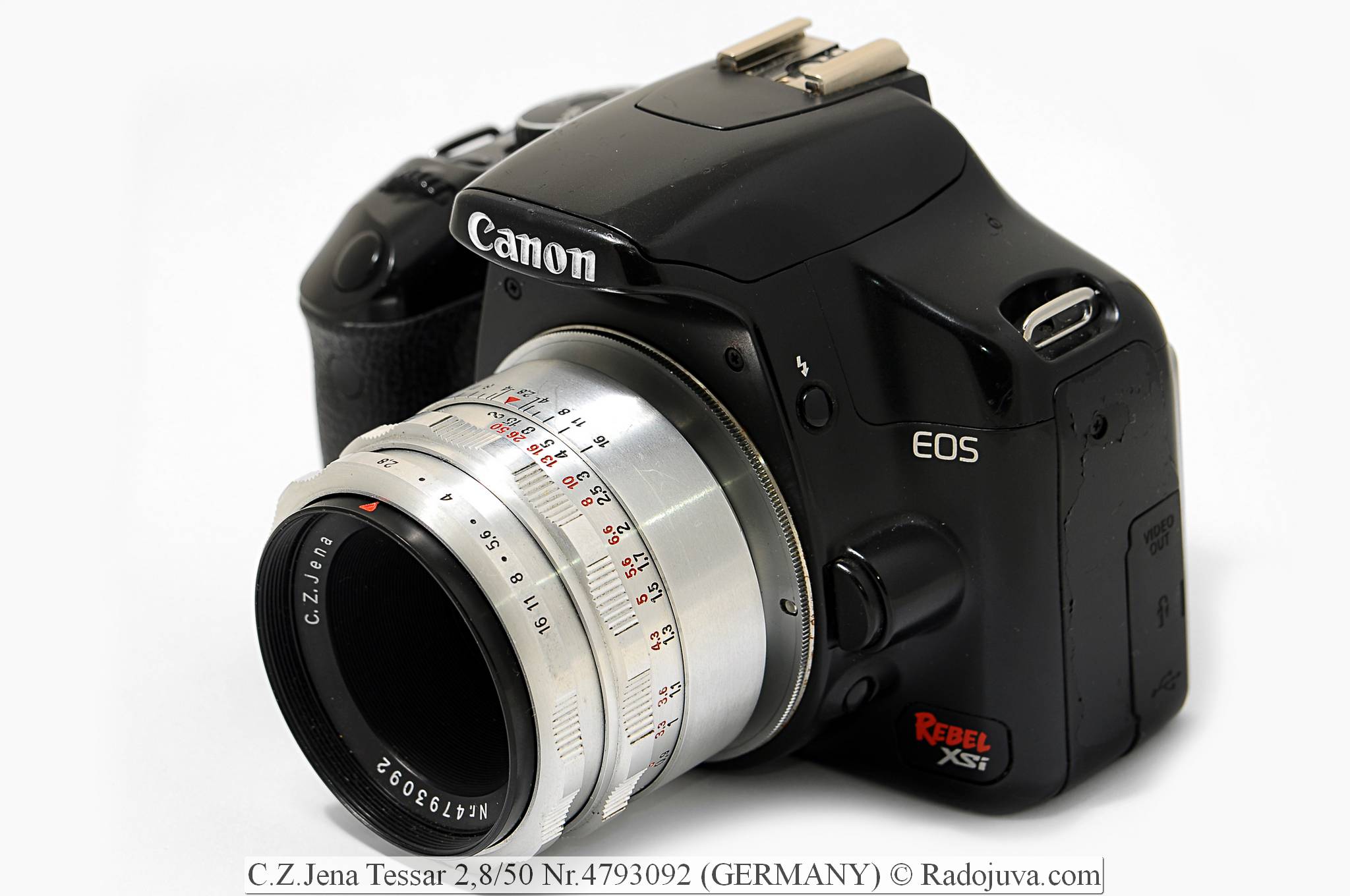 How to use old manual lenses on a Canon system? Very simple, to install an old manual lens on a Canon camera you need to find out what mount (bayonet) the lens is designed for. Basically, there are not so many types of fastening, this is the good old M42 thread, N mount and M39 thread.

M42 lenses need an adapter M42 - Canon EOS. This adapter is screwed onto the lens thread, and then the lens is mounted on the camera. All Canon cameras will automatically measure exposure. Moreover, it will be possible to shoot in any mode of the camera, even in automatic mode, although the aperture will need to be changed manually. It is very convenient to use the semi-automatic aperture priority mode (AV mode). When using an adapter M42 - Canon EOS will remain able to focus at infinity.

Attention 1. When using the usual adapter M42 - Canon EOS without a chip on the camera focus confirmation will not work. This means that you have to focus completely on the eye.

To solve this problem, you can buy an adapter with a chip. The chip usually allows focus confirmation and “tricks” the camera, after which the camera thinks that it has a native lens on it. The chip is also called dandelion, less often Lushnikov dandelion. In the dandelion, you can program the focal length of the lens and the aperture value (you can not do this). Because in EXIF all images of the lens will be indicated on the received images (possibly, except for the focusing distance). You can buy a dandelion separately and attach it to an adapter or buy an adapter with a dandelion right away.

Attention 2. The parameters set in the dandelion (the sewn focus and aperture values) practically do not affect the operation of focus confirmation, but affect the measurement exposure.

An adapter for lenses with a M42 mounting thread can be mounted on Canon EOS digital cutting cameras buy from this link. 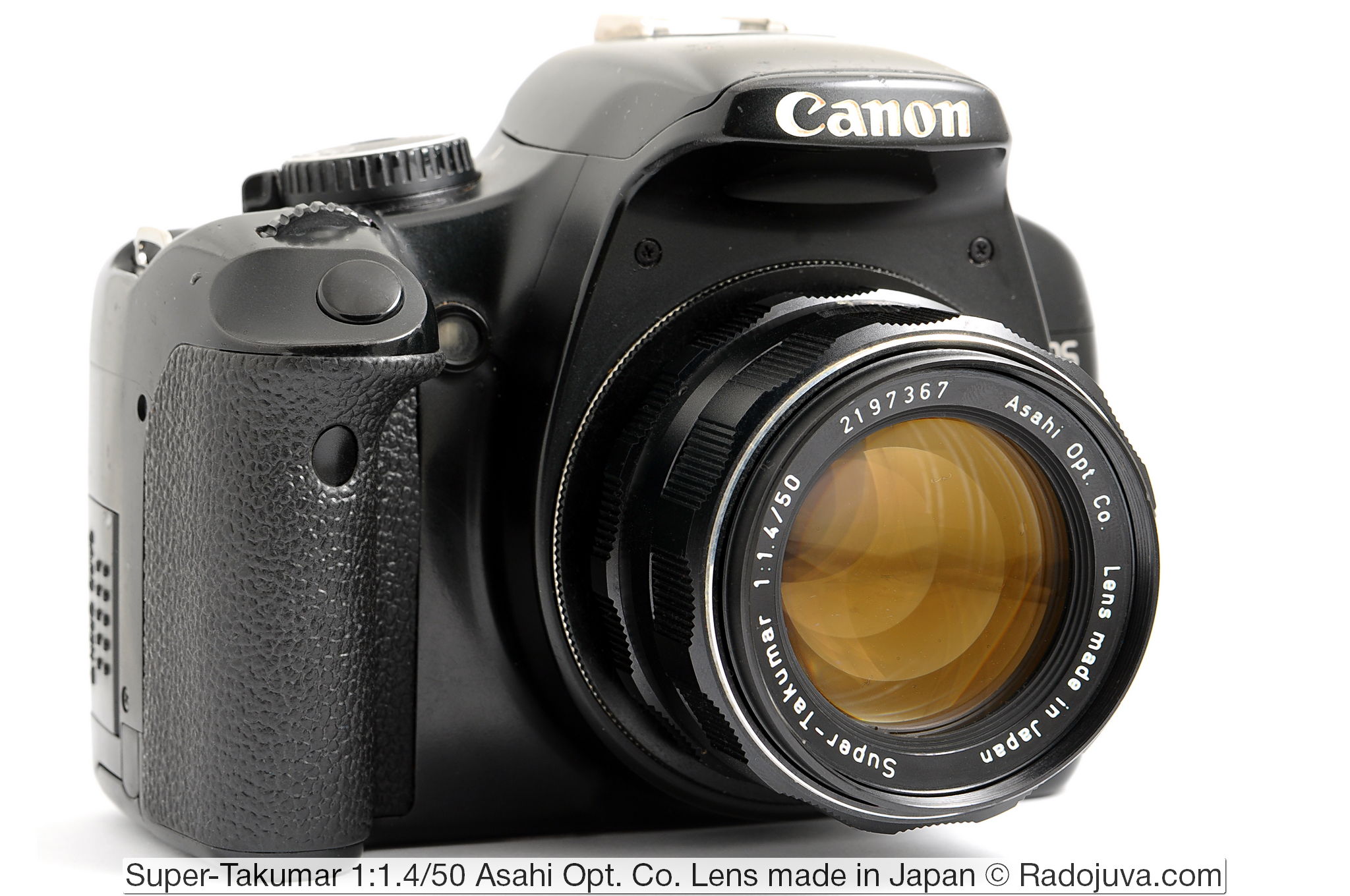 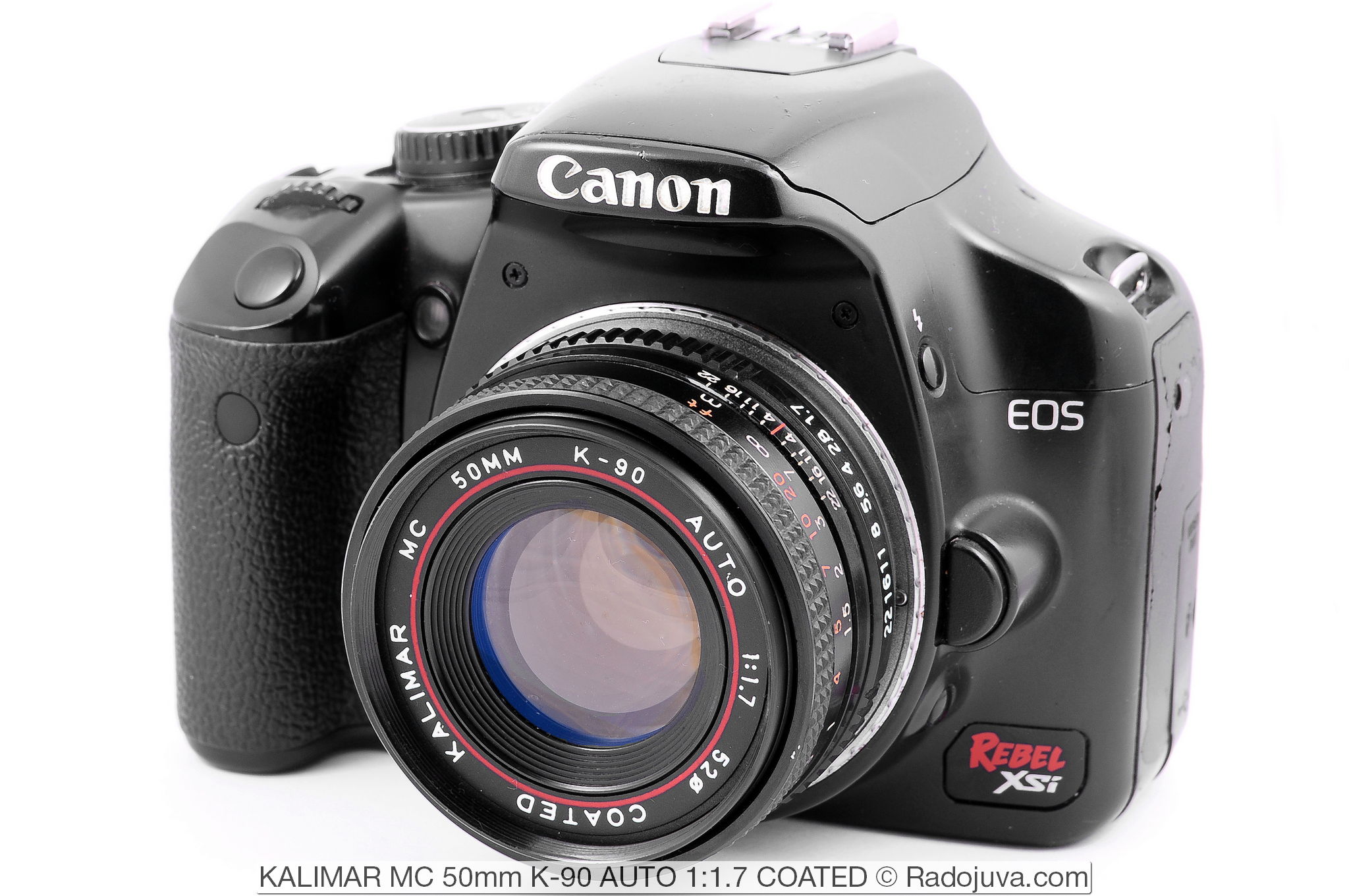 For a lens with N mount, you will need to use an adapter Nikon mount F - Canon EOS. Yes, the N mount is the same as the Nikon system. Similarly, there is an adapter with and without dandelion. The most popular lenses with N mount: Helios-81N, MS Zenitar-N, MS Mir-47N, Mir-20N, MS Mir-24N, Kaleinar-5N, Tele-N, MS Granit-11N. Usually they have the letter “H” at the end of the name. You can read more about this adapter. here. 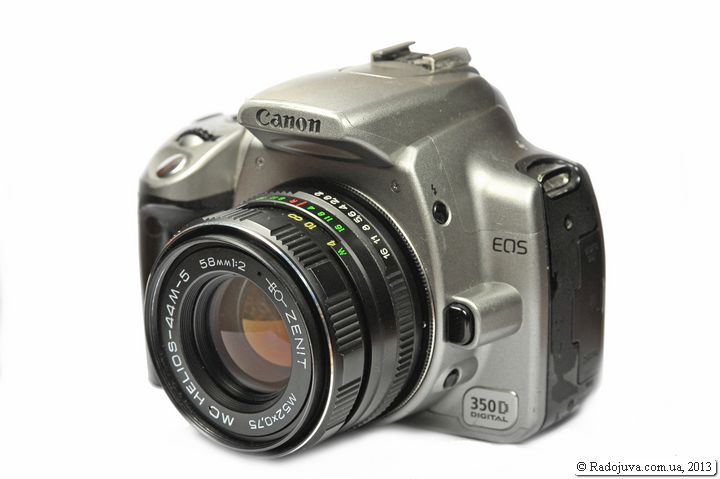 Pay attentionthat lenses with M39 thread are available from two types of cameras - SLR and mirrorless. For normal operation on the Canon system, only lenses from SLR cameras with M39 thread are suitable, for example, such as Helios-44, white jupiter-9. Lenses from rangefinder cameras can only be used in macro mode, in more detail here. 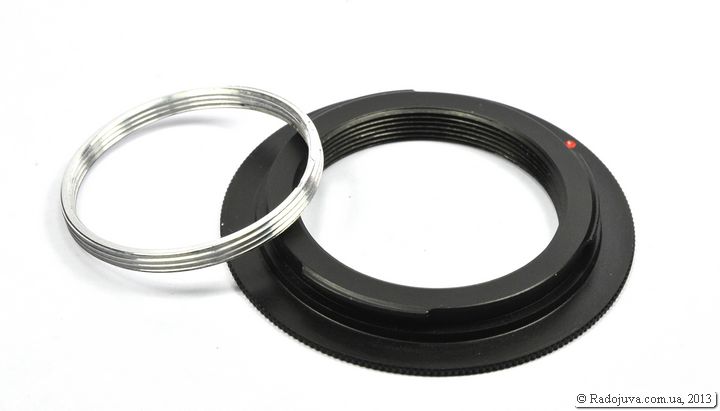 Lenses marked “Automatic” from the Kiev-10 and Kiev-15 cameras cannot be used on modern central control centers, since the lenses have a very short focal distance. I have not met adapters, it will be difficult to re-sharpen, too.

Attention 3. When using lenses from rangefinder cameras under M39 on the Canon system, the ability to focus at infinity will be lost, and indeed, the focus limit will be in a few centimeters. This is due to the different working segments of the native optics and mirrorless. More details are written in the article. Soviet optics on Nikon.

Attention 4. Mount C and B - two different mounts. People often confuse them. Be careful when choosing a lens. 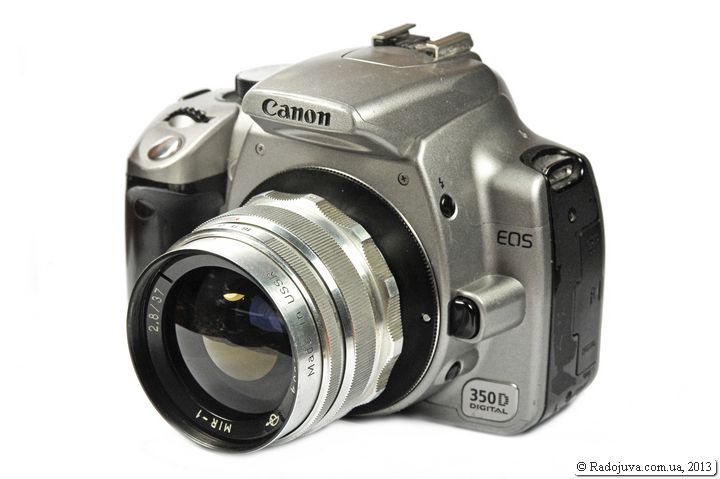 And there are also very interesting interchangeable shank CCCP lenses. Typically, lenses are indicated with the letter “A” at the end of the name. This means that the back of the lens can be changed. You can install, for example, a shank with M42 thread, or with a fastener H, which one is needed. The shank is usually fastened with three locking screws, which are very easy to unscrew and then tighten back. Such lenses include, for example, the legendary Jupiter-37A. To use a Canon camera on a lens, you should install two KP-A \ 42 + M42 adapters - Canon EOS. Well, or absolutely with a perversion of KP-A \ H + Nikon mount F - Canon EOS. 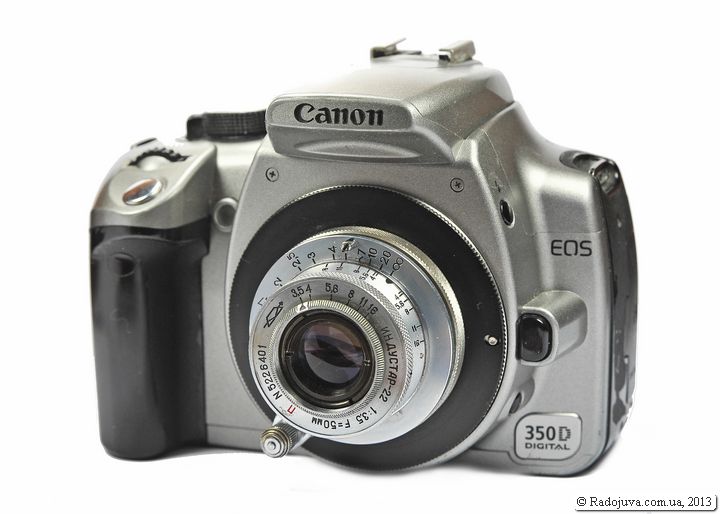 And so, we installed the old lens on the camera - what to do next? When using Soviet optics on Canon cameras, you should always rememberThat:

1. Auto focus will not on no Canon camera, even on the coolest Canon EOS 1DX. You will have to focus manually. Without a focus confirmation chip, it is very, very difficult to focus on sharpness, especially with open apertures. I advise you to immediately get a dandelion (chip).
2. A number of cameras have a mode Live view - it will help to get into focus. Even if a dandelion is installed on the lens, the number of successful frames using focusing using Live View is much higher. It is very convenient to scale images on Live View for even more precise focusing.
3. Some lenses require refinement of the aperture control method. This usually comes down to blocking the blinking diaphragm mechanism so that the diaphragm can be controlled manually.

What is the penalty when using old lenses, new ones are much better, faster, etc. Here is a short answer:

1. Almost everything Soviet lenses suitable for full frame cameras. As you know, lenses for FF are much more expensive. So when changing crop to full frame, you will have a working lens and full frame. And you can also find medium format lenses that won't even give vignetting on the FF.
2. Lenses cheap. Of course, the issue is debatable, but the simple Helios-44m-2 is worth a mere penny, can be found for $ 10, and it gives a very good picture. For little money you can get a fast lens. But due to the boom in Soviet optics, for example, the price of Helios-40-2 reaches 1000 cu
3. Old lenses, when used properly, really give excellent picture resultGet accustomed to many useful photographic things. And for the sake of beautiful photography, all cameras and people work. 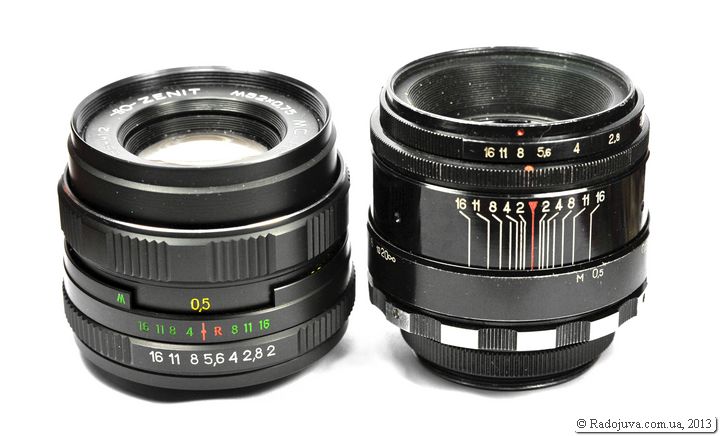 What can you start with from old lenses?

I am often asked what can be taken from the old Soviet optics on Canon, there is no definite answer, since each lens has its own purpose. Coming from the price / quality parameters, I recommend the following lenses:

On modern Canon digital SLR cameras, you can easily use the old Soviet lenses, as well as any other old manual lenses. More often than not, one adapter is enough to mount the lens on a Canon camera.