After thousands of shots taken with a whale lens, and after viewing millions of images on the Internet, shot with high-aperture optics, sometimes you just want to try something new and fast. After the 'boring' stock lens that usually comes with a camera, the tiny Nikon 50mm 1: 1.8D AF Nikkor (MKIII) is a great addition. 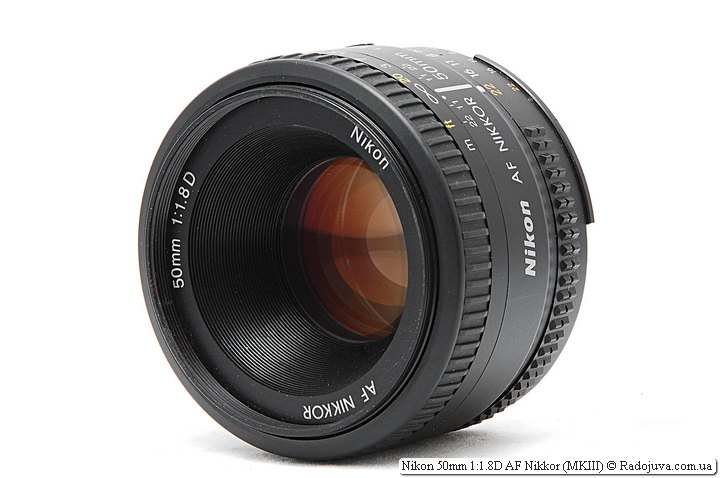 Note that I call this the MKIII because it is the third version of the Nikon Nikkor AF 50mm F1.8 class lens. On the net it is usually called simply - Nikon 50mm F / 1.8D AF, any representation of letters is allowed :).

Details on the lineup of fifty dollars from Nikon can be found in my article 'All Nikon autofocus fifty dollars'.

As they say, the wizard casts a magic wand, and the sorceress uses a magic hole - it is the 'hole' (relative aperture of the lens) that attracts most of all in this lens, the maximum value of which is 1: 1.8. A lens with such a focal length and such aperture suggests that when focusing at close distances it will be easy to get 'bokeh effect'and blur the foreground and background. 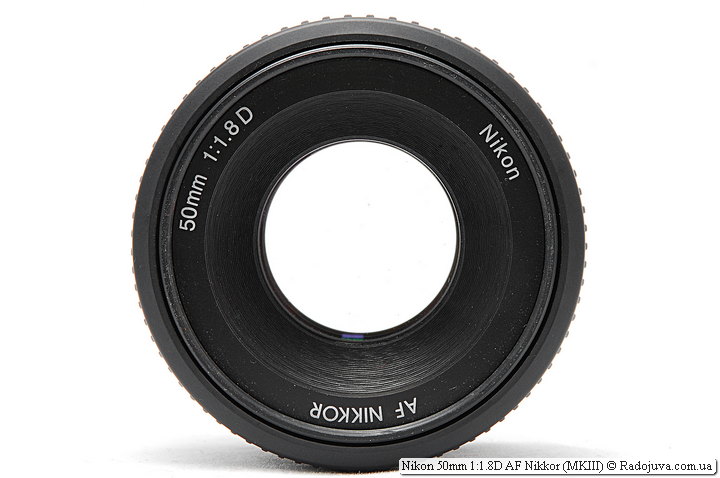 Nikon 50mm 1: 1.8D AF Nikkor (MKIII) - very lightweight lens. It has the smallest weight in its class. Due to its very small size and low weight, you can always take it with you. And finding a 52 mm filter is as easy as shelling pears. I really love hikesand every extra 100 grams of weight is a serious challenge, so instead of some heavy zoom lens I often use the Nikon 50mm 1: 1.8D AF Nikkor.

Nikon 50mm 1: 1.8D AF Nikkor  - one of the cheapest (if not the cheapest) fast fixed lens from Nikon. It is hard to find something cheaper. The lens will allow you to get the necessary experience for a little money when working with high-aperture optics, including fixed lenses. I almost always recommend the Nikon 50mm F / 1.8D AF as the first optional lens. 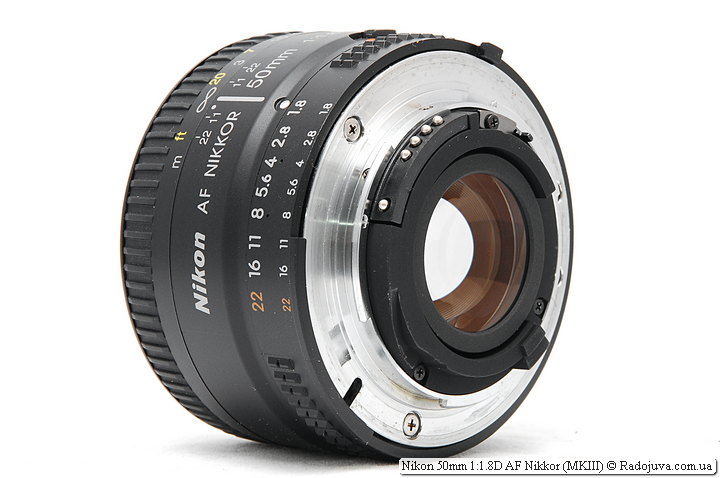 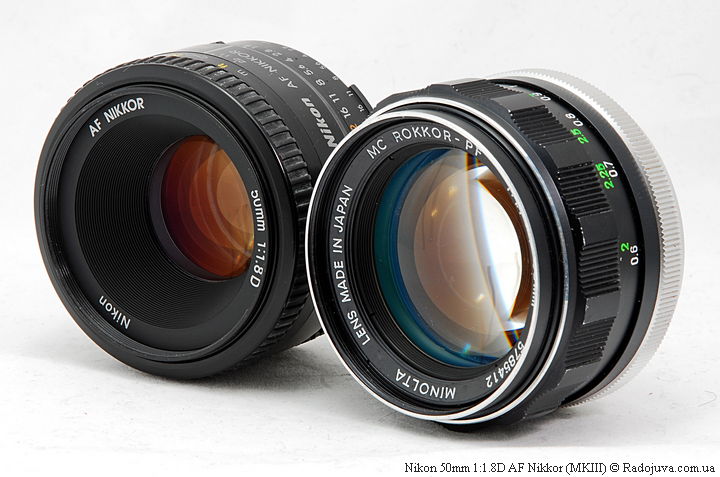 The lens has fast auto focus system - on my camera, the lens focuses from 45 cm to infinity and back in one second. The most interesting thing is that his motorized brother Nikon AF-S Nikkor 50mm 1: 1.8G SWM Aspherical has exactly the same focusing speed. I tested both lenses together. Plus, the Nikon 50mm f / 1.8D AF focuses even faster than the flagship half a ruble - Nikon AF-S Nikkor 50mm 1: 1.4G.

Attention: the fact that the small Nikon 50mm 1: 1.8D AF has no built-in focus motor has nothing to do with focusing speed.

It's important: auto focus with this lens is available only when using him on cameras with built-in motor focusing.

Exact list Nikon DSLR cameras with a built-in focus motor, on which this lens will focus automatically:

Exact list Nikon DSLR cameras without a built-in focus motor, on which this lens will not focus automatically:

Only auto focus and sound confirmation of focus will not work with these cameras, all other important functions, such as automatic exposure metering and automatic iris control, will work well.

You will find a lot of useful information on the types of cameras and lenses Nikon here. 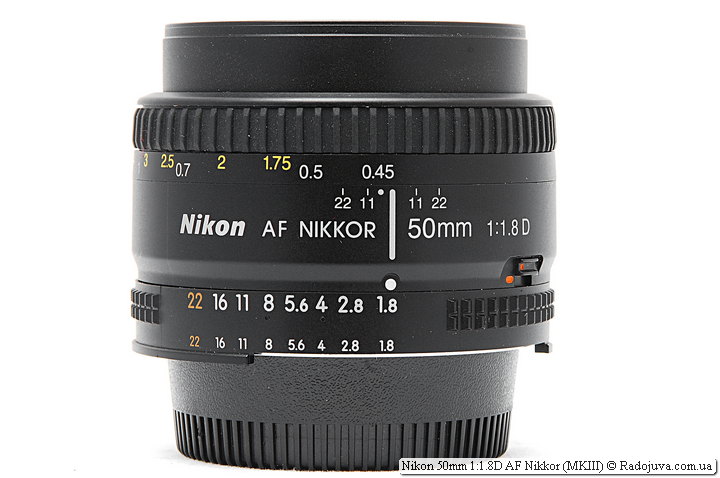 Attention: the lens has a manual aperture ring. To be able to control the value aperture from camera or for automatic installation aperture on modern central control valves, you need to turn the control ring to the F / 22 value (the value is colored in orange) and fix it with a special lever, which is located to the right of the marks aperture. If this is not done, then on a number of cameras, the display will display an error - 'fEE' (ring is not installed aperture) Some cameras having diaphragm rheostatallow you to control the diaphragm with this ring aperturebut only in metering modes exposure 'M' and 'A'. You can read more about this issue in the section on Non-G Lenses. Ring aperture rotates with clicks, the values ​​F / 1.8, 2.8, 4, 5.6, 8, 11, 16, 22 are plotted on it, it is impossible to establish an intermediate value between pairs of numbers. This ring is useful, for example, for reverse macro shot.

Nikon 50mm F / 1.8D AF has focus distance scale. The scale is available in meters and feet, it is very nice and useful. For example, you don’t need to think in which direction the focus ring is rotated, just look at the lens for this. For example, a whale lens Nikon 18-55mm 1: 3.5-5.6GII VR II AF-S DX Nikkor It has neither a focus distance scale, nor a depth of field scale, nor an aperture control ring. 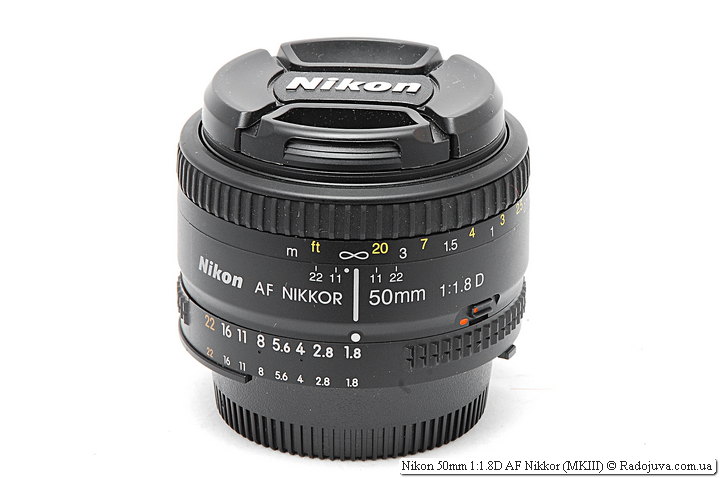 Nikon 50mm F / 1.8D AF has the ability to work on full frame the camera and is a Nikon FX type lens. On the Nikon DX cameras his EGF will be 75 mm. More details about FR and EGF in the section about 'crop factor'.

Nikon 50mm F / 1.8D AF has bayonet mount metal back... This is great news as many people think that the Nikon 50mm f / 1.8D AF is very lightweight and is made out of plastic. 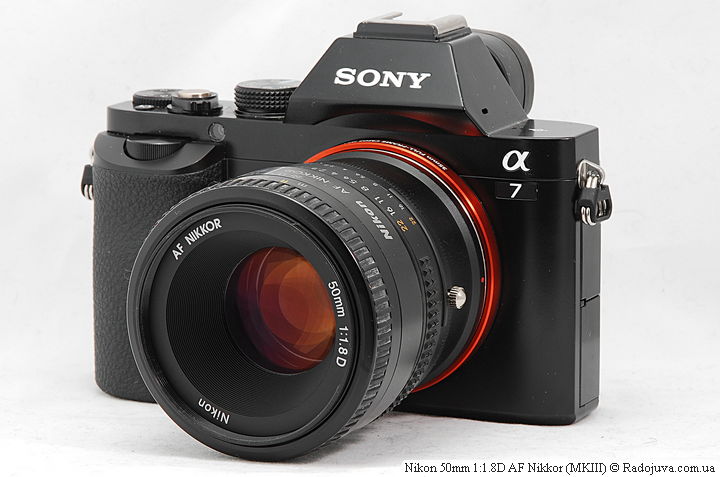 Nikon 50mm 1: 1.8D AF on camera Sony a7. The aperture control ring allows you to use the lens on any camera through the appropriate adapter.

When focusing front lens does not rotate. This allows you to easily use different filters and not worry about their shifts when focusing. The focus ring is rubberized and rotates 120 degrees, but in order to slightly shift the focus ring, you need to 'tear it off'. At the same time, smooth focusing is lost, since after such a “jerk” the ring flies over the desired value. The effort is not so great, but when working in macro mode, where, due to the very small depth of field, each degree of rotation plays a huge role, this “slightly twitchy” method of focusing greatly inflates the nerves during manual focusing. There is a similar effect on many other lenses, most pronounced on the 'dark' Nikon ED AF-S Nikkor 24-120mm 1: 3.5-5.6G SWM VR IF Aspherical. Nikon 50mm 1: 1.8D AF Nikkor users who always shoot with autofocus will most likely never notice the effect described above. Also, it is worth noting that the previous version of this lens, namely Nikon AF Nikkor 50mm 1: 1.8 (MKII, MIJ version)had no such problem. 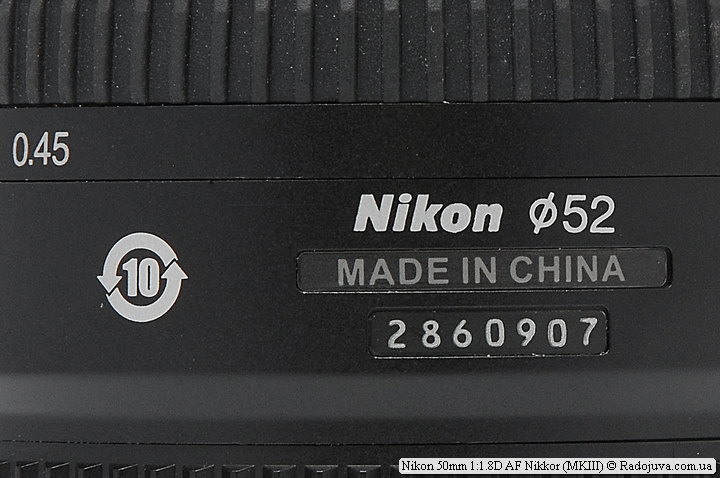 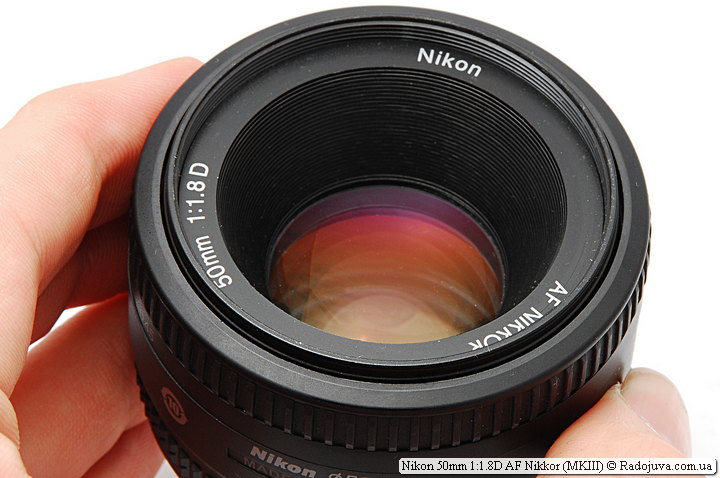 Enlightenment of the front lens of the Nikon 50mm 1: 1.8D AF Nikkor lens

With all the pros and cons Nikon 50mm 1: 1.8D AF Nikkor - an indispensable lens in all situations. For me personally, it is inconvenient in that the auto focus on my camera does not work Nikon D40which I often use. On the open aperture, the sharpness zone is very small and it’s very difficult to manually enter it. 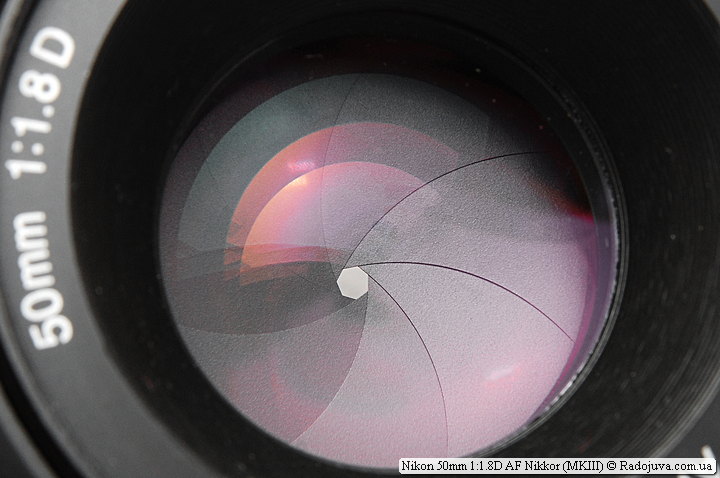 All photos in the gallery below are shot on a Nikkor 50mm 1.8D AF and full-frame camera. Nikon D700 FX, photo without processing, only the size is reduced to 3MP and data from EXIF.

Jpeg source photos download from this link (1.09 Gb). The archive is 453 photosfilmed in 6 months on Nikon D70. Oddly enough, but I enjoy working with this old and very cheap Nikon D70 both old and very cheap Nikon 50 / 1.8... The camera cost me $ 50, the lens - $ 90. On a 6 MP CCD sensor, even at F / 1.8, acceptable sharpness is obtained. I did not regret the shutter and filmed as much as my soul wanted. Photos from this collection are used by me in an article about choosing a Nikon DSLR. Examples of photos with processing can be found in my gallery here. You can see more examples of photos on Nikon 50mm 1: 1.8D AF Nikkor (MKIII) in the review Nikon D300 и Fujifilm FinePix S5 Pro и S1 Pro.

And also this link You can see my gallery of pictures obtained with the help of an old man Nikon D100 (Nikon's first digital SLR camera in a classic case) paired Nikon AF Nikkor 50mm 1: 1.8 (MKII, MADE IN CHINA). 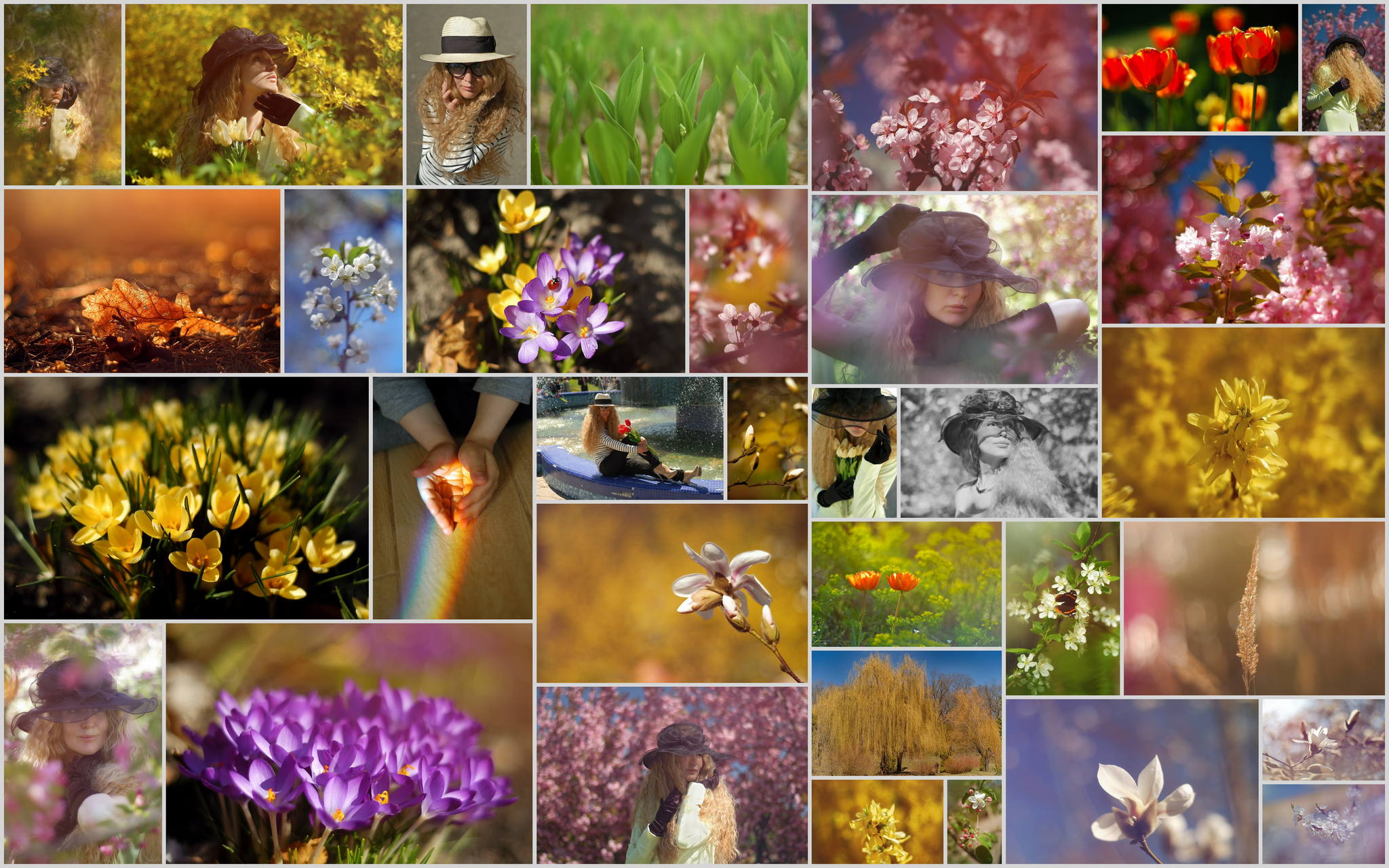 All pictures were taken with Nikon AF Nikkor 50mm 1: 1.8, MKII version, MIC (MADE IN CHINA) и Nikon D100. Enlarge Image or go to the gallery with large format photographs.

A list of all-all Nikon Nikkor autofocus lenses, as well as my recommendations for choosing the best option for specific tasks, can be found in the 'All Nikon autofocus fifty dollars'.

I really love the Nikon 50mm 1: 1.8D AF Nikkor. This is my first autofocus fast aperture lens, which I used in a wide range of photo tasks and spent a huge number of shoots with it.

A huge number of lenses from Nikon (hundreds of models) passed through my hands. In my personal opinion, the Nikon 50mm 1: 1.8D AF Nikkor is one of the best lenses of all time from Nikon.

Real prices for the lens in popular online stores can see here, or in the price block below:

Also, this lens can be found on:

Comments on this post do not require registration. Anyone can leave a comment. For a catalog of modern lenses, see Moyo.ua. 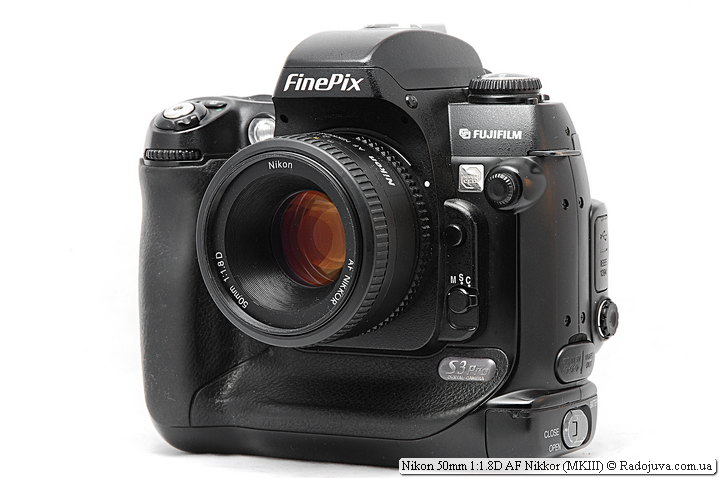 Nikon 50mm 1: 1.8D AF Nikkor (MKIII) - great lens for the money... Due to its compactness and lightness, the Nikon 50mm 1: 1.8D AF Nikkor (MKIII) can always be taken with you. It can produce very sharp images with slightly rough bokeh. On DX cameras it can be used as a conventional portrait lens. The lens' only serious drawback is the lack of sharpness at apertures from F / 1.8 to F / 2.8.